A year ago, Sister Susan Njoroge had just wet-processed coffee beans for the first time, but the results smelled more like a barnyard than like beans.

To be fair, she didn’t know anything about Arabica coffee back then. A member of the Assumption Sisters of Nairobi, she had arrived at Ngoigwa Parish during the coffee harvest and was expected to manage the picking and processing while overseeing 40 women who work on the farm and depend on the harvest for income. She also lacked processing facilities, and was forced to improvise.

“When I came here, the coffee was ripe. It was during the harvest, but I didn’t know what to do with it,” says Sister Susan. 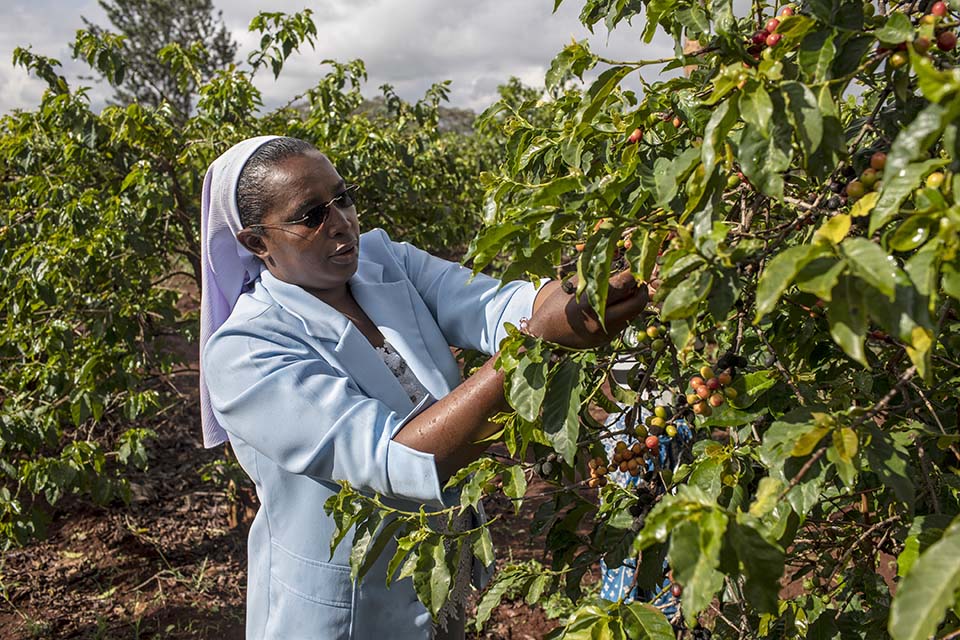 Sister Susan Njoroge of the Assumption Sisters of Nairobi, Ngoingwa Parish, picks coffee on the congregation's farm in Thika, Kenya.

In addition to coffee, the sisters grow vegetables and run a small dairy. “I thought that for fermenting coffee, I could use anything,” she says, and chose to use the cattle trough.

During wet processing, the outer cherry skins and pulp covering the coffee beans are removed. This is done by feeding the coffee cherries along with water through a pulping machine. The beans are then fermented in tanks for 14 to 36 hours depending on volume, depth and temperature. To ensure uniformity, premium beans are soaked for 6 to 12 hours. The beans are then typically washed, graded, separated according to grade, and dried in the sun on raised racks.

Being unversed in coffee production, Sister Susan skipped the entire grading process. After fermenting and drying the beans, she took them to sell to a local coffee buyer, who literally turned his nose up at her. 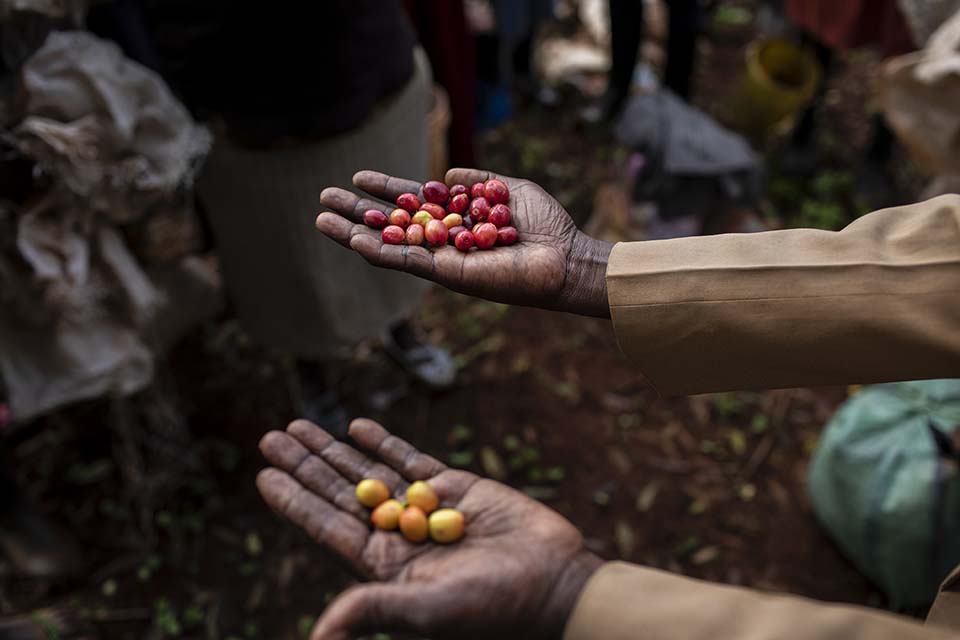 Kenyan coffee is known for its rich aroma. Unfortunately, that’s not what the buyer got a whiff of.

“The problem was that after testing the beans, we discovered they were contaminated with cow dung,” Sister Susan says. “Can you imagine? The coffee was in a very bad condition. It smelled like cow dung, it was not clean and the color was totally brown.”

In addition, because she had skipped the grading process, she had to sell below market rate. But this last mistake was not uncommon. Lacking know-how and resources, coffee producers in Kenya often struggle to manage their farms or process their coffee in a manner that would garner top prices. 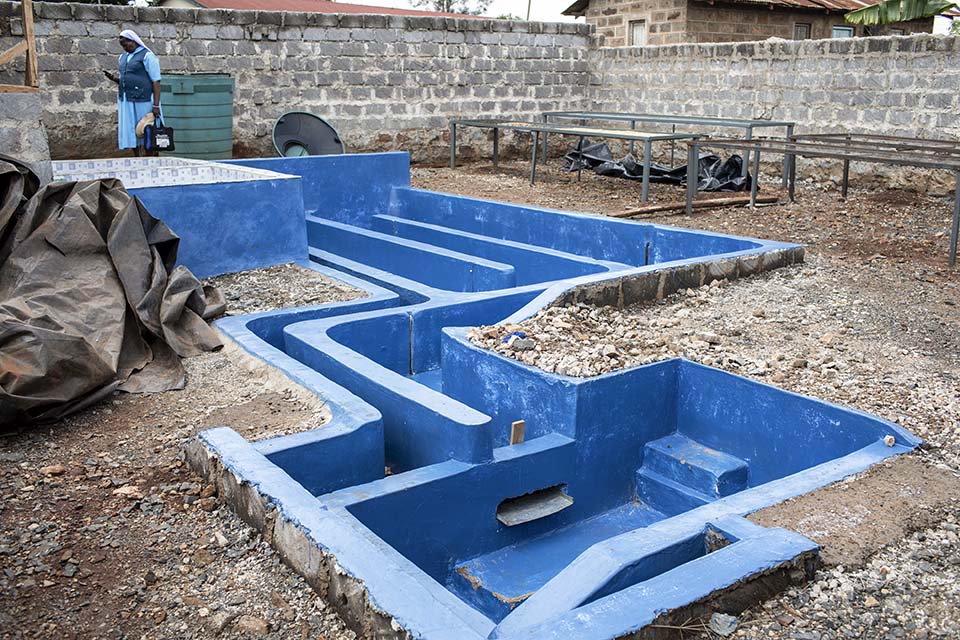 Coffee is processed at the Assumption Sisters of Nairobi congregation's wet mill in Thika, Kenya.

Catholic Relief Services has been working with Sister Susan’s congregation since 2014 through the Strengthening the Capacity of Women Religious in Early Childhood Development—or SCORE ECD—project. With support from the Conrad N. Hilton Foundation, SCORE ECD works through national associations of sister congregations in Kenya, Malawi and Zambia to improve early childhood development services, increase sustainability in key areas where the congregations are active, and strengthen the practical knowledge, skills and capacity of religious organizations through trainings, mentorship and regular follow up.

In 2018, Project Coordinator Sister Pauline Acayo and CRS coffee expert Michael Kimani conducted an assessment at the congregation’s farm in Thika and identified coffee as a potential source of sustainable income. It was decided that CRS would support the congregation’s coffee farm through private funding. But much would need to improve.

Sister Susan laughs and says, “I showed them where I was doing the fermentation in the cattle trough. They just looked at me, and they were surprised.”

“We never expected to see something like that,” CRS’ Kimani says. “Normally people without facilities will end up fermenting in plastic tubs.” Doing the fermentation in a cattle trough, he explained, not only diminished the quality of the coffee, but also introduced contaminants such as feces and mold, and meant that it was impossible to grade the beans. 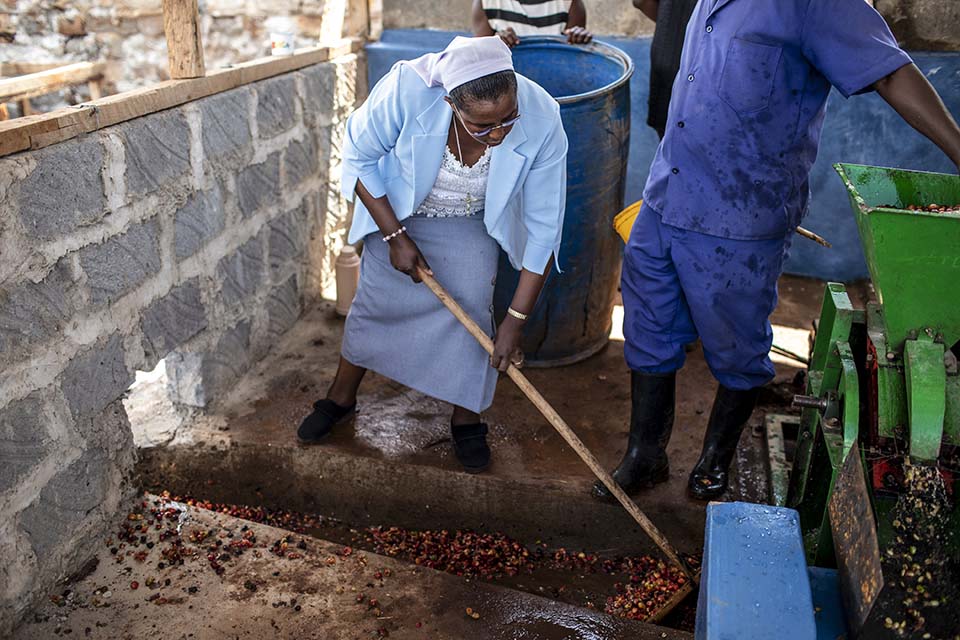 In May 2018, CRS invited four sisters from Assumption Sisters of Nairobi and six others from the Immaculate Sisters of Nyeri to attend a one-week training course at the Kenya Coffee Research Institute. It was there that the sisters learned best practices related to coffee farming including pruning, weed control, harvesting at peak times, using the correct fertilizers, and how to identify and treat coffee diseases.

“I was able to learn so many things,” Sister Susan says. “I came to realize we were making a lot of mistakes, especially while we were pruning.” One of the more damaging errors was that they were not pruning old, poorly producing limbs. Instead, they were cutting tender new branches simply because they were smaller. They learned the practice was weakening their coffee crop.

“We were also picking at odd times,” Says Sister Susan. “We were not following the correct season. Our coffee was not producing well, it was all overtaken by bushes, and it had diseases. But I didn’t know about these things.” Still, she was optimistic.

“When I returned from the course, I was very excited because I had knowledge and knew where to start improving the coffee,” Sister Susan says.

But it wasn’t only the sisters who were counting on the coffee.

As a form of social outreach, the congregation at Ngoigwa Parish employs 40 women from vulnerable backgrounds on its farm and in its dairy, providing them with a reliable source of income. Most of the women have no other livelihood or employable skills when they arrive.

When 38-year-old Mary Wanjiku’s husband abandoned her, she was left with no means to support herself or her three children. 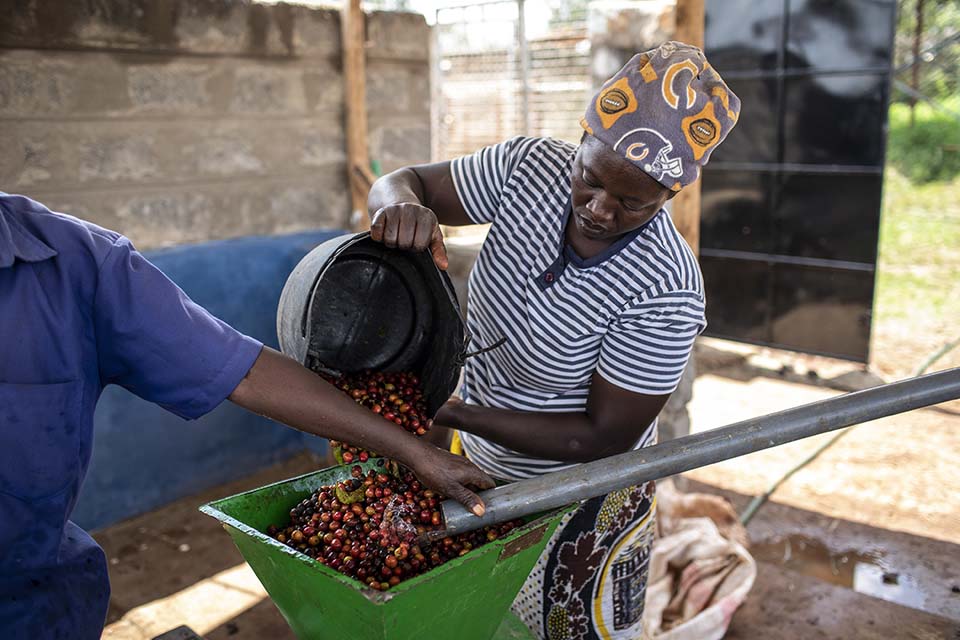 “My husband was drinking alcohol all the time. We had so many arguments. One day he decided to walk out and never came back,” Mary says. “It was torture because I had to find a way to feed the kids. All my children were young and looking to me to provide.”

The family struggled for almost a year, with no fixed residence and little access to food.

“There were days we would go hungry, so many I cannot count. And threats from the landlord that we would be evicted for not being able to pay the rent,” Mary recalls. “The children’s health was not good during this time. Usually one to two days a week we would just have porridge. Each kid would have just one cup and then go to sleep.”

Eventually Mary realized she was not alone, and that other women in her community had faced similar challenges. “I started looking for women who’d had similar experiences and started reaching out to them,” she says.

Milka’s husband, who suffered from depression and attempted suicide on multiple occasions, had left her not long before Mary’s breakup. Like Mary, she struggled for a time, but after five months she approached the congregation at Ngoigwa Parish in Thika, where she was hired as a laborer on their coffee farm.

Milka recalls the day she started working. “The farm had been abandoned and it was overgrown with weeds. We started clearing it bit by bit,” she says. As the women and sisters rehabilitated the farm and the trees, they learned a lot about coffee production.

“I learned on the job how to prune, stump a tree and select the healthy suckers—the new shoots that grow and finally become trees,” Milka explains. “Now I am knowledgeable in primary processing,” which involves pulping, fermenting, washing, the separation of grades and drying. 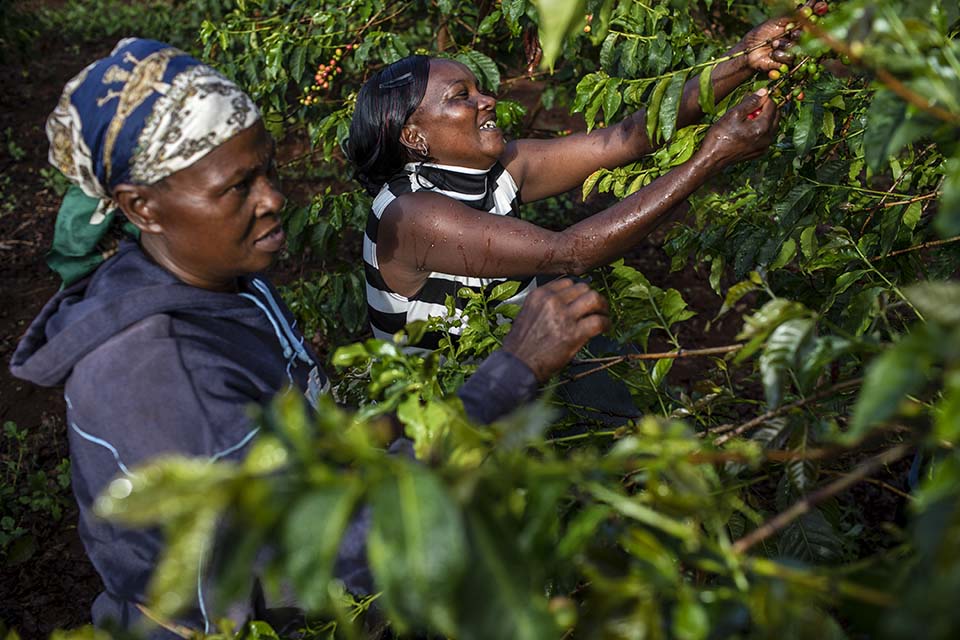 Milka Warimu, right, and another woman, pick coffee at the Assumption Sisters of Nairobi congregation's farm in Thika, Kenya.

The regular income from working on the congregation’s farm and dairy meant that Milka and her family could rent a house long-term, cover school fees and put food on the table.

Milka told Mary how working with the sisters had improved her livelihood and financial stability.

“She encouraged me to come work here, and later I joined the team,” Mary says. Like Milka, she picked up new skills fast.

“I was working as an apprentice, observing what they do and then someone would guide me. By the time we were done, I had been trained,” Mary says.

To solve their processing woes, CRS helped construct a wet-mill facility at the congregation to improve the quality and consistency of the coffee produced. The mill consists of a coffee pulping machine, two fermentation tanks, washing and grading channels, drying tables and a new perimeter wall. The sisters and their team are now able to pulp, ferment, grade and dry their coffee, making their final product far more appealing to external buyers. 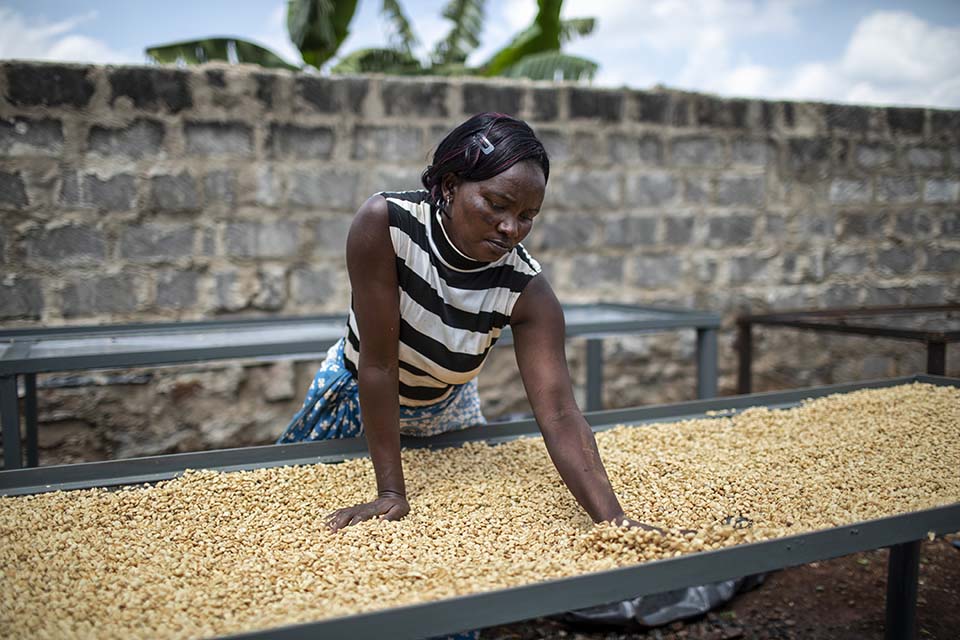 With that in mind, the congregation was linked up with Sucafina, a Swiss coffee trading company. The North American branch of the company has since signed an agreement to purchase the congregation’s coffee over the next five years, helping to ensure the sustainability and future prosperity of the coffee farm.

A year ago, when the sisters were producing an average of 2-3 tons, and selling ungraded and contaminated beans to the local buyer, they were earning just $82.50 per 110-lb bag. This year they expect to produce to 6-8 tons over two seasons, which should fetch an average of $350 per bag.

“I am happy that the new skills and knowledge gained during the trainings and mentoring have been put into practice by the sisters. They are producing and harvesting more coffee, and the pests and weeds are under control,” says Sister Pauline. “All of this will enable the congregation to become more sustainable and self-reliant instead of depending on donor funds.”

Those benefits have reverberated outward as well. With the money Mary is earning now, she has been able to provide far more stability for her children. 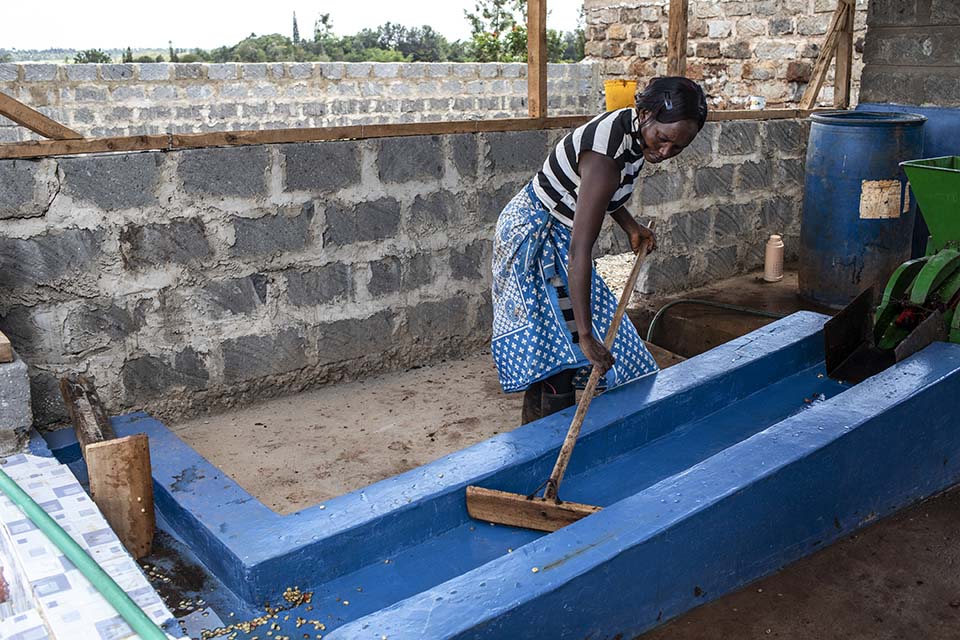 Her children, she says, are also doing better in school. “Compared to the past when they could not concentrate or do homework, now they can focus better because they have enough food.”

“The future is bright because I can see I will be able to send all my children through school, and by the time I am old I will already have my own piece of land and build my own house.”

Because of their newfound confidence, the sisters have set their sights on doing even more in the future.

“From the cow trough to the coffee factory, you can see there has been big progress,” Sister Susan says. “Within five years we want to be roasting our own coffee. I am really praying hard to reach that point.”

We seek daily renewal from the source of all life, and so we pray ... END_OF_DOCUMENT_TOKEN_TO_BE_REPLACED

Our walk with God is reflected in our walk with others, and so we pray ... END_OF_DOCUMENT_TOKEN_TO_BE_REPLACED