Ashaa’s frail frame and weary gaze suggest someone who is accustomed to hardship. She lives in a small apartment in the town of Zarqa in Jordan, with her husband, who is sick, and five children. The family fled their native Syria, and now relies mostly on aid to survive.

But something changes in Ashaa’s demeanor when she starts talking about the educational support her family receives through Caritas Jordan with Catholic Relief Services and other partners. She comes to life.

“Before coming to Caritas classes, my children used to be down and depressed. They didn’t have anything to do. They didn’t have routine,” Ashaa, 31, says.  “Now I’ve noticed a change in their behaviors. They’ve become more relieved, more excited.”

Jordan, a Mideastern country bordering Syria, is home to more than 600,000 refugees, more than half of whom are children.

With the Syrian war well into its fifth year, government resources in neighboring countries like Jordan are stretched thin. That has resulted in long waiting lists for Syrian families trying to enroll their children in school. It’s estimated that fewer than half of the Syrian children in Jordan are receiving formal education. 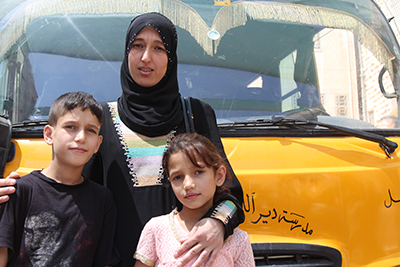 Ashaa, her son Jara and daughter Waed, with the bus they’ll ride home after participating in CRS and Caritas educational programming in Zarqa, Jordan. Photo by Nikki Gamer/CRS

Since the crisis began, the educational programming has grown exponentially, from a few partner schools with a few hundred students to nearly 6,000 students in 21 schools. Support comes from CRS donors, Caritas Austria, the U.S. State Department’s Bureau of Population, Refugees and Migration, and the Catholic Agency for Overseas Development.

“With more resources, we have the potential to double this number in the coming years,” Ryan says. 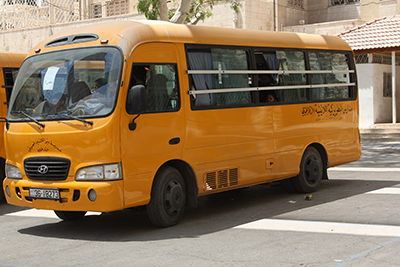 Ashaa’s 10-year-old daughter Waed, who is on a public school waiting list, takes catch-up classes intended for primary school-age children who have missed significant years of formal education. The classes help students with basic education to pass government-recognized exams and, prepare them for formal schooling should the opportunity arise. Given the duration of the conflict, many children have been out of school for years. Others have missed out on formal schooling entirely.

“Before Caritas, my daughter didn’t know the alphabet. Now she can read,” Ashaa says. “When the news comes on, she reads me what’s on TV.”

It’s not just Ashaa’s children who are benefiting from the educational programming. Daylong workshops for parents help them with issues like handling bullying, and supporting children at home and school.

“I’ve learned that I should insist that all of my children go to school so that when they grow up, they can help themselves have a better future,” Ashaa says.

Ryan explains the importance of supporting parents as well as students:

“Navigating the education system in host countries and the continuously changing requirements and opportunities can be challenging,” she says. “The program ensures that parents are well aware of all the existing opportunities and are provided support in accessing them.”

Ashaa describes how the educational support has improved her family’s overall outlook:

“On Caritas school days, my kids wake up early and wait outside for the bus,” she says. “Even me. When Caritas calls about an event, I get really excited because I usually have nothing to do. But after I attend a session at Caritas, I go home with a lot of energy.”

Ashaa and her family face an uncertain future. But Ryan warns that there is great danger in leaving such families behind.

“Without the academic rigor and sense of normalcy and structure that attending school provides, these children risk suffering from unhealed emotional wounds, and they lose out on educational development,” Ryan says. “This could have a profound impact on Syria’s long-term resiliency and recovery.”

August recess is a key moment to meet with your members of Congress while they are out of session... END_OF_DOCUMENT_TOKEN_TO_BE_REPLACED

Watch videos on the issues of hunger and climate change here. END_OF_DOCUMENT_TOKEN_TO_BE_REPLACED