It you weren't looking for it, you'd probably miss the small office tucked away in the labyrinth of streets that make up old Damascus. But the small space provides a much-needed service for thousands of Iraqi refugees who have fled to Syria since the invasion of Iraq in 2003. In fact, this service is so popular, there's a list of refugees waiting to enroll.

For the past 4 years, Catholic Relief Services has supported the Chaldean Catholic Diocese of Aleppo to bring quality health care—a cherished commodity in 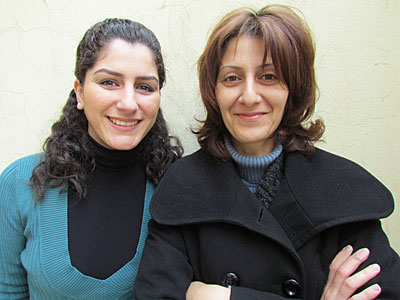 Good health care is hard to come by in Syria, especially for Iraqis living in and around Damascus. Syria is home to the largest population of Iraqi refugees in the world. Although the country opened its borders to nearly half a million Iraqis who fled the violence in their homeland, the spike in population put a huge strain on social services—health care, in particular.

"So we try to reach out to as many Iraqis as possible," says Vivian Manneh, former CRS regional program manager in Syria. "During one year, we saw almost 2,000 refugees who needed some type of medical assistance. And the good thing is, they can be seen by more than one doctor, if necessary."

At an office that's about a 5-minute walk from a Chaldean Catholic church in Damascus, the program provides free or reduced-fee medical services to the Iraqi refugee community living in several neighborhoods in the area. News of the office spread quickly in the parish and neighborhood. "Right now, the demand is so high that we have a waiting list," says Manneh.

"We're able to contract with local doctors in Damascus who see the need and are willing to provide health care to the Iraqi refugee population for free or at a reduced cost," says Randa Alam, who works at the office.

"People don't receive cash to pay for the service, but rather a voucher that they take to the local doctor who has agreed to work with us," she adds. "We do the initial consultation here at this office and find out whether they need to see an internist, an optometrist, an orthopedic specialist—whatever they need. We also do a means test to be sure they're really in need. The only thing we don't do is offer referrals for heart surgery. That's about it. Almost every other specialty is available."

The doctors see all types of patients—young, old, singles or entire families. Some of the most common medical issues facing Iraqi refugees are hypertension and diabetes. But they also face much more serious diseases. In particular, the incidence of cancer is unusually high among Iraqi refugees. Research suggests it's because of the chemical weapons used in Iraq during the reign of Saddam Hussein.

Dunnia Matta, who works at the office, fled from Iraq to Damascus a few years ago. "After the Iraq War started, we had no choice but to leave. It was just too dangerous to live in Iraq," she says. "We decided to come to Syria, and although we're more secure, life in many ways is much more challenging. There are 14 of us in my extended family. We can't afford to all split up and pay rent for several different apartments, so all of us share two rooms and a hallway. It's really stressful."

Her family also attends the local Chaldean Catholic church in Damascus. "People at our church are really thankful for the support of CRS," she says. "You can't imagine how expensive it is to live here in Syria. Rent is so high, and most of the people I know are running out of money. To get medical care at such a good rate is giving them some hope that people still care—that they aren't just forgotten."

CRS has continued to support the Chaldean Catholic Diocese of Aleppo through what has been a year of unprecedented violence in Syria that has led to a humanitarian disaster. As Mark Schnellbaecher, CRS regional director for Europe and the Middle East, says, "I think it's very important for organizations like ours to continue to remain engaged there—not just for the Iraqi refugees, who have become even more vulnerable in the midst of this conflict, but to be there when the dust settles in Syria. No doubt it will be a much different place. Hopefully we'll be there to help put it back together again."

Read the latest update from CRS country programs and partners around the world as they respond to... END_OF_DOCUMENT_TOKEN_TO_BE_REPLACED

Read the latest two-page summary from CRS country programs and partners around the world as they... END_OF_DOCUMENT_TOKEN_TO_BE_REPLACED