When you walk into the Shabo home in Bashiqa, a town in the Nineveh Plains of Iraq, you will see fresh paint on the walls, new fixtures in the bathroom and recent electrical work throughout the house. Along with the repairs, there’s also a smoke-damaged air conditioner and exposed wood in the ceiling that still needs plastering—signs of what happened when ISIS fighters occupied their town for 3 years. 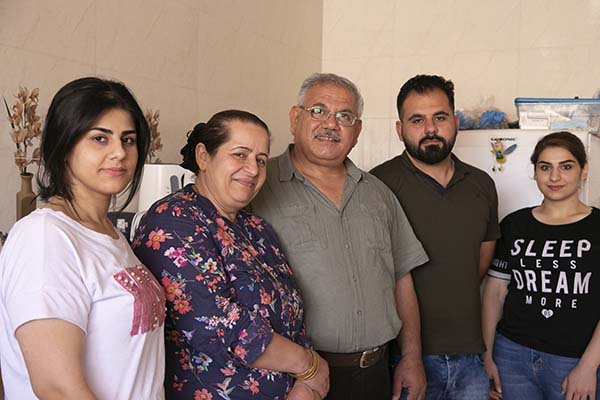 The Shabo family returned to their home in Bashiqa, Iraq, in 2017, after being displaced for three years. Three rooms in their home were burned, and much of what was inside was damaged, destroyed or stolen. Photo by Megan Gilbert/CRS

“It was miserable,” Louis Shabo says. “All the furniture was broken, three rooms were burned, clothing in the house that wasn’t ours was burned. A bomb had hit our kitchen and burned the kitchen.”

“Christian” was also written on the wall. A mark most probably put there by ISIS fighters who occupied the house for more than three years. The Shabo’s house was so badly damaged they considered returning to Dohuk, where they lived when they were displaced. But they decided to stay and try to fix it.

“We did a lot of work,” Louis says. “We rebuilt the fence and we removed all the debris from the house. We did the tile for the kitchen.”

Still, because of the extent of the damage, it was difficult for them to complete the repairs. With funding from USAID’s Office of Foreign Disaster Assistance, Catholic Relief Services provided a cash grant so the Shabos could plaster the charred walls, install new sinks and faucets that were damaged or missing, and fix the electricity.

“With the cash, we could do what we wanted,” Louis says. “The team was so helpful. They were coming every two weeks to see what we did.”

The Shabo family is pleased with the progress so far, but it’s hard to feel settled. They are worried ISIS might come back.

“We care about the children,” Louis explains. “I want my kids to live in a place that is safe and secure, and that has opportunities.”