Photo by Peace Maidawa/DDI for CRS

“I’m very happy that my farm will improve and that I will experience progress going forward. I have the knowledge now and am looking forward to next season.”

Carlos Emmanuel has farmed most of his life. Carlos’ father taught him everything he knew about farming. He helped his father on the farm as a teenager and went into full-time farming when he completed school at the age of 18.

Now 46 years old, Carlos owns a 10 acre farm in the community of Uvu in northeastern Nigeria, where he farms corn, peanuts and black-eyed peas. Prior to 2020, Carlos estimates that each season on average he harvested 50 bags of corn, 30 bags of peanuts and 5 bags of black-eyed peas, at 220 pounds per bag.

But Carlos could have been harvesting twice  as much with simple changes to his farming practices—and without  greater investment. His old farming practices, such as planting seeds that were recycled from his harvest and using the broadcast method of fertilizer application, did not allow him to maximize his farm’s potential. 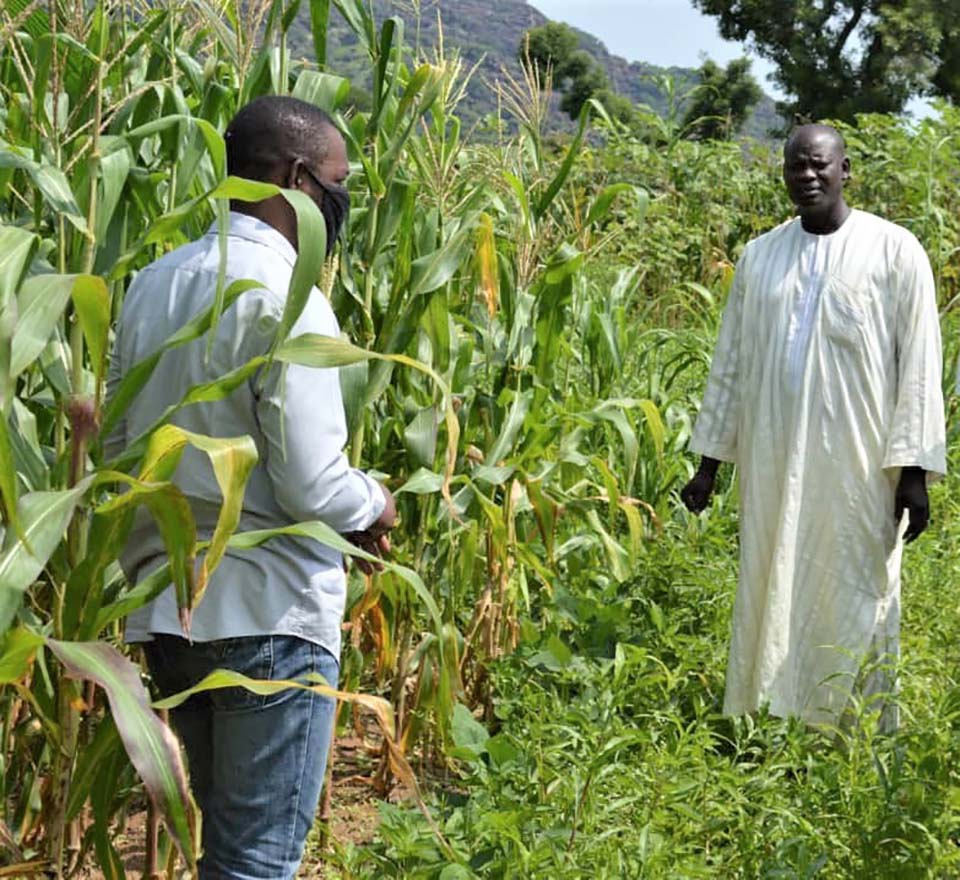 Carlos on his farm with a project service provider.

Photo by Peace Maidawa/DDI for CRS

In the aftermath of the Lake Chad basin crisis, in which violent conflict led to the destruction of homes and infrastructure, displacement and food insecurity, Catholic Relief Services is working to help communities like Uvu recover. Through the Stabilization and Reconciliation in the Lake Chad Region project, or STaR, funded by the German Federal Ministry for Economic Cooperation and Development, families are moving back home to rebuild their lives. One of the ways the project is doing this is by supporting livelihoods regeneration and stimulating functioning markets.

In November 2019 and June 2020, Carlos was one of hundreds of farmers in his community to be trained by CRS on improved agriculture practices. The first training was theoretical. The second included practical sessions using demonstration plots.

“In 2019, I learned how to plant proper spacing for seeds, which is closer than I used to do, and I learned how to apply fertilizer by planting it and not just spraying it,” says Carlos. “The second training showed me how to do the things I learned earlier. That was really how I understood everything.”

The practical sessions took place during the planting season. Farmers were encouraged to replicate their learnings on their own farms. Carlos marked a small portion of his farmland to try out the new practice. He was skeptical. Having just heard of these new techniques for the first time, he says he wanted to be careful.

“The appearance of the demonstration farm during establishment was what motivated me to rush and try the techniques. I wanted to be sure that what was taught us was what was giving them the results”.

On his trial plot of little more than half an acre, Carlos planted corn using the new practices he learned. On the rest of his farmland, he applied his usual practices. At harvest, his trial plot gave him 15.5 bags of corn from the same land size where he says he would typically harvest between 6 or 7 bags of corn with his usual techniques.

Having seen the results, Carlos now looks forward to using his new skills throughout his farm. He says there were also other new practices that he didn’t use on the trial plot, practices like ridging and applying fertilizers a second time, which he also plans to use going forward.

During the trial, Carlos incurred new costs with the purchase of quality seeds but cut down on fertilizer cost. Previously, Carlos used about 165 pounds of fertilizer on the same plot size with his method of sprinkling the fertilizer. But with the new application practice of planting the fertilizer, he used only 99 pounds.

“I’m happy about the training I received and want to teach other people,” Carlos says. “I’m very happy that my farm will improve and that I will experience progress going forward. I have the knowledge now and am looking forward to next season.”

Because of the STaR project, Carlos now has plans to expand his farm size to produce more. He has also taught his two oldest children all he now knows about farming, just like his father did with him.