The megacity of Mumbai pulses with energy. Wealthy businesspeople share city space with the poorest dwellers of the slums. Think Slumdog Millionaire. This is where it was filmed.

A short drive from the cacophony of honking horns and swirling crowds, a teenage girl bends to examine leafy vegetables in a sun-laced garden, brushing an insect off of a short bush sagging with eggplants. As she straightens, she says, "I am a gardener. I'm happiest here, seeing things grow." 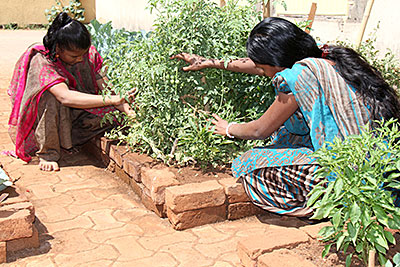 Two girls in India check on the vegetables they tend at CRS partner Prerana's home for girls in need of protection. Photo by Jennifer Hardy/CRS

Anjali* is standing in the garden of a home for girls in need of protection, including those rescued from the sex industry that thrives in the collision between Mumbai's rich and poor communities.

Many would view Anjali only as a victim of the sex trade, failing to see the complex individual behind that part of her story.

But Anjali sees herself as a gardener. And that is how the Catholic Relief Services partner Prerana sees her, too—and not just as a gardener, but as a student, friend and future income-earner for her own family one day, if that's what she chooses. Her history in the sex trade is part of her, but doesn't define her.

At Prerana's home for girls, residents show their individuality in different ways. One girl furrows her brow thoughtfully as she considers how to answer a question. Another leaps in to share her answer with whirling hand motions, excitedly bobbing in her seat.

The girls in Prerana's home are similar to teenage girls anywhere. Priya,* about 17 years old, describes her love of animals and her desire to work in a veterinary clinic. And Bhavika,* in her early teens, describes her biggest regret as not having long, thick hair like one of her friends. "If I could change something, it would be my hair. I would wear it long and make it soft with oil." 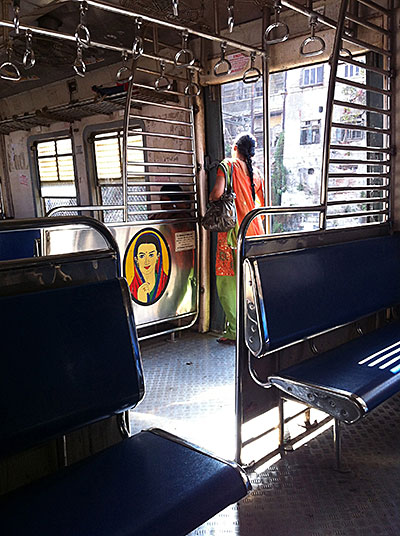 Gender-based violence affects many areas of women's lives in India. In females-only train cars, women can travel without the verbal and physical harassment they face on crowded mixed-gender cars. Photo by Jennifer Hardy/CRS

CRS and our partners address the whole spectrum of protecting people who are vulnerable to trafficking. Those who escape coerced sex work benefit from multifaceted services that help them integrate into society. Girls receive education and vocational training so they can support themselves outside the sex trade.

Stopping sex trafficking is an uphill journey, and staff can only reach so many children through their direct outreach. To multiply those efforts across Mumbai and throughout India, CRS supports Prerana and other partners to train local organizations on best practices in preventing trafficking and helping those rescued from traffickers.

Priti Patkar, an executive director with Prerana, says, "Some of the most important work we do is advocating for the government to enforce existing laws and encouraging additional legislation that will make it less lucrative for traffickers to exploit children."

That big-picture work is vital to turning the tide against criminal exploitation of girls like Anjali, Priya and Bhavika—but not at the expense of forgetting the individuality and humanity of the people who are trafficked. The narrative of shocking crimes and audacious networks that recruit in impoverished villages far from the city is important, but it is only part of the story.

Anjali and her friend Nisha* bring individual faces to the effort to end trafficking as they move from plant to plant in Prerana's garden, pointing out which ones are healthy. They explain how they decided to lay out the different vegetables in the raised beds. Anjali eagerly picks half-ripened cherry tomatoes for visitors, watching anxiously for the verdict on taste. She giggles when told how good they are. She moves on to okra ready for harvest.

*Names have been changed.