In 1905, a Christian missionary docked his boat along the banks of the Nile River in central Africa. He would plant a ficus seed near the riverbank, in what is now the South Sudanese village of Malek. 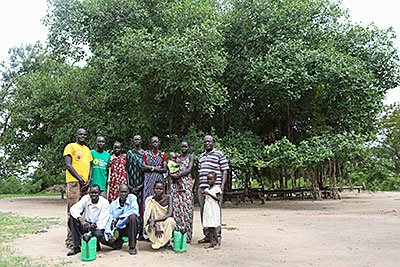 Members of the Tuktiop Farmers' Group stand in front their inspiration: a ficus tree planted by a missionary in 1905. Photo by Sara A. Fajardo/CRS
The seed took root and the tree began to grow, its trunk swelling ever thicker. Branches wove into tendrils that dipped toward the earth to support the heavy canopy of leaves, which eventually grew wide enough to shade every villager from the summer heat. Villagers built benches, and held meetings and church services under its welcoming shade.

More than a century later, that tree has inspired a group of 20 farmers in Malek to start their own tree seedling nursery only a few yards away. "We could see trees," says seedling farmer Martha Adieu, "but we did not know their origin. We didn't know how these seeds could be put down into the ground and grow into a plant." Four decades of war and displacement had robbed the people of their most basic knowledge of farming.

Despite the obstacles, when a team of Catholic Relief Services and government employees arrived with the idea of starting a seedling nursery, villagers like Zakariah Ayen took one look at the ficus and saw what they could accomplish.

"We reflected back on what the missionaries did," Zakariah says. "They created good shade for us. Now we are 20 people. If we plant 20 trees, we will create more shade in the community just like the missionary. The missionary was an example, and now, through this project, we will also be examples and get others to plant trees like this one."

Easing Out of Food Aid 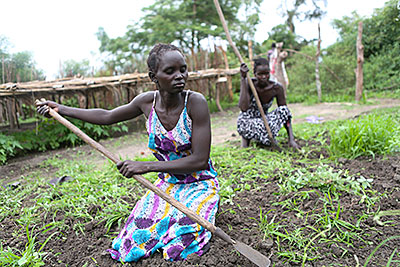 Farmers in the Tuktiop group get ready to transplant tree seedlings. Members have learned that the young plants require time in the nursery's soil before they're ready to sell. Photo by Sara A. Fajardo/CRS
South Sudan's independence on July 9, 2011, gave people the stability necessary to rebuild their lives. The war had taken its toll. For decades, people had hidden in the bush or found refuge in displacement camps. Cramped conditions left little to no room for farming. The main source of food was what aid agencies and foreign governments supplied.

"During the war, everyone sacrificed and people were displaced," says Gabriel Deng Ajak, who directs Jonglei State's Relief and Rehabilitation Commission. "The international community sent relief food and shelter, and people became acquainted with the development syndrome of getting things for free. Now we need behavior change. Time is needed to teach people how to do things for themselves."

In response, CRS, with generous funding from the American people through the U.S. Agency for International Development's Food for Peace program and support from the South Sudanese government, started the Jonglei Food Security program to help the people wean themselves off aid dependence and foster independence by building knowledge, skills and infrastructure. The tree seedling nursery in Malek is one such solution.

Strength in Numbers and Knowledge 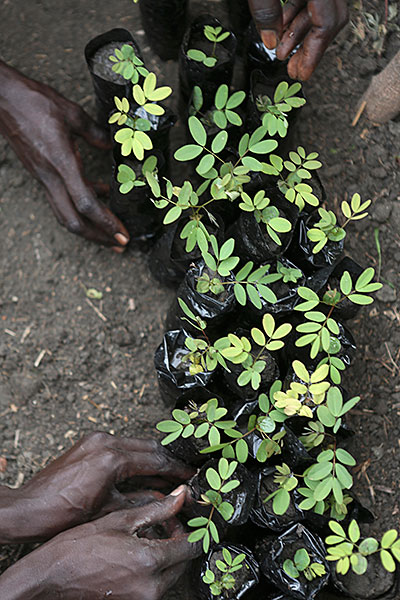 A CRS project is helping South Sudanese farmers relearn skills and gain financial independence through work in a tree seedling nursery. Photo by Sara
Drops of water pelt a woven-reed covering that shades delicate tree seedlings beneath it. Tap, tap, tap. The simulated raindrops filter through the fibers, gently irrigating hundreds of would-be fruit and shade trees. Members of the Tuktiop Farmers' Group ("tuktiop" means "digging") take turns refilling watering cans along the banks of the Nile, only steps from the communal garden. Others till the land, transplant tender seedlings and pack soil into black plastic bags.

During the war, the market was barren of fruits and vegetables. People relied on livestock, what food they could gather and relief agencies. As far back as most can remember, it wasn't safe enough to stay in one place long enough to see a seedling bear fruit.

Although the Tuktiop farmers had heard of guava, papaya and lemon, the fruits they are now planting were something they'd never tasted. Tuktiop members began the nursery with the conviction that it would lead to a better life for them and their community.

The group dynamic is an essential component of the nursery's success. Not only did prolonged years of conflict sever social ties, those years also destroyed access to the most basic knowledge about how to farm. Now, working together, Tuktiop members are helping each other relearn these skills. They also are magnifying their planting efforts and pooling resources to help their seedling business grow.

"In our culture, we work alone," says the Tuktiop group's leader, Zakariah. "Working together, we've realized we produce more as a group. We can produce something that can be taught to many people. We have a saying in Dinka: 'If you have one stick, it is easy to break. But if you have a bundle of sticks, it is hard to break.' That means when you bring a group of people together, you become very strong. It is hard to break a group."

The Tuktiop group is just one of 36 farming groups formed last year through the Jonglei Food Security program. Each group regularly meets with a CRS-trained field extension agent who takes them through the process of moving from subsistence farming to harvesting for market.

Although they work together at the group nursery, the farmers also tend to their own tree at home. A little over a year has passed since each member paid about 45 cents to purchase their own seedling. To help people really value the fruits of their labor, nothing that the Jonglei Food Security program provides is free. People purchase what they need through hard work.

"If we let a tree die," says Martha, "we say you paid 2 South Sudanese pounds [about 45 cents]. That is a loss. We must take care of it, weed, water and fence it in to protect it from roaming animals."

The farmers arrange sticks in the shape of a tepee around the trees to protect them from marauding goats. They mix ashes with soil to prevent pest infestations. As early as next year, farmers who planted papaya trees can expect to harvest their first crop.

By caring for their own trees with guidance from extension agents, Tuktiop members are learning to value their trees and acquiring farming skills they can share. Villagers watching the trees thrive are tempted to purchase their own.

"In the next 10 years, these trees will grow," says Zakariah. "This village will be beautiful, filled with trees. Like the tree planted by the missionary, this will be the place people will visit because of its beauty. We will consume the fruit and look for markets to sell our seedlings and fruits."

Government officials, CRS employees and farmers in Bor County, Jonglei, share their thoughts on the one thing they need to stop hunger.

We seek daily renewal from the source of all life, and so we pray ... END_OF_DOCUMENT_TOKEN_TO_BE_REPLACED

Our walk with God is reflected in our walk with others, and so we pray ... END_OF_DOCUMENT_TOKEN_TO_BE_REPLACED