Improving Lives of Bomb and Mine Survivors in Vietnam

It’s a simple proverb, yet one Le Quynh Nhi repeats most days. 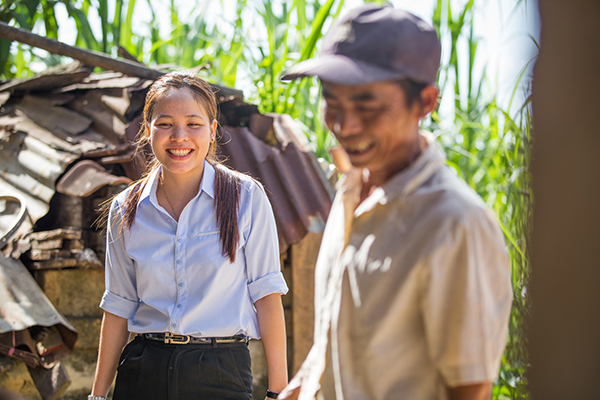 Community worker Le Quynh Nhi meets with one of her 13 clients, Le Huong, at his home in Cam Thanh commune to discuss his needs. Photo by Lisa Murray for CRS

Nhi is a community-based worker supported by a Catholic Relief Services project, funded by the U.S. Department of State’s Office of Weapons Removal and Abatement, that helped survivors of bomb and land mine accidents in Vietnam’s central Quang Binh and Quang Tri provinces. The explosives are a legacy of the Vietnam War.

She has a deeply rewarding and sometimes challenging role.

“I often remind myself that it’s better to teach someone how to fish, so they can live sustainably, rather than simply giving that person fish whenever they are hungry. There is a lesson there,” says Nhi.

She believes the saying reflects the project’s ethos and the optimum way to support survivors and their families as they rebuild shattered lives, overcome disabilities and lead largely self-sufficient existences.

She connected scores of survivors to emergency and ongoing medical treatment, psychosocial support, rehabilitation services and livelihood opportunities during the recently completed 24-month project. And her work continues today too.

“Some people really want direct support. But when I identify needs, it is important to provide the tools so they can help themselves and not [rely on] us,” says Nhi.

Le Huong is one of Nhi’s clients in Cam Thanh commune, home to a cluster of rural households in Quang Tri, one of six central provinces contaminated with land mines. Huong is evidence of how a holistic approach leads to increased self-sufficiency and a better life.

He lives in constant pain due to a head injury and small shards of shrapnel that peppered his body when he triggered a land mine clearing farmland. As the main breadwinner for his three children and elderly mother, he works long hours as a building laborer to make ends meet. His wife, Le Thi Thao, is forced to spend time away from childrearing to sell scrap metal to help the family get by.

“The pain makes it hard, but I must look after everyone,” says Huong.

Nhi quickly identified the need to relieve financial pressure on the family. She helped arrange a loan from the local Women’s Union in January 2017 so the family could purchase two cows. The cows will diversify the family’s income and allow both Huong and Thao to spend more time raising their children. 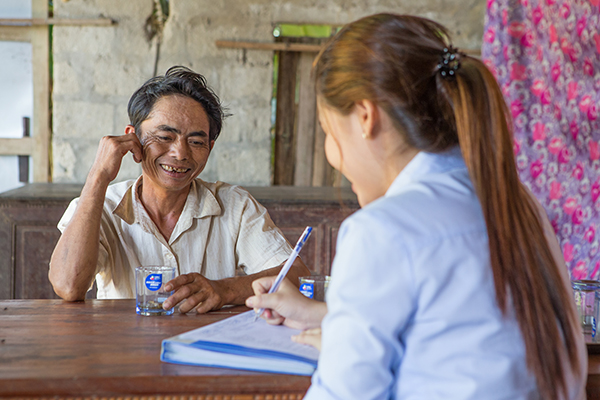 Nhi visits Huong to check up on him and his family, providing vital psychosocial support. Photo by Lisa Murray for CRS

Nhi also regularly visits the family to provide psychosocial support to help them deal with their constant challenges.

“It’s good when she comes and asks questions and talks about work and health. Now I know how to live and support the family better,” says Huong.

Another survivor, Vo Van Binh, lost his right arm and damaged his right leg in an explosion more than 3 decades ago. For years, he struggled to provide for his family until Nhi arranged for a loan from the Korea International Cooperation Agency to buy cattle.

“Nhi encourages him,” says Binh’s wife, Le Thi Hua. “Now he is more positive and wants to be active in the commune.” She says profits from the cattle will help put their youngest child through school.

In supporting Binh, Huong and 11 other survivors and their families, Nhi employs the skills and knowledge gained from 3 CRS-supported training courses.

Nhi, her 6 colleagues in the commune, and 242 other community workers supported by the project all learned case management and rehabilitation skills. They are now better equipped to support people with disabilities and share their expertise with family members, ensuring progress achieved by the project is sustainable.

“In the training, we learned how to move people with physical disabilities from one place to another, how to take care of them at home and how to reduce their pain.

I can now better understand the needs of the survivors and their families. I don’t just refer [them to service providers]. I can now help in many different areas with advice and support,” says Thi.

Nhi and her colleagues report to a commune coordination committee—1 of 93 established by CRS—which oversees the delivery of care and referrals to service providers. Providers include the Red Cross, Korea International Cooperation Agency and the local Women’s Union—an important sociopolitical organization in Vietnam with a broad grassroots network.

Within Cam Thanh’s committee, Tran Thien has witnessed first-hand how the project delivered an improved quality of life for people in need. 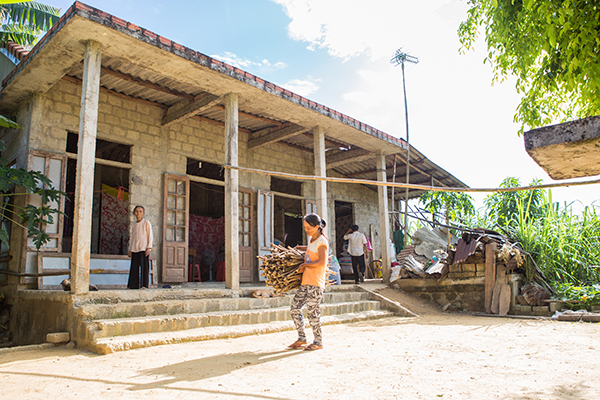 Huong’s wife, Le Thi Thao, does morning chores at home, working hard to provide for the family. Photo by Lisa Murray for CRS

“Instead of viewing someone as extremely poor, we can now recognize disabilities as a [root] cause and take the right action,” says Thien, who is a committee member and employee of Vietnam’s Department of Labor, Invalids and Social Affairs at the commune level. The department is part of the broader national-level ministry responsible for social and employment issues.

Apart from strengthening relationships with service providers and viewing people’s needs holistically to connect them with medical care, health insurance and livelihood options, the committee plays a key role in helping survivors and their families cope with severe floods, which hit the province in September 2016.

“The project has ended, but we still have connections between the CBWs and the beneficiaries to provide support when possible. They now have a voice they didn’t have before,” Thien says.

In addition to the 236 survivors who received in-depth medical examinations and treatments, 242 community workers and 2,060 family members of survivors are now better able to perform home-based care and basic rehabilitation techniques, and provide psychosocial support. They had helped 3,219 survivors by the project’s completion in April 2017.

Nhi and Thien both agree there is potential for CRS to continue its life-changing work in communes like Cam Thanh to help survivors with disabilities and their families break the cycle of adversity.

“We achieved a lot, but there is still work to do. There is always demand, and some people will also face challenges in the future. They need support,” says Nhi.

Thien says a second phase of the project would also allow his commune and others to build relationships with more service providers.

“We want to expand our connections with other providers so we can deliver more wide-ranging support. Many have been helped already, but others are still in need,” says Thien.

Going forward, the project’s low-cost and low-input approach to improve coordination among service providers to develop referral mechanisms and relationships that help ensure sustainability have been warmly acknowledged by local authorities, who now have greater awareness and a heightened receptivity to similar projects.

As a catalyst for change, the project has opened the door for CRS to continue its work in the region helping communities become self-sufficient and improving survivors’ quality of life.

August recess is a key moment to meet with your members of Congress while they are out of session... END_OF_DOCUMENT_TOKEN_TO_BE_REPLACED

Use this calendar for key dates to reflect and take action with your community to address climate... END_OF_DOCUMENT_TOKEN_TO_BE_REPLACED