Le Thi Phuoc can recall the sheer terror of losing her roof when a fierce storm lashed her small village in central Vietnam. 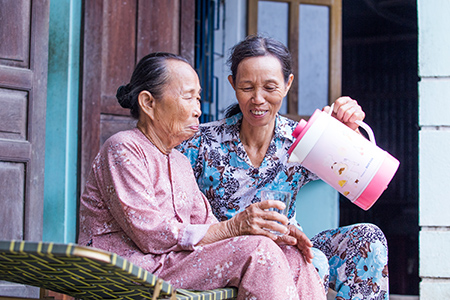 Le Thi Phuoc and her elderly mother can now sleep well at night, knowing their home’s new roof can stand up to the fierce storms that lash their small village in central Vietnam. Photo by Lisa Murray for CRS

“I was so afraid because the house was shaking, I ran to the neighbors to take shelter. When I was a child, I wasn’t scared of storms. But now they terrify me,” says the 62-year-old woman, who shares a small house with her 84-year-old mother in the coastal Quang Nam province.

This wasn’t the first time the pair had fallen victim to the increasingly destructive storms that now pound this province.

With Vietnam considered extremely vulnerable to climate change, severe weather has become a reality that increasingly endangers lives and threatens livelihoods and assets of the most vulnerable in many coastline communities.

Recognizing these growing threats, Catholic Relief Services took action in seven disaster-prone communities in the coastal area by implementing the project. The project raises awareness of disaster risk reduction, and engages households to develop and implement personalized plans to enhance their resilience to natural hazards. 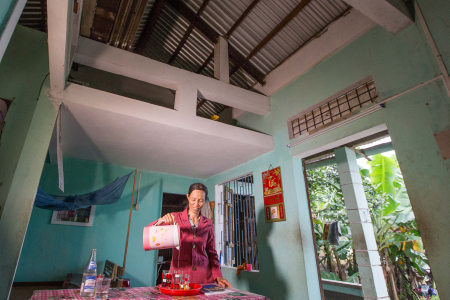 Phuoc and her 84-year-old mother now have an improved quality of life thanks to a fortified mezzanine section of their home they share in the coastal Quang Nam province. Photo by Lisa Murray for CRS

The 18-month project adopts a participatory approach—with communities taking the lead in identifying needs and solutions, safeguarding rural livelihoods and fortifying shelters as well as disaster preparedness and responses.

For Phuoc, this process resulted in other villagers nominating hers as one of six households most in need of project support. 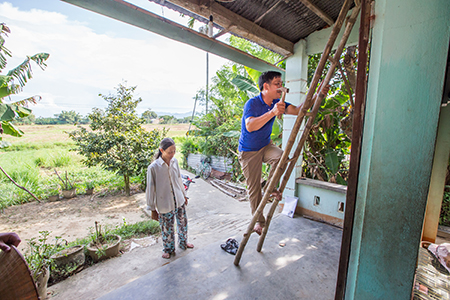 “During our village meeting, we discussed each other’s problems and my house was identified as most vulnerable to storms and floods. It was a fair way to do it [select beneficiaries],” says Phuoc, who along with her mother, struggles with mobility.

Her district’s support group, led by Le Van Thuong—head of the local farmer’s union—used a CRS manual to guide her through the process of selecting the most cost-effective materials and resilient shelter techniques to strengthen her roof.

“Me and mom sleep well and feel safe now, despite many storms coming here. This is [especially] a relief for my mother, as evacuating was a burden because of her age,” says Phuoc, who said previous roof repairs would often force her into debt. 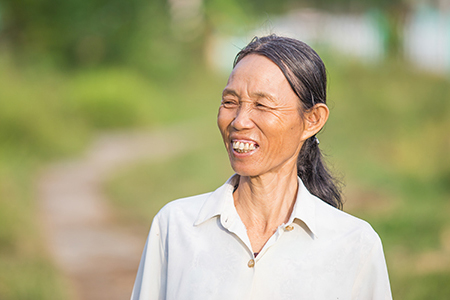 Phuoc is now more confident her household is prepared for severe storms. Photo by Lisa Murray for CRS

Tran Thi Dung was another to benefit from this inclusive project. The 65-year-old had lost her roof to severe storms three times in recent years and said making her voice heard in finding a solution was important.

“My house is in a field so I have no trees and other houses to prevent the strong winds. The support group and a stonemason visited, they listened and we discussed the right solution for me,” says Dung, who joined CRS and her district in contributing to the $600 cost of replacing her roof.

Thuong and his team look back with a sense of pride knowing that vulnerable members of the community such as Phuoc and Dung can now rest easier at night and have greater resilience to severe weather. 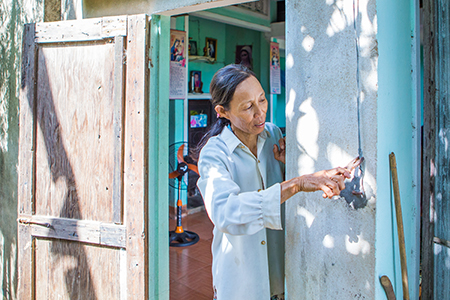 Phuoc applies some of the home maintenance skills she learned to ensure her household is storm resilient. Photo by Lisa Murray for CRS

“One of the best moments of my work is when we support the most vulnerable people like Phuoc. You see her house, at the beginning it wasn’t in a safe condition and after disasters hit it was almost destroyed,” says Thuong. As a rice farmer living in the community, he is also on hand to provide informal support to project beneficiaries, including those trained to safeguard rural livelihoods through water conservation, composting and other techniques.

They are some of the 3,511 direct and 54,464 indirect beneficiaries supported by the project to respond to the growing challenges of climate change, with 2,930 local people helping to develop 47 community-tailored plans implemented at village level.