photo by Marie Arago for CRS

Bernadette Moses doesn’t know where her roof is.

A rusty sheet of zinc lays in her yard, crumpled into the shape of a ‘w.’ But it is not her roof. Hurricane Matthew swept hers away, along with her chickens and the front porch.

“This is worse than anything we have ever seen. The rain is not a problem for us—

we have been through storms before—it’s the wind that killed us,” she says.

Hurricane Matthew pounded villages along the Tiburon peninsula in coastal southwest Haiti last week. Torrential downpours and 145 mph winds felled trees, swept away people and animals, and destroyed up to 90% of homes in some areas.

All told, 2.1 million people were affected and 1.4 million need immediate help. Food stocks and crops were destroyed, a critical loss for the entire country because the area is a key producer of Haiti’s food supply. Clean water is in short supply and poor sanitation threatens to trigger another outbreak of cholera, a disease that has killed some 10,000 since the 2010 earthquake. Already, new cases are spiking.

'As bad as the earthquake'

“For these communities along the country’s western edge, this is as bad as the earthquake,” said Chris Bessey, CRS country representative in Haiti. “Entire communities have lost not just their houses but their livelihoods, their schools, their churches and their already-limited health services. They have to start over from zero.”

Salvatore Enzo Del Brocco, a priest from Dame-Marie in the extreme southwest,  told CRS the aftermath “looked like a machete just passed through the air at 200 miles per hour and chopped off everything.”

Afraid her house would collapse, Bernadette rode out half the storm standing in a field about 350 feet away. She was unharmed, as were her loved ones. In that singular way she is fortunate.

But the storm turned her little neighborhood of two-room, concrete-block houses in the popular beach town of Port Salut into a pile of rubble. At least 13 people had died during the storm.

When CRS visited the community this weekend, people picked through the rubble and made piles of mangled roofs and fallen trees.

Still in shock, residents said they could not believe how the hurricane, which many of them said they didn’t even know was coming, could take everything they had so quickly. Most had no food in what was left of their houses. Much of the fruit from fallen trees was gone. They said they did not know where their next meal would come from. 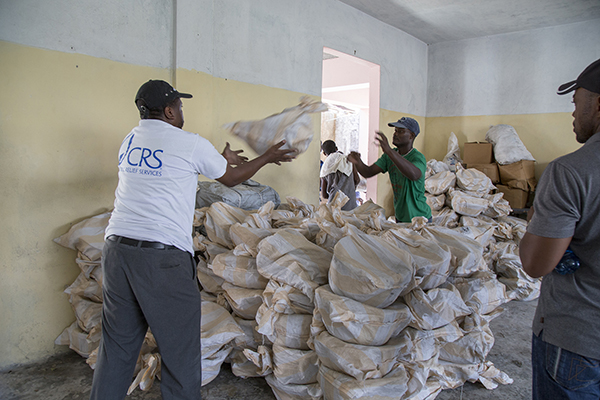 At the Catholic church in Port Salut, Haiti CRS employees load up a church dispensary with supplies for distribution to survivirs of Hurricane Matthew. Photo by Marie Arago for CRS

CRS is bringing food, blankets and other emergency supplies to those communities as we gear up to help people like Bernadette repair their houses and rebuild their lives. We are setting up operations in Jeremie and Dame-Marie, hard-hit areas left unreachable for days after the storm. CRS emergency experts, arriving from around the world are designing projects to help people get clean water and avoid contracting cholera.

Agriculture teams are working with farmers whose crops were completely destroyed so they can replant in time for harvest in December, when a food shortage could set in.

“Everybody should be concerned for December, when the main summer crops will be harvested,” said Ludger Jean Simon, a CRS agricultural expert. “Farmers need to replant now but they have competing priorities, as many need to fix their houses.”

Days after the storm passed, giving way again to blue skies and pink sunsets, school books and clothes dried in the Caribbean sun. Mattresses were propped against walls to air out. Residents climbed their walls to fasten the metal roofs the storm had violently ripped away from so many homes like Bernadette’s. And the air filled with the clanking of hammers, signs that, amid desperation, work to rebuild homes had already begun.

August recess is a key moment to meet with your members of Congress while they are out of session... END_OF_DOCUMENT_TOKEN_TO_BE_REPLACED

Use this calendar for key dates to reflect and take action with your community to address climate... END_OF_DOCUMENT_TOKEN_TO_BE_REPLACED