Mahdi, a short-haired boy with an infectious smile is 5 years old. This year, he has repeatedly started asking his mother Sabira for more food. They sit in their small one-room house in the Central Afghan highlands every night, a bowl of plain rice in front of them, and several cups of tea. For Mahdi and his siblings, this just isn’t sufficient. 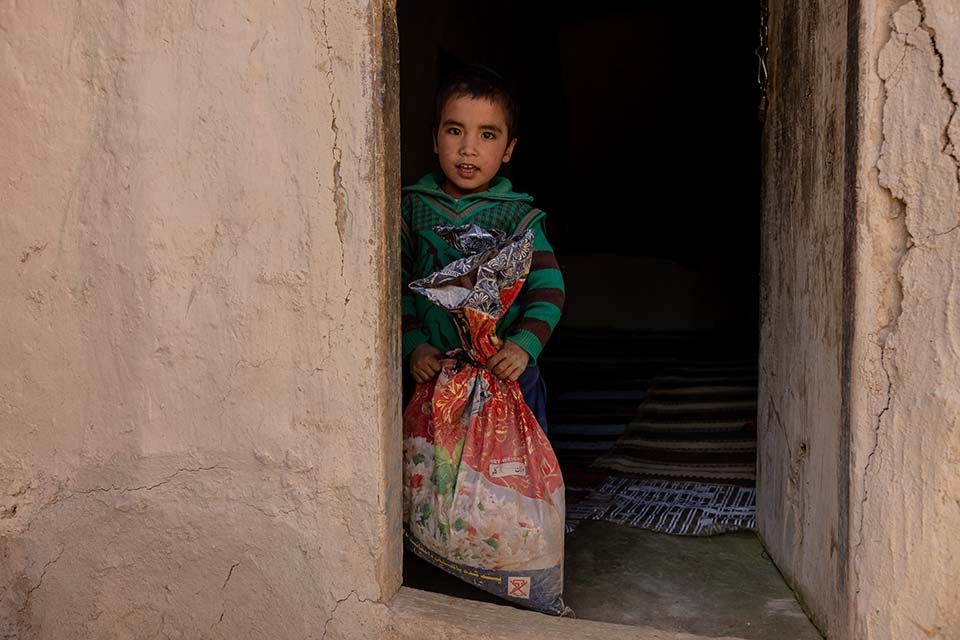 Mahdi, 5, holds a sack of rice—essentially what his family now relies on. The northern highlands of Afghanistan have been severely affected by drought and climate change. CRS has been distributing cash here.

“We don’t have enough,” Sabira admitted, her eyes filling with tears. “The war never came here. It was always peaceful here. But it’s always been hunger,” she said. “This year is the worst we’ve ever seen. I have six children and all of them are crying for food.”

Afghanistan has faced increasingly severe droughts. Snow and rainfall patterns have decreased due to climate change, and temperatures have steadily been on the rise. Many Afghans living in affected rural communities now say they can’t even afford food for their children anymore. Hunger and malnutrition are widespread, and the effects of climate change will likely put millions more at risk in the future.

In the village where Mahdi lives with his family, drought isn’t immediately visible to the eye.

“That’s because there’s a little bit of water left,” his father Hussain Ali says. Earlier in the year, villagers used snowmelt to irrigate their crops. There were a few spring rains, and there are several deep wells—even though groundwater is depleting quickly in all of them. Several crops like potatoes and barley are growing, and several trees appear to be blooming. 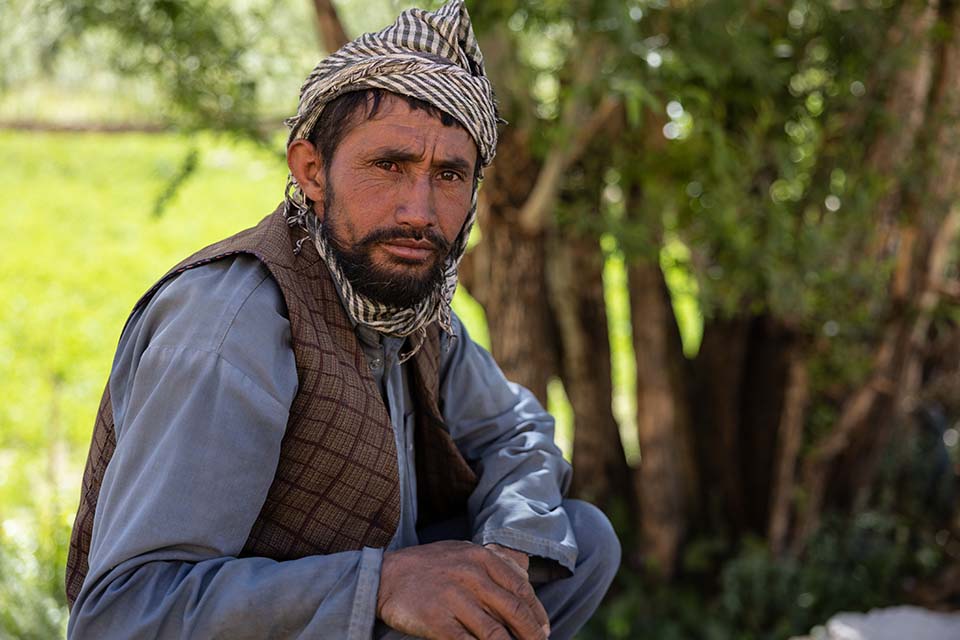 Hussain Ali  was a soldier before becoming a farmer. But without water there is little to no farming work. Climate change and drought have slowly been creeping in and villagers say they have no crops left.

“What’s happening is that we planted seeds in spring. In previous years, we had up to three annual harvests. This year, we will be harvesting early, and only once: there’s not enough water to let the crops fully grow. This means smaller potatoes or tomatoes for example. The harvest won’t last long,” Ali says, pointing to an apple tree. “It’s blooming, but it’s almost August,” he explained. “This tree should be bearing fruit, but there is none. We don’t have enough water to harvest apples this year.”

Ali says that the drought has been creeping in slowly. For the past ten years, villagers noticed water shortages. It’s grown worse over the last three years.

“It’s tough for all of us, but the most difficult part is watching our children go hungry,” he says.

“I’ve been borrowing money from local shopkeepers to pay for our food expenses, but it’s still not enough. I buy the lowest quality rice and flour, and it’s still too expensive,” Ali says, pointing to two plastic sacks on the floor, half filled with what he bought for his family recently.

Hussain Ali shows what the food the family now has--essentially just rice. The northern highlands of Afghanistan have been severely affected by drought and climate change. CRS has started distributing cash here.

The family used to spend $135 a month on food before last year’s regime change; this year they are spending an additional $35, which Ali simply can’t afford. He’s been working as a farmer and  laborer, and has even rented out the small plot of land the family owns. “Every bit of money goes towards paying off my debt, but I keep accumulating more.”

Families throughout Afghanistan have similar struggles. To address the impact of the drought, CRS is supporting communities to cover the costs of planting and tending livestock. CRS has recently distributed wheat seed to 2,555 families that could not purchase quality seed locally. CRS is also working in 40 communities to help themr access clean drinking water by building gravity-fed water systems and solar-powered wells. Given that this year’s harvest in August through October is also expected to be below average for many areas farming communities, CRS is planning summer and fall activities to create additional opportunities for work and income.

Ali has been receiving some help. CRS provided cash assistance, distributed seeds and fertilizer. A new irrigation canal was built for the village—the few potatoes and tomatoes growing are alive because of it.

Ali says he’s thankful but added that he had a message to share with the world: “Our climate is changing and once the water is gone, no one can bring it back.”

August recess is a key moment to meet with your members of Congress while they are out of session... END_OF_DOCUMENT_TOKEN_TO_BE_REPLACED

Use this calendar for key dates to reflect and take action with your community to address climate... END_OF_DOCUMENT_TOKEN_TO_BE_REPLACED