Mary Atieno Onyango often takes a slight detour on her way home. She walks along the rock quarry and past several cornfields in search of Fleria Chuka's familiar stooped figure crying on her front step. 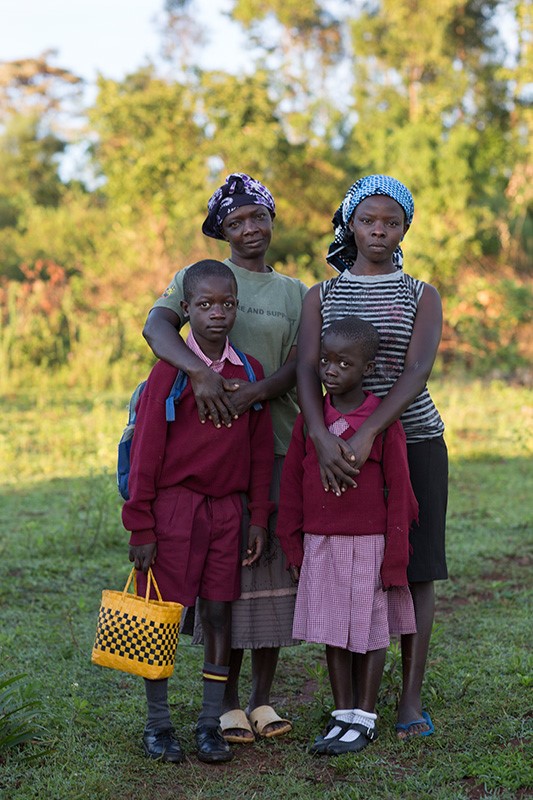 Mary Atieno Onyango, top left, lives a full life with her children, thanks to the support CRS provided after she tested positive for HIV. She now helps people living with the virus rebuild their lives. Photo by Sara A. Fajardo/CRS

Fleria lives in a western Kenyan village where an estimated 25% of the population lives with HIV. She lost four of her five sons to the AIDS epidemic. When the last one died, her grandson, Evans, came to live with her. Together the two work the land and live hand-to-mouth, struggling to pay school fees and afford more than their usual one meal a day. When she has time to stop and think, she gives in to sadness, often pulling wallet-sized photos from the safety of a plastic bag, staring at the faces of her sons and weeping.

As a volunteer community health worker, Mary is all too familiar with stories like Fleria's. Trained by The Children Behind project, sponsored by Catholic Relief Services, Mary helps more than 100 families in her village with everything from connecting to social services and medical care to learning how to plant a kitchen garden or join a savings-based microfinance group. In Fleria's case, however, Mary recognizes that she can help most by simply sitting beside her friend and helping her work through the grief. Mary understands because she too was once gripped by severe depression.

HIV positive and 'no dreams left' 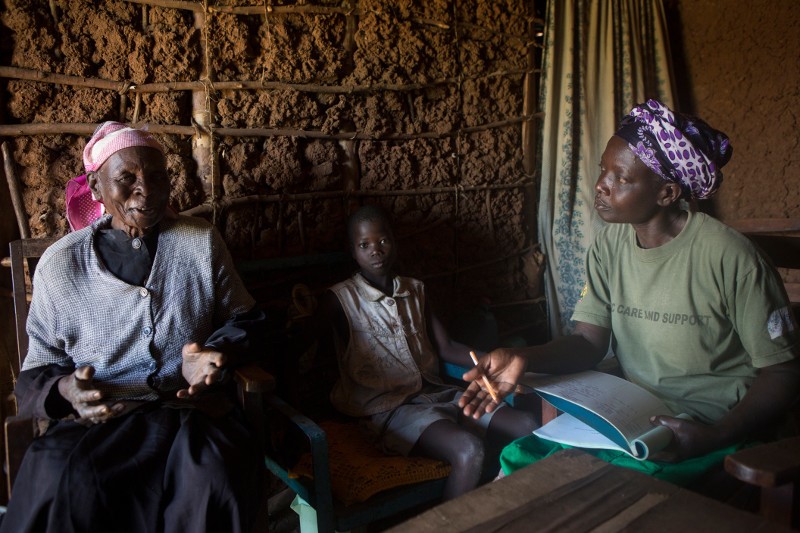 Fleria Chuka, left, cares for her grandson, Evans, orphaned by the AIDS epidemic in Africa. She welcomes the counsel and friendship of CRS volunteer health worker Mary Atieno Onyango. Fleria lost four of her five sons to AIDS. Photo by Sara A. Fajardo/CRS
It was 2007 and 2 days before Mary gave birth to her youngest child. She was so frail that her brother-in-law had to take her by bicycle to the community "baraza," or meeting, that the community chief convened to introduce the TCB project. The project helps families struggling with HIV and other challenges that leave children susceptible to hunger and poverty.

Mary had been wasting away and was deathly thin despite her growing belly. She could no longer walk or work. She worried about what would become of Evelyn, Quinter and Solomon, her three older children. "At that time I was just thinking to die because I had no alternatives," Mary says. "I had no dreams left."

During a routine prenatal checkup Mary had discovered that she was HIV positive. Her CD4 counts, a measure of the body's ability to fight infection, were a dangerous 34, rather than the 500 to 1,000 expected in a healthy person. But she refused to seek help because of the stigma attached to being HIV positive.

"When people [would] hear you have HIV, they would call you 'HIV,'" Mary says. "You [were] looked at as someone who does not belong to the community. People would look at you like they were waiting for your death."

'I realized I can be alive'

A community health worker from the TCB project began to visit Mary regularly and encouraged her to seek help and begin a regimen of antiretroviral therapy.

"He told me … 'When you go (to the clinic) you will be given drugs and you will survive and be strong enough to watch your children grow. They will survive under you until the day God plans for you to die,'" Mary says.

Gradually Mary began to let go of her fears and trust her community health worker. "Through the counseling I realized I can be alive," says Mary. "I can take drugs and be alive, and whatever a man says about me I can let go of and take the drugs and survive with my children." With her hope reignited, she started taking her antiretrovirals and educating herself on what it is like to live with HIV. The TCB project helped her re-enroll her daughters in school, provided food, and later—when Mary was strong enough—taught her how to plant a nourishing kitchen garden. The project also helped her join a savings-based microfinance group so she could save and borrow money for household needs and business endeavors.

Everything in Mary's house is tidy and clean. Her kitchen garden bursts with vitamin-rich kale, tomatoes and local greens. A hand-washing station sits outside of the family's latrine. And she had solar lights installed in her home so her children can study at night without using dangerous kerosene lamps. Mary does everything thoughtfully and with purpose.

With her health restored, Mary has become an evangelist of sorts. She is committed to letting others know that she is HIV-positive.

"To disclose my status is to tell people the reality [of living with HIV]," Mary says. "For a long time people believed you could not live long with a positive status. When you talk about your status they can think, 'It is not only me. If she can manage to live with HIV, why can't I?' It gives them encouragement." Seven years after accepting her status, Mary knows that she is an example for her community.

When Mary's community health worker began dedicating himself to serving others through microfinance programs, the village asked Mary to step in and take over the health worker role.

"Initially I did not want to become a health worker because I have two young children. They need me," says Mary. "But the community insisted. I saw where I came from and I wanted to assist the community as I was assisted. I asked God to give me the power to talk to the people." She now uses that power to counsel others and to help families find inspiration and solace through her example. 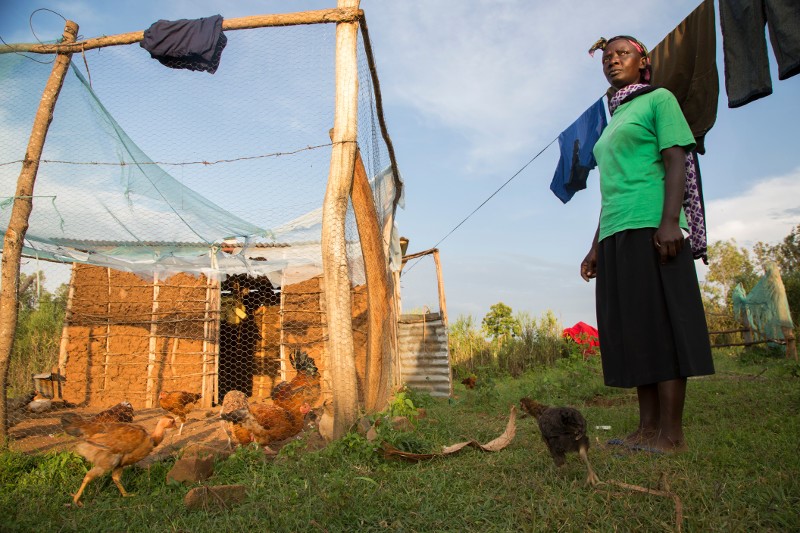 Mary Atieno Onyango has demonstrated to her community in western Kenya that life is still worth living after an HIV diagnosis. Photo by Sara A. Fajardo/CRS
Mary can't walk through her village without being greeted by someone she's helped. There's the mother living with HIV that Mary accompanied to prenatal appointments and to the birthing room, so her child would get medication to be born free of the virus; the grandfather she taught how to grow a kitchen garden; and the aunt caring for orphaned nieces. The aunt purchased her first cow after Mary introduced her to the local Savings and Internal Lending Communities, or SILCs.

Throughout western Kenya, CRS-trained community health workers like Mary are helping more than 13,000 vulnerable children and their caregivers. Although 20 families were assigned to Mary through CRS, so many others recognized her skills that she ended up adding another 80 people to her roster.

Taking the long way to help

Mary visits these families an average of three times a month, often taking the long way home so she can check in on Fleria and Evans. She has a soft spot for the elderly grandmother, recognizing her former self in Fleria's grief. Sometimes Mary helps Fleria weed her garden; other times they simply chat on Fleria's front step.

"Mary has empathized with me," says Fleria. "I'm so grateful for the kind of heart she has. She has done me so much good because she has not left me to be desperate. When she comes, she counsels me. What Mary has done for me, my own family has not done."

We seek daily renewal from the source of all life, and so we pray ... END_OF_DOCUMENT_TOKEN_TO_BE_REPLACED

Our walk with God is reflected in our walk with others, and so we pray ... END_OF_DOCUMENT_TOKEN_TO_BE_REPLACED