First, AIDS took Ntsoaki Macheli’s mother. Then it killed her five siblings. So, when she was diagnosed with HIV a decade ago, she knew what that could mean. She also knew that protecting her children from the infection would become her life’s work.

“I don’t want my children to suffer,” Ntsoaki says. “They deserve a brighter future.” 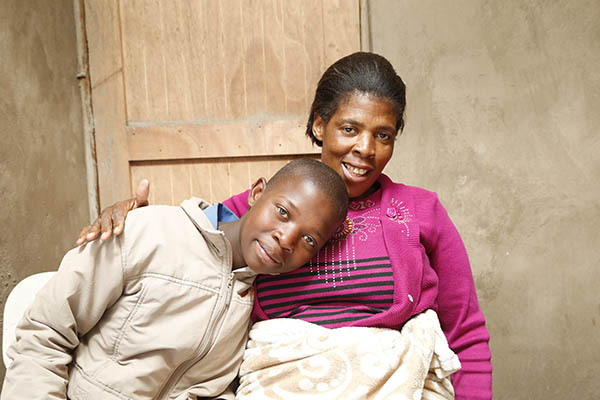 With the help of Catholic Relief Services, Ntsoaki Macheli, an HIV-positive single mother in Lesotho, is learning how to talk to her 13-year-old daughter, Malijeng Macheli, about the disease.  Photo by Nancy McNally/CRS

Through DREAMS, an HIV-prevention initiative, Catholic Relief Services is giving the 43-year-old mother hope that her children can remain HIV free.

DREAMS stands for Determined, Resilient, Empowered, Aids-Free, Mentored and Safe, and it focuses on adolescent girls and young women, because they are the most at risk for new infection, as in general, infection rates across sub-Saharan Africa have declined.

Ntsoaki is especially concerned about her daughter, Malijeng. At 13, she is in the high-risk demographic.

“I used to fear talking to my children about HIV,” Ntsoaki says. “But as I attended the DREAMS trainings, it became easier for me to speak to them about it.”

And talking about HIV is a crucial step to avoiding the virus in Lesotho, where 25% of people already have it.

Many mothers were just girls themselves when they had their children. But Basotho culture is traditional, conservative and reserved. People don’t easily open up to talk about their feelings. And AIDS has also left a generation gap that can interfere with communication. In many cases, grandparents are raising children.

“Establishing a positive relationship with a parent or caregiver based on trust and open communication can help reduce a girl’s risk [of] contracting HIV,” says CRS Lesotho country representative Erica Dahl-Bredine.

The program also helps families deal with stress and their emotional reactions to it. Ntsoaki says that in the past, when she would come home from work late in the evening, she’d shout at the kids because she was so tired and frustrated. In fact, it was Ntsoaki’s daughter who encouraged her to participate in DREAMS, “because they were talking about these important issues,” Malijeng says.

Malijeng is happy that her household is calmer now. And if boys on the street harass her, she can talk to her mother about it. Before DREAMS, she didn’t feel she could confide in her mother. Malijeng reciprocates by preparing meals when her mother has to work late. There is harmony in the family that wasn’t there before.

“In Lesotho, a girl cannot talk to a parent about what she is feeling or her challenges, but after taking part in DREAMS, parents will say the girls come to them now,” says Molarisi Mehale, CRS technical director for HIV-related programming in Lesotho.

CRS is one of several organizations participating in DREAMS in Lesotho. Part of CRS’ larger 4Children program that focuses on orphans and other vulnerable children, DREAMS activities include promoting financial savings groups and education, life-skills training, internships, job training and support, and family counseling.

Since joining DREAMS in Lesotho in 2016, CRS has reached more than 60,000 adolescent girls, young women and caregivers. But even with support, life continues to be an uphill battle for many vulnerable families.

Ntsoaki makes a living selling fried dough out of a shack by a bus stop in Semonkong, the rugged, mountainous community where she was born. As a single mother, Ntsoaki worries about what would happen to her children without her.

When she learned she was HIV-positive, Ntsoaki says, “I was scared of dying and leaving my children, since I don’t have anyone else to rely on. I figured, ‘Wow, what am I going to do? My kids, what are they going to do?’”

Thankfully, Ntsoaki’s worst fears have not come true because antiretroviral drugs are provided through the President’s Emergency Plan for AIDS Relief.

And the DREAMS initiative has taught her precautions to take when cutting her children’s hair and preparing their food, to prevent transmitting the virus. In addition, through DREAMS, Ntsoaki participated in a savings and loan group that helped her save enough money to build a house.

“I first got involved with the lending and savings group because I had a dream of one day building a house for my family,” she says. “I have reached that goal.”

As for the future, Ntsoaki hopes for a cultural shift in how women are treated in her country.

“I wish for tougher measures against rich older men,” she says. “They tend to take advantage of the kids without parents. At the same time, [the children’s] own lives can be cut short.”

The overall aim of DREAMS in Lesotho is to decrease new HIV infections by 40% nationwide, which is a big challenge for a country with the highest rate of new infections in the world, and the second highest prevalence of HIV globally.

“The numbers are shocking, no question. But the good thing is that the prevalence rate is staying high because more people who are HIV-positive are on treatment and they are staying alive. And we need to celebrate that,” Dahl-Bredine says. “What we need to focus on now is curbing new infections, especially among girls and young women.”

All CRS programming and partnerships strictly adhere to Catholic teaching, including our HIV prevention activities as part of the DREAMS program.

Help Where It’s Needed Most

We seek daily renewal from the source of all life, and so we pray ... END_OF_DOCUMENT_TOKEN_TO_BE_REPLACED

Our walk with God is reflected in our walk with others, and so we pray ... END_OF_DOCUMENT_TOKEN_TO_BE_REPLACED