Historic Climate Accord Reached in Paris

On Saturday, December 12, negotiators from 196 countries emerged with an historic accord to stem emissions and set the world on a more sustainable environmental path. 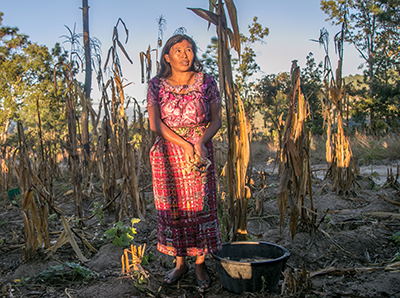 A woman stands amid crops withered by drought in the “dry corridor” of Guatemala. Photo by Philip Laubner/CRS
In the run-up to the Paris climate talks, lessons learned from past negotiations were painstakingly applied.  As the world prepared for the 21st Conference of the Parties, or COP21, diplomats achieved a few key wins: the submission of national plans to reduce emissions, pledges to financially support developing country needs and bilateral negotiations to reduce stumbling blocks at the global conference itself.

Most notably, the United States and China—two holdouts in previous agreements—engaged in fruitful talks leading to a bilateral accord.

The groundwork laid by national decision-makers and U.N. diplomats was not the only factor buoying negotiators through long, and sometimes tense, discussions. People from around the world demonstrated, marched and appealed to leaders to take action. Inside the Paris Le Bourget Conference Center, concerned citizens, scientific and environmental groups, nongovernmental organizations, mayors from around the world and even private companies held hundreds of events on the sidelines.

With inspiring energy, 50,000 global citizens converged on the conference center. Faith groups, including Catholic Relief Services, gathered daily for worship and song, celebrating the richness and beauty of our planet, and praying for the ultimate success of negotiators.

On Saturday, prayers and expectations were answered, and negotiators achieved an historic agreement. The official goal is to maintain a temperature rise below 2°C, and the accord aspires to go even lower. As agreed-upon targets will not yet achieve that goal, negotiators have committed to meet every 5 years to further reduce emissions targets and, importantly, report on progress in meeting them. The agreement also references the significant financial support promised to developing countries to help people adapt and cope with climate change, and governments reduce emissions.

The climate agreement is a victory worth celebrating. But what’s next? In fact, the toughest road lies ahead as we seek continued prosperity—one which is more inclusive of the poor and vulnerable, and more sustainable for our planet. In Laudato Si’, Pope Francis reminds us that the future of humanity and nature are inextricably interwoven. Caring for God’s creation is an expression of our love of God and our moral responsibility to ensure that future generations can enjoy the fruits of the earth. In our work overseas, CRS supports extremely vulnerable communities on the frontlines of climate change to better cope with its sometimes devastating effects. But the challenge is enormous.

Now that the agreement has been achieved, we need you more than ever. Some in Congress may try to block the implementation of this groundbreaking agreement. Blocking action would be devastating for people and the planet. Financial support for poor countries and their vulnerable citizens also remains at stake. The United States has pledged additional funds to support the adaptation and mitigation needs of developing countries, but these funds require approval by Congress. Please write to your representatives in Washington, DC, and let them know that you care about these issues. The future of our planet depends on our mutual actions. Click here to find out how you can contribute to ensuring that the promises made in Paris become a reality here at home.

Pray and reflect with your community on our call to respond to the needs of our sisters and... END_OF_DOCUMENT_TOKEN_TO_BE_REPLACED

Reflect on the impact climate change has had on our planet and pray for the Holy Spirit to change... END_OF_DOCUMENT_TOKEN_TO_BE_REPLACED