It started like a fairytale. *Charity, 15, was on a bus heading home from the market. She and the driver, who smiled at her when she got on, struck up a conversation. He told her his name was David and talked to her for most of her trip. When they got to her stop, only a few people were left on the bus. David begged Charity to go on a date with him. He said he wouldn’t let her off until she agreed. Charmed by his persistence, the other passengers encouraged her to accept his invitation. She did. David was 23 at the time. He and Charity quickly became an item. Often, she would ride his bus to spend time with him while he worked.

A few weeks after Charity and David started dating, the couple went out with his friend Andrew. At some point, David left Andrew and Charity alone and Andrew raped her.

In Zimbabwe, more than one in four women have experienced sexual violence and that number is growing. Crime data from the Zimbabwe National Statistics show a 74% jump in rape cases between 2010 and 2018. The Zimbabwe Gender Commission chairperson, Margaret Sangarwe, estimates that 22 women are raped daily.

As in many countries—including the United States—rape is largely under-reported due to social stigma and fear of retaliation. Victims are not believed and often blamed for causing the attack. As a result, many women cope alone and in silence with the emotional and physical effects of their trauma. 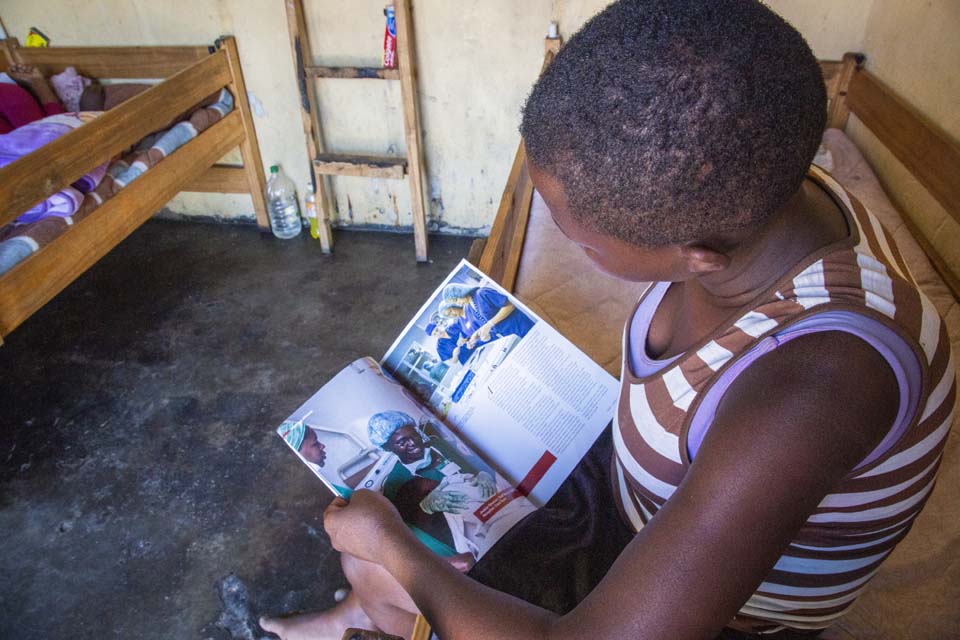 Charity reads a magazine about childbirth and healthcare. Even though she is only 15 years old, she has every expectant mother’s fears about her baby.

Charity was afraid to tell anyone she had been raped. When she confided in David, he attacked her and accused her of lying. She feared that even her family would blame her. She struggled with depression and apathy until she confirmed she was pregnant. That’s when she made the decision to tell her family.

“It was almost a relief to talk about it finally,” says Charity. “Many people said so many bad things about me, but it was no worse than what I thought about myself.”

Charity’s aunt brought her to a shelter for survivors of gender-based violence in Mazowe, Zimbabwe. The shelter is run by the Musasa Project—a CRS partner who provides counseling, medical care and legal support to women who’ve experienced violence. With funding from the USAID PEPFAR program, CRS supports Musasa and other partners through its Pathways project, which helps survivors of abuse transition back into society.

When women and girls arrive at the Musasa shelter, they are taken to hospitals for medical care, receive psychological counseling, and legal services. There are women in their 60s and girls as young as ten in the shelter. Each one has suffered or has been affected by some form of gender-based violence.

Charity is now almost seven months pregnant and has been living in the shelter for the past two months. Lawyers from Musasa helped her report the rape to the police and are representing her in an on-going court case against Andrew. Shelter staff ensure that Charity gets medical care, including prenatal care, as she progresses through her pregnancy.

Throughout the United States there are non-profit organizations—many of which also offer shelter—dedicated to supporting people as they leave violent relationships or seek help after a sexual assault. Those community centers are a lifeline for survivors, especially women and their children. In Zimbabwe, Musasa is one of only a few organizations providing similar services. Musasa currently runs three shelters under the Pathways project in Zimbabwe. 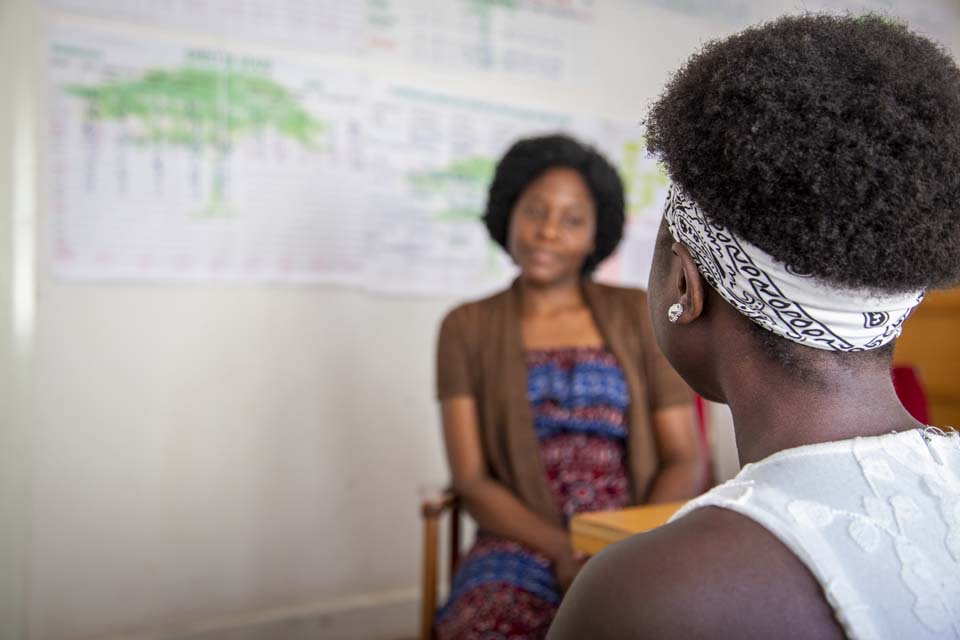 Anodiwa Chiwasa talks with a counselor at a shelter for survivors of gender based violence in Zimbabwe.

*Anodiwa Chiwasa, 20, just wanted an opportunity to earn her way in life. Her uncle found a job for her as a nanny and maid to a couple in Kwekwe, a city in central Zimbabwe. One day while she was preparing school clothes for the two children in her charge, their father pushed her into the room beside his children’s room and raped her. Neither her employer’s wife nor her uncle believed her when she went to them for help. They refused to take Anodiwa to the hospital when she asked them to. The wife locked her in a room to prevent her from reporting the rape. Anodiwa escaped and eventually found her way to the police station in Bulawayo. The police officers brought her to the Musasa shelter.

“I felt so sad, angry, a lot of emotions. I felt as though it was my fault, but I know I didn’t do anything wrong. I was just trying to work hard and make a life for myself,” says Anodiwa.

Only about 21% of women who have been abused seek help from the police. Counselors from Musasa serve as liaisons with the police and other government agencies. This eases case reporting and legal processes for the survivors. The man who raped Anodiwa was arrested but has been released on bail. Her case is still going through the court processes.

In the shelter, Anodiwa received one-on-one counseling to help her deal with the trauma. CRS also provided referrals, through Musasa, for her to get HIV testing and STI screening.

The women who are the primary focus of abuse are often not the only victims. *Danai Zenda, 20, her mom and four siblings have been in the Musasa shelter in Bulawayo for two weeks. Danai and her siblings go to school from the shelter. The younger children run and play in the courtyard. Danai says this is the most peace they have had in years. Danai’s father died when she was ten. Her mother remarried two years after. Right from the beginning, Danai did not like her stepfather. She went to live with her grandmother for a while but missed her family, so she came back.

“He maltreated us [the children], often refusing to give us food and shouting at us, but what made me furious was the way he treated my mother,” says Danai. “He would throw her against the wall, embarrass her in front of other people, and sometimes even tear [off] her clothes in public.”

From the years of abuse, Danai’s mother now has chronic back pain for which she has to take daily medication.

Danai says, “We tried to leave several times, but he would find us and drag us back or beg, and my mom would go back.” 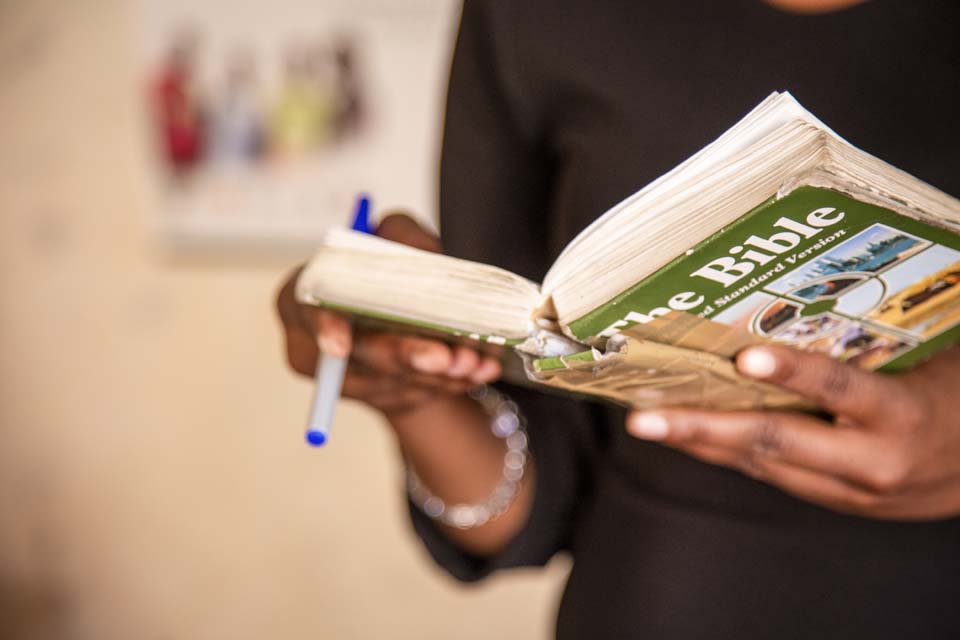 Danai Zenda shares Psalm 72:12-14 at a Bible study on Sunday morning at a shelter in Zimbabwe.

At the shelter, Danai and her siblings receive family counseling and their mom gets one-on-one counseling. Counseling is helping them process their trauma by teaching them methods of communication that do not include violence. Without counseling, many victims or witnesses of recurrent abuse begin to see patterns of violence as an acceptable method of social interaction.

“My siblings have been affected,” says Danai. “Before we came here, I noticed that my younger siblings, especially the seven and four-year-old, were beginning to engage in violent play, hitting each other, yelling, and they found it difficult to communicate in other ways.”

Through the Musasa shelters, CRS is providing Danai’s family with legal services and have helped obtain a restraining order to ensure Danai’s stepfather does not bother them again. Danai and her siblings are also receiving education subsidies to help pay for their schooling.

“When I think about how God is forgiving, I think that sometime in the future, I can forgive my stepfather,” says Danai. “I do not want what happened to me to happen to anyone else. For now, I hope to finish school and get a good job where I can help people in their homes, to see that they are living a good life, encourage people who have been victims of abuse, and help them get better.”

Looking toward the future

Personnel work closely with every survivor who is preparing to leave a Musasa shelter, so that they can find the most supportive setting to move to.

Charity will go to stay with her brother while she waits to have her baby. The Salvation Army, a CRS partner on the Pathways project, has enrolled Charity in school, which she will begin next term after she has had her baby.

Anodiwa hopes to find a job as a maid or perhaps go back to school if she can find a way to pay her school fees. She does not have family that can take her in so she is ineligible for education subsidies. After Anodiwa leaves the shelter, for at least nine months Musasa will continue to check on her to make sure she is coping well.

CRS will provide education subsidies so Danai can continue her schooling. Danai’s mother has left the shelter and is looking for a place where the whole family can live. As soon as she finds a place, Danai will join her.

For Charity, Anodiwa, and Danai, the shelters have provided space and time to heal as they begin to pick up the pieces of their lives. But as the magnitude of the problem becomes known, it’s clear more shelters and programs are needed.

*Names have been changed for security reasons