It wasn’t the first time Aamiina’s* husband had raised his hand to her, but this time her injuries were bad enough that she decided to seek help.

“He beat me so hard I had bruises on my chest,” says Aamiina, who has lived in a camp for internally displaced people since her family was uprooted by severe drought in southern Somalia three years ago. 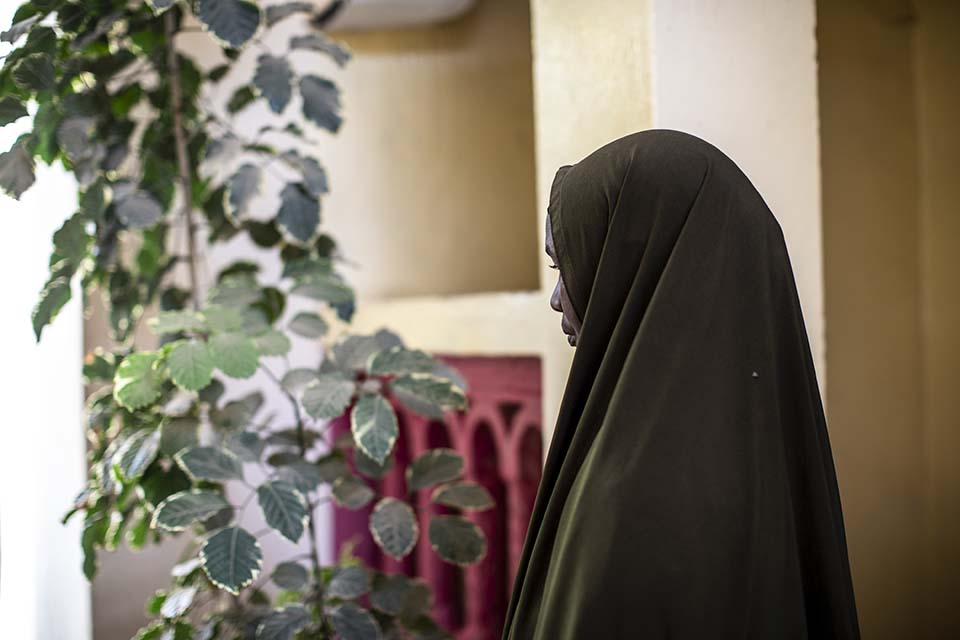 Aamiina was helped by a service that supports survivors of sexual and gender-based violence in Somalia.

Aamiina’s husband is a day laborer, earning money by transporting goods in a wheelbarrow. The family’s lack of income was typically the catalyst for their confrontations.

“He doesn’t give me any money. When I ask him for money, that’s when he beats me up,” Aamiina says. “This would happen all the time.”

In Somalia, survivors of sexual and gender-based violence are often hesitant to seek help or even report cases to the authorities. They also face numerous cultural, procedural and logistical barriers when it comes to obtaining legal assistance and justice.

So Aamiina sought help at a center that supports survivors like her. The center, funded by the U.S. Agency for International Development’s Office of Foreign Disaster Assistance and operated by a Catholic Relief Services partner, provides comprehensive services including counseling, medical referrals, psychosocial support, legal advice and case management, and has a safehouse where survivors can stay. As part of the initiative—known as SHArPEN: Somalia Health, Protection, and Nutrition project—partner staff also distribute solar lighting, conduct outreach, and hold education sessions in camps and via radio messages to raise awareness about gender-based and sexual violence.

Mustafa, a lawyer with the partner organization, says they take a variety of approaches to cases.

“When a survivor comes to us, we can serve them in a formal way or an informal way,” Mustafa says. “The formal way is going through the government legal system. The more informal way is to sit with the camp elders. We say, ‘Here is one of our sisters. She has this problem. We want to solve it.’”

In the latter scenario, it is often easier to reach a solution in a timely manner that is suitable for the survivor.

“If everyone agrees with the decision, then that is the decision that is made. If not, then they go ahead with pursuing things through the formal legal system,” Mustafa explains. This involves registering a complaint with the police and presenting the case in court. However, Somalia’s legal system can be slow and unreliable.

In Aamiina’s case, they chose the informal route but only proceeded after allowing her the time she needed to recover psychologically. 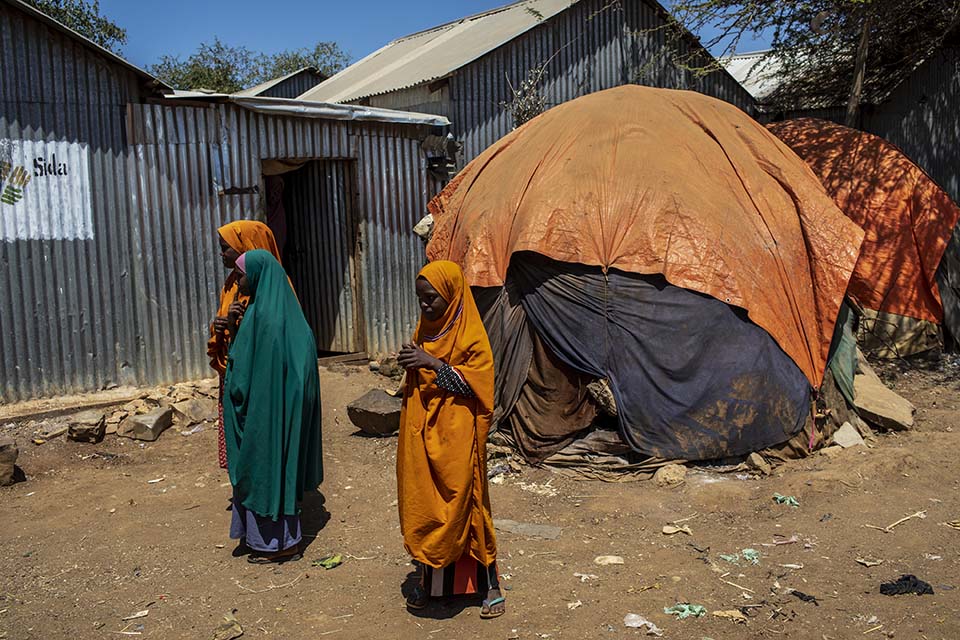 People walk through a camp in Somalia, where CRS delivers services that include access to primary healthcare, a complete program focused on community management of acute malnutrition, comprehensive services for survivors of sexual and gender-based violence, and access to clean water.

“When women first come here, they have trauma and are confused,” says Nurta, a psychosocial counselor at the center. “So, you make her feel at ease, you comfort her, you tell her that the situation she is in now can be healed. We tell them they are not the first person to experience this, that they can also come through it, that they are not alone.”

For Aamiina, that acceptance and understanding helped her get through the ordeal.

“When I first came to the center, I was so worried. I was crying. I was really depressed and stressed,” Aamiina says. “I was provided with legal aid and counseling. They gave me some clothes. They took me to the safe house and I stayed there for several days. After some days, I really felt at ease again.”

Meanwhile, staff from the center spoke with Aamiina’s husband and counseled him as well.

“They had a discussion with my husband to help solve the issue between us,” Aamiina says. “It was decided that I should stay alone for a couple more days. When I felt like I could really talk to people again and there were no more feelings of stress, they took me back home.”

Ultimately, the intervention helped improve the dynamic between Aamiina and her husband.

“When I went home, my husband was really happy. He was in a good mood and he greeted me really well,” she says. “Now, there is an understanding between us. He does not beat me like he used to.”

While income remains an issue, Aamiina’s husband tries to budget money for her and their four children as best he can. “If he earns a lot of money, he will give me enough to sustain the family for one week. If he gets just a little money, he gives me money on a daily basis,” Aamiina says.

He has also stopped chewing khat, which had been another catalyst for their quarrels.

“When he uses khat, he gets very angry. I would tell him to stop, and he would beat me up,” Aamiina says. “He has finally stopped chewing khat. That is why we have a good agreement now.”

After her experience, Aamiina began advising other women in the camp.

“I have come across 10 other couples who were having similar problems. I referred them to the center. They are being provided with the same kind of support,” she says. “Some of them it has really helped but some it did not, and they are still having problems.”

Some, like 21-year-old Idil,* pursue options that do not involve reconciliation. Idil sought help at the center recently following an altercation with her husband that left her with back pain and multiple bruises. 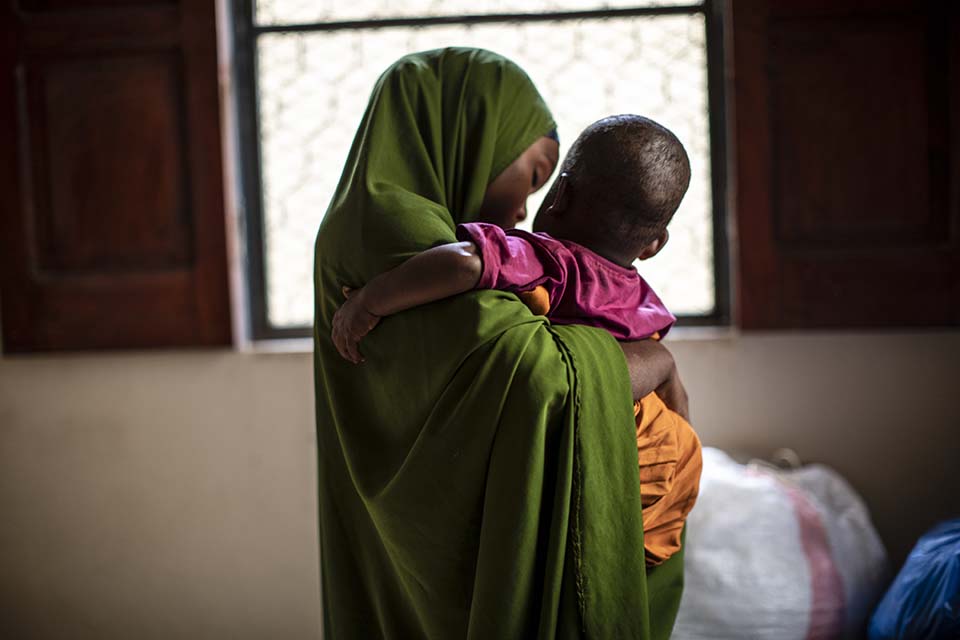 Idil holds her child at a center that supports survivors of gender-based violence in Somalia. Idil received support from the center following repeated altercations with her husband. Photo by Will Baxter/CRS

“My husband uses drugs like khat, so when I ask him for money to pay the bills or buy food, he says, ‘I don’t have any money for you,’ and he starts beating me,” Idil says. “I cannot go back to my house because I do not feel safe. My husband is very violent. I even fear for my life.”

Idil, who was referred to the center by a camp elder, says she wouldn’t have had the courage to leave her husband if it weren’t for the center.

“I wouldn’t have been able to do anything, because my mom is not living anywhere near here, so my only option would be to stay with my violent husband,” Idil says.

Yusuf, a protection training specialist, says the center has a high success rate when seeking justice for survivors.

“Out of the cases we deal with, 90% get the justice they deserve,” Yusuf says. Before the program, when camp elders or religious councils dealt with these cases on their own, the rulings rarely resulted in justice for the survivors. Often women would not even present their case due to fear, trauma and social stigma.

“We talk to the elders about the consequences and the benefits” of respecting women’s rights, children’s rights and gender balances, he says.

Ali, a camp leader, says the SHArPEN initiative has improved understanding in the camp about the negative consequences of gender-based and sexual violence and related issues.

“It has made the community aware of gender-based violence and the processes and procedures to go through if someone in the community has experienced it,” he says, pointing out that he has referred around 30 rape and sexual violence cases to the center since 2017.

Previously, he says, survivors of assaults would not come forward because of the social stigma associated with rape and gender-based violence. Today, women are more likely to seek help.

“Now they will get the treatment they require. There is a safe place where women who experience these issues can stay. They are helped with trauma healing through counselling and helped with legal aid,” Ali says.

*Names of survivors have been changed to ensure anonymity.

A prayer asking God to help us recognize family in each of His children, to know them as brothers... END_OF_DOCUMENT_TOKEN_TO_BE_REPLACED