Dang Van Han cannot help but smile as he scrambles to harvest his modest pepper crop.

While most in his small village—nestled in north-central Vietnam’s Quang Tri Province—view this work as a chore, for the 54-year-old, a weight has been lifted from his shoulders. 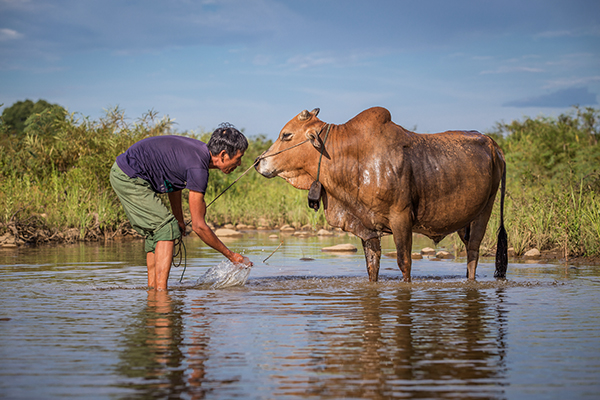 Han washes his cow in a nearby pond. He feels much happier now that he’s better able to support his family. Photo by Lisa Murray for CRS

“I feel free now that I can work and make a real contribution. It means the world to me,” says Han, while looking over his collection of bright green peppercorns from the day’s harvest.

For Han, such work would have been difficult just a few years ago, as physical disabilities and pain have been constant companions through much of his life.

“The pain would be so strong, sometimes it was too much. Things were tough for me and my family,” he says, sitting next to his mother, sister and daughter, who share a small farm.

Life first changed when Han was 12. While clearing farmland, he was left grievously injured after accidentally triggering a land mine—a legacy of the Vietnam War.

He suffered severe intestinal injuries and partial loss of his eyesight. He became one of thousands of children left with life-changing disabilities caused by land mines or explosive remnants, which are still scattered across more than a third of the land in six central Vietnamese provinces.

“Every day was a challenge. I had to rely on other people to get by. There was no other choice,” says Han, whose initial operation failed to restore his health. With no social safety net, his mother and sister became his primary caregivers.

Early every morning, Han lays out his peanut crop to dry under the hot sun. Photo by Lisa Murray for CRS

Han began cultivating cassava, pepper and peanuts to make ends meet, relying heavily on his extended family to share the workload. Limited profits were eaten up by the cost of hiring outside help to harvest the tall pepper vines. After Han’s wife passed away, his sister, Thuan, was forced to take on a greater share of the work. Even so, income was so limited that the family had to go into debt to afford school for Han’s daughter.

“This accident hurt me, but it also hurt my whole family. We all suffered—until things changed,” he says.

This change came 2 years ago when he met a community-based worker supported by a Catholic Relief Services project, funded by the U.S. Department of State’s Office of Weapons Removal and Abatement, that helped land mine survivors in Quang Binh and Quang Tri provinces.

After initial consultations, Han was referred to a hospital in the city of Hue for a second operation, which was funded by the project. Following the corrective surgery and 25 days of recovery in the hospital, Han was released to start a new life.

“I no longer had severe pain when walking or working. I felt strong and was able to move around more easily without pain and do everyday tasks I could not do before,” he says.

After helping people like Han through surgery, the 24-month project took a more holistic view to ensure survivors with disabilities made full recoveries and became valuable contributors to their families and communities.

In total, the project helped 242 commune-based workers and 2,060 family members of survivors enhance their capacity for home-based care, learning to provide basic rehabilitation techniques and psychosocial support to 3,219 survivors. In addition, 236 survivors with disabilities, including Han, also received in-depth medical examinations and treatments.

CRS’ signature aftercare was a pivotal part of Han’s recovery. The monthly visits from his commune-based worker developed into a valued relationship that has continued even after the project ended in April 2017.

“It makes me feel good that there is someone caring and thinking about me outside the family. It makes me happy,” says Han. 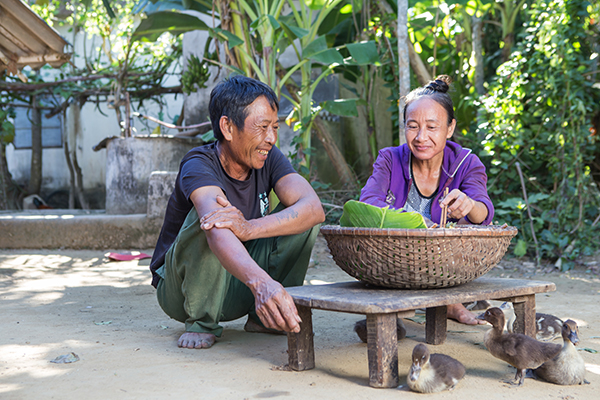 Han and Thuan take a break from their work to snack on jackfruit. It's only since Han’s surgery last year that the siblings have been able to take on an equal share of the workload. Photo by Lisa Murray for CRS

On a family level, the project also delivered meaningful change.

Thanks to Han’s increased mobility and workload, financial pressures eased, with a more than 60% increase in income from pepper farming. Free from his physical disabilities, Han has less need to hire outside help, and Thuan has more time to spend with her children.

“He now makes a bigger contribution to the family and our income has increased. I don’t need to help him as much. I can also now take better care of myself. We still need support, and I’m happy the commune-based worker still comes to visit,” says Thuan.

The project’s low-cost and low-input approach have been warmly acknowledged by local authorities, who now have greater awareness and a heightened receptivity to similar projects. The project’s success also opened the door for CRS to help more survivors with disabilities become fuller and more active participants in their communities.

“We don’t feel alone now. My commune-based worker always reminded me to be happy and work hard. And that is what I’m going to do,” says Han.

August recess is a key moment to meet with your members of Congress while they are out of session... END_OF_DOCUMENT_TOKEN_TO_BE_REPLACED

Use this calendar for key dates to reflect and take action with your community to address climate... END_OF_DOCUMENT_TOKEN_TO_BE_REPLACED