In Niger, Chaibou Alzouma now sees the truth in the timeless biblical lesson of Galatians 6:7:  You reap what you sow. 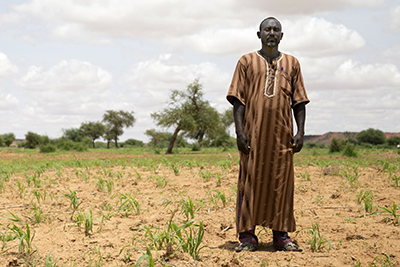 With support from CRS, Chaibou Alzouma is helping farmers in his community cope with the effects of climate change by selling new, local varieties of seeds that are more resilient to drought. Photo by Michael Stulman/CRS
That was not always the case for this 57-year-old farmer who spends most days on his feet, working long hours under the scorching sun of West Africa. No matter how hard he worked, his crops—millet and sorghum—were limited by devastating droughts or encroaching desert sands.

“People used to go to the market to buy ordinary seeds,” says Chaibou. “Sellers promised it was good, but when they went to sow it, it wouldn’t grow well.”

The idea behind CRS’ program, which is funded by UK aid from the British people, is to help farmers in the Sahel cope with the effects of climate change. If farmers have seeds that are better adapted to the environment, and training on how to use them, they will increase their yield and sustainably improve their standard of living.

For years, farmers like Chaibou have struggled with poor harvests because of the changing environment. 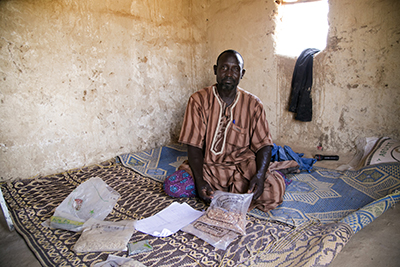 Chaibou Alzouma, with seeds he is selling through a CRS project in Niger. They grow faster and are more resistant to drought. Photo by Michael Stulman/CRS
"The rainy season isn’t the same as before,” he says. “The rain supply is not enough for a good harvest.”

Those better seeds—local varieties—have existed for a long while, but they weren’t available in rural communities like Mara Village where Chaibou lives, roughly 550 miles from the capital, Niamey. The companies that sold the seeds weren’t aware of demand and had no distribution system.

CRS and our Caritas partners in Niger were well positioned to jump-start the discussion between private seed suppliers and rural communities.

Chaibou knew and trusted CRS. “During hardships, CRS has helped us cope,” he says.

First, CRS held a competition among commercial seed providers to identify those interested in setting up a viable and sustainable distribution network in rural areas.

After a local company based in Niamey was chosen, CRS began working with community leaders in rural villages to select people to market and sell the seeds.

Chaibou accepted the nomination from his community, and CRS worked with the company to ensure he would receive sales and marketing training.

“I’m a farmer first and a community agent second,” he acknowledges.

CRS is also working directly with the farmers so they understand how and when to plant the seeds to get the best results.

Fati Seyni explains, “We have to dig pits, add manure and mix it with the dirt. We plant the seeds after it rains.”

“I’m thankful for the new techniques—for bringing hope—so we can produce more on our land,” she says. “Before, the rains weren’t enough to bring up the crops. The training offered solutions to help crops grow faster.”

Selling seeds has helped Chaibou earn around $80 this year. “I can buy food for my family. I have a water pump for the rice field, and now I can buy fuel.”

And it has also helped his community of Mara begin to pull out of a downward spiral. Before, droughts and floods would never allow residents to build up the crops and cash reserves needed to withstand the next shock.

Over 3 years, CRS and our partners plan to help many more poor farmers in the Niger River basin of Niger and Mali through this project, called Scaling-Up Resilience for 1 Million, or SUR1M.

Pray and reflect with your community on our call to respond to the needs of our sisters and... END_OF_DOCUMENT_TOKEN_TO_BE_REPLACED

Reflect on the impact climate change has had on our planet and pray for the Holy Spirit to change... END_OF_DOCUMENT_TOKEN_TO_BE_REPLACED