There is a song Mary Kamangeni hums as she places bundles of dried stalks on the land where she's planted corn. "My life is like the water in the stream." she sings softly in Chichewa, the language of Malawi. "It flows in one direction." 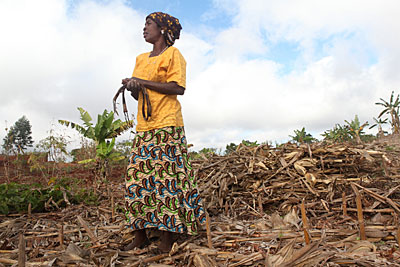 Mary Kamangeni surveys her cornfields in Malawi. To help improve her crop yields, she uses conservation agricultural methods—including crop rotation, composting and mulching—she learned from a CRS-led partnership. Photo by Sara A. Fajardo/CRS
The stalks crack and rustle under the weight of her hands that smooth them along the terraced rows she's planted. "My life is like the leaf: When it falls from the branch, it doesn't return," she croons, as she works her way down another row, softly dispersing the papery stalks along the length of her 1½-acre field.

"My life is like the newborn child who cannot return to his mother's womb," Mary sings, finishing her song. Her field is made golden by the covering of cornhusks.

In the 400-family village of Thukawa, Mary's fields look far different than those of her neighbors. Her rows of corn are closer together and covered in decomposing stalks, whereas others are clean, round mounds spaced farther apart. Once ridiculed for using cornstalks as a way to retain water in the soil and nourish her fields, Mary now has results that speak for themselves. Where she once harvested seven 150-pound bags of corn in a bountiful year, she now averages 38 of those bags in an average year.

From 60 Pounds to a Renewed Life

Like the song she sings, Mary knows not to dwell in the past. All that is left is to flow forward. Gone are the days of marriage to her short, quick-footed soccer-player husband, Labson. AIDS took him, as it has so many in Malawi. They met during a soccer match while still students. She became pregnant. They married and went on to have three children. He worked in statistics and provided well for his family. Mary dedicated herself to her husband and children until AIDS claimed Labson, leaving in its wake a single mother with no income to speak of and a body flailing in the grip of HIV.

Mary's health deteriorated. She tried to farm, but her energy dwindled. So did her weight. Hospitalized at the peak of her illness in 2007, she weighed 60 pounds. Her son brought her food. Her mother, Steveria, sat at her bedside and spoke encouraging words. Mary couldn't hear. She couldn't talk. She couldn't see. Over the course of a year, through a regimen of antiretroviral therapy supplemented by a high-energy, high-protein, high-fat peanut paste, Mary's weight was restored to a healthy 110 pounds. 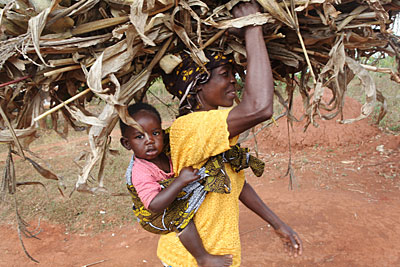 Mary Kamangeni carries her grandson Trust while she gathers dried-up cornstalks to spread in her fields to help retain water and nurture the soil. Photo by Sara A. Fajardo/CRS
With her life renewed, Mary decided there was no looking back. In between her intermittent hospital stays, her first grandson, Akimu, was born. Four generations were now under Mary's roof: Mary, her mother, her son and daughter-in-law, and little Akimu. And they no longer had Labson's income. Mary decided to dedicate herself to agriculture and work harder than even the healthiest person in her village.

Mary planted corn, tomatoes and onions, but she was at the whim of the weather. Cyclical droughts in Malawi provide little cushion for those who rely on rain alone to water their crops. Mary worked hard, but the rain started and stopped and then didn't return. Corn, a staple food in the Malawian diet, wilted on its stalks and died.

When it comes to changing from the way things are traditionally done, there are three types of people: the believers, the skeptics and the converts. Mary was one of the believers. She knocked on death's door and had returned to tell the tale. Her time in the hospital taught her that, to survive, you sometimes have to put your faith in things you don't understand—such as antiretroviral medications and ready-to-use peanut paste. So, when she was introduced to conservation agriculture through the Catholic Relief Services-led Wellness and Agriculture for Life Advancement, or WALA, project, Mary was ready to try the new techniques.

With generous funding from the American people through the U.S. Agency for International Development's Office of Food for Peace, WALA aims to help nearly 215,000 families provide food for themselves in eight districts in southern Malawi by 2014. A partnership of eight agencies led by CRS, WALA empowers farmers with tools that help build their resilience to recurrent drought.

The project is teaching farmers in Mary's village about conservation agriculture, which includes crop rotation, composting, tree planting and mulching. WALA also focuses on child health and nutrition, as well as employment opportunities for families.

The neighbors scoffed at Mary when they first saw her bundling up dry cornstalks to spread as mulch in her fields.

"You'll choke your corn," they warned, when they saw how she completely covered the ground. But Mary had faith in what she was learning and continued laying down the stalks, leaving no sight of the soil underneath. 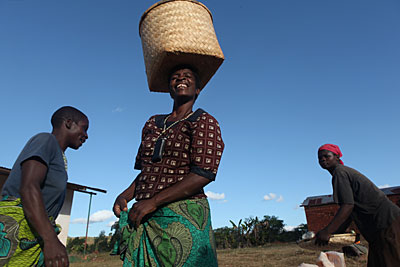 At an upcoming wedding for her niece, Mary Kamangeni, center, will serve the sundried corn she's carrying from her fields in Malawi. Her crops are thriving because of the new agricultural techniques taught in a CRS project. Photo by Sara A. Fajardo/CRS
To demonstrate the effectiveness of the new methods, Mary planted one-quarter of her field using the new methods she learned; for the remainder, she used traditional methods. The results were remarkable: In the "test" field, lush green corn plants towered over the slightly anemic adjacent crops.

The next year, several of the initially dismissive fellow farmers came to Mary to learn her techniques. In the past few years, Mary has taught conservation agriculture to more than 69 families in her village. They, in turn, have taught others.

People are slowly converting to Mary's way of doing things, and the village is reaping the rewards. This year, Malawi was hit with another drought, and even though Mary hasn't harvested as much as last year, she still has far more corn in storage than she did during the years she planted using traditional techniques.

Mary sells some of her surplus of corn to reinvest in her farm. She has purchased seeds, such as chili peppers, that she harvests to sell as cash crops. She also has invested in goats, which provide meat for her family and fertilizer for her fields.

A Celebration With Plenty

In the courtyard adjacent to Mary's home is a wooden platform erected for dancing. Her niece will be getting married in a few days' time. Some of the corn Mary has harvested will be fermented so she can make sweet beer. Steveria is drying even more corn in the sun to be used for nsima, a porridgelike corn cake. The family is fattening up a goat for slaughter.

Mary's expects 4,000 guests, one-third of whom will be staying for a meal. She has come a long way from the days when she scarcely had the strength to feed herself. These days, she has both the energy and the means to feed 1,500 people.

Mary's excited about the wedding. She can't wait to dance on the stage and celebrate with her niece.

Mary's life is like the water in the stream. She'll lead her village by example as she flows with the current of life, not looking back—but always moving forward.

We seek daily renewal from the source of all life, and so we pray ... END_OF_DOCUMENT_TOKEN_TO_BE_REPLACED

Our walk with God is reflected in our walk with others, and so we pray ... END_OF_DOCUMENT_TOKEN_TO_BE_REPLACED