Harvests in the Deserts of Chad

Miles and miles of sand stretch in every direction, like an ocean, around the villages in northern Chad’s Kanem Province. There are no roads, only tracks weaving their way around the dunes. The sun pounds down relentlessly. Nothing grows but small shrubs and bushes, occasionally a tree. 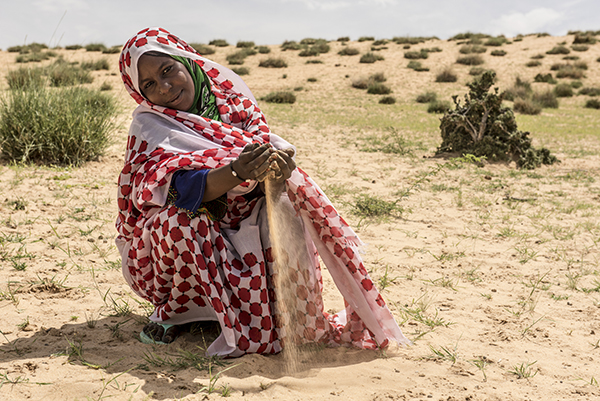 Drought killed most of Mariam Chaffa’s livestock, but with training from CRS, she is learning to care for her animals and harvest healthy crops. Photo by Michael Stulman/CRS

People live at the mercy of the rain. Frequent drought and chronic malnutrition are widespread, but recently one year was far worse than expected. In 2014, drought conditions became so extreme that thousands of livestock died. Meager harvests were consumed quickly, and a surge of hunger swept through the region.

As if that weren’t bad enough, violence by Boko Haram caused people to flee their homes and fields. The violence blocked Chad’s normal flow of trade with its neighbors, Nigeria, Cameroon and Niger.  Food costs for staples like sorghum and millet shot up across the region.

"We faced a difficult moment. Without rain, there were no crops. No crops meant less food for our family and none for our livestock,” says Amina Souleyman, who lost more than 20 goats.

Koubra Abakar, who’s raising a family of nine children in the village of Kournan, agrees.

“It was hard for us. Children would eat sometimes twice a day, sometimes once, sometimes not at all,” she says.

But out there, hope was waiting for Chad’s people.

Tucked between the desert dunes are oases, which can provide desperately needed nourishment for Amina, Koubra and thousands of others. 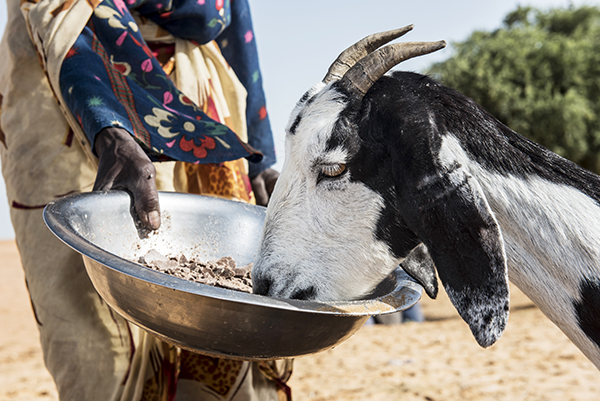 Until now, the promise held by this small bit of fertility had never been fully appreciated or utilized. Before the drought, there was no system to bring water to the earth’s surface. There were no lush gardens, just a few stalks of millet, with palm trees standing in sharp contrast to the barren desert. That was hardly enough for a community to live on.

Catholic Relief Services centered support on these oases, eventually helping more than 20,000 people establish new gardens and irrigation systems, so they could build back better and prepare for the next time drought strikes.

Regular and reliable harvests are now a welcome relief for women like Mariam Chaffa, who visits her local garden three to four times per week.

“We used to buy from the markets, but now we don’t need to because of the garden,” she says. Her community is already seeing a transformation, both inside and outside the garden.

“Since the project began, there has been a change in the house,” says Mariam. “We used to eat two times per day, but now, with what we get from the garden, we can eat three times per day. Our children have more energy. They’re running and playing.”

Mariam grows more than enough to feed her family. She can sell almost three-quarters of her harvest, which allows her to purchase other food, health care and livestock supplies. But the garden’s impact isn’t only economic.

“Now the role of women has changed. We, as women, can work together and go to the market,” says Mariam.

Amina agrees. “Before we were sitting, and now we are getting up. We want to stand up,” she says. “Even when the project stops, we won’t stop. We can continue to work.”

When the drought struck, survival was top of mind.

“Our knowledge was limited. If the goats were sick, we would wait and see if they would recover or die,” says Koubra, who was forced to sell the few goats that survived the incessant heat.

Lost was the opportunity to milk them, breed them and earn money to buy food. Since then, CRS has helped distribute more than 3,000 goats to the most vulnerable households in the region, so they can replenish their stock of animals.

Koubra and her family hadn’t had fresh milk for more than a year, until recently, when she received a voucher to purchase three goats—two females and a male—at a fair organized by CRS and our local partners. The fairs bring together local vendors selling livestock and seeds. Koubra also received training and food supplies to help the goats stay healthy.

With the oasis gardens and new livestock, the future in this bleak landscape is more hopeful.

“If there is another drought, we can survive,” Koubra says. “We can work in the garden. We cannot give up.”

Pray and reflect with your community on our call to respond to the needs of our sisters and... END_OF_DOCUMENT_TOKEN_TO_BE_REPLACED

Reflect on the impact climate change has had on our planet and pray for the Holy Spirit to change... END_OF_DOCUMENT_TOKEN_TO_BE_REPLACED

August recess is a key moment to meet with your members of Congress while they are out of session... END_OF_DOCUMENT_TOKEN_TO_BE_REPLACED