A Hand Up for Kenyan Coffee Farmers

David Wambugu knows how to grow coffee. He knows how to plant it, care for it and when to harvest it. What he doesn't know about his coffee is how it tastes. 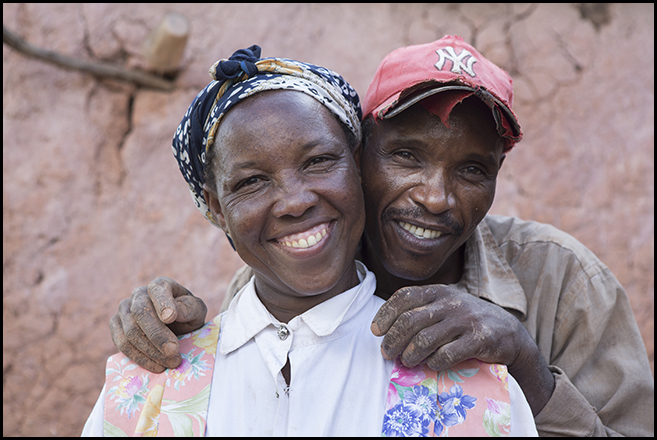 The coffee beans David Wambugu and his wife, Virginia, harvested in 2013 earned 19 cents a pound, not enough to live on, let alone buy a cup of coffee. Photo by Sara A. Fajardo/CRS

At roughly $1.25, a cup of joe at a Nairobi brew house fetches more than David makes selling 6 pounds of his coffee. Drinking it is an extravagance he simply can't afford.

"Coffee was here since before I was born," says David. "I get money from it. Even if it's not much, it's something."

Last year, he and his family netted $247 for the 1,300 pounds of coffee they harvested—about 19 cents a pound. A third of those earnings paid for fertilizer. Another small chunk went to hiring day laborers to help harvest the coffee and a motorbike driver to help tote the 100-pound sacks of coffee to the factory. In total, the fruits of their labor earned them little more than $150 of profit, giving them less than 50 cents a day to live on.

Day labor, when they can get it, and selling the bananas they grow, supplement their coffee income. Sometimes they borrow money and cut back meals to one a day. But even then it's tough to meet expenses. In 2003, David's wife, Virginia, was diagnosed with tuberculosis, a condition that has gradually worsened. The family's medical bills were more than $700 in last year.

"It is impossible to feed my family on coffee alone," David says.

That's why Catholic Relief Services and our partner Caritas Nyeri are helping coffee farmers like David increase their earnings. 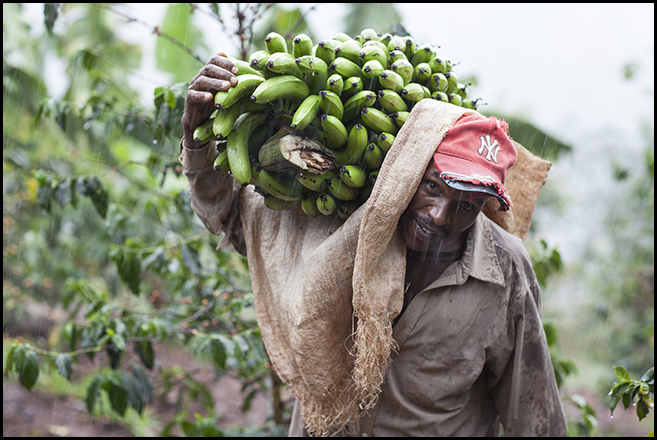 Coffee farmer David Wambugu learned to diversify his crops and grow his family's income with help from CRS and its partners in Kenya. Photo by Sara A. Fajardo/CRS

Simple math shows that small-scale coffee farmers in Kenya do not earn enough from coffee to provide for their families. But with generous funding and guidance from the Vermont-based Keurig Green Mountain Coffee Roasters, CRS and Caritas Nyeri have been helping Kenya's coffee farmers diversify their income so they'll be more resilient to hunger and shocks like medical bills or other emergencies.

Our approach helps in three ways: by training coffee farmers to integrate bananas and legumes with their coffee crops, by providing dairy goats for milk and income, and by establishing Savings and Internal Lending Communities to help farmers access loans and help families with long-term financial planning.

Coffee farmers in Nyeri have long been discouraged from intercropping. Some coffee buyers refuse to purchase coffee that has grown alongside any other crop. So when the Keurig GMCR project was first introduced, Caritas Nyeri project coordinator George Mureithi and his team had to teach farmers and buyers about the benefits of intercropping.

In addition, bananas can be harvested year round, providing coffee farmers a consistent source of food and income. The project not only teaches farmers the benefits of intercropping, it also provides banana shoots and legume seeds and teaches farmers the best practices to get the best yields from all three crops.

"We used to plant bananas, but we had low yields," David says. "We had no training in how to manage our bananas. … Now we have so many bananas people come to us. Selling bananas, I can purchase what we don't grow—like rice and maize—or use the money for things like hospital bills."

Also, the quality of David's coffee beans has improved. 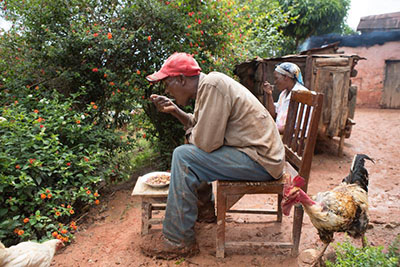 David Wambugu and his wife, Virginia, who has tuberculosis, can eat more than one meal a day thanks to the new farming techniques, goats and financing a CRS project provided. Photo by Sara A. Fajardo/CRS

Eight dairy goats bleat from the wooden pen David built for them. The project gave him a doe that gave birth soon after. He later took out a loan from his SILC group to purchase a second goat, which also gave birth. Over time his herd has grown, providing his family with up to 3 quarts of milk a day—and vital nutrients that are helping Virginia regain her health.

"My immunity was very low," Virginia says. "To boost it I was told to drink goat's milk. A liter of goat's milk is 80 cents. If we didn't have our goats we would not have been able to afford the milk."

The goats also help with other expenses. "When the goats give birth we can sell the kids and use the money for things like hospital bills," David says.

A gift of health

Raindrops softly pelt a canopy of large banana leaves as David Wambugu wades through calf-high muck to slice a pod of bananas growing alongside his coffee plants. In their mud kitchen a short distance away, David's wife Virginia heats fresh goat's milk for their morning tea while their sleepy granddaughter, Clara, 3, warms herself by the fire.

"[Since the project started] how we feed our family has changed," David says. "Before, we didn't have enough milk to feed both my wife and granddaughter, but now we can each have a glass a day. We can sell the bananas and buy other foods. We used to eat only one meal a day. Now we eat three."

For Virginia, the biggest gift from CRS and our partners is her health. "If it weren't for this project, I probably wouldn't be here," Virginia says. "[With] the money we've received selling bananas and through SILC loans we've been able to afford my medical care. Before the project, even though I had TB, I had to look for [temporary] work for us to have something to eat. Now we don't have to struggle to eat. We can do with what my husband earns doing [day] labor and working the land."

August recess is a key moment to meet with your members of Congress while they are out of session... END_OF_DOCUMENT_TOKEN_TO_BE_REPLACED

Use this calendar for key dates to reflect and take action with your community to address climate... END_OF_DOCUMENT_TOKEN_TO_BE_REPLACED