The 1,000 days between a woman’s pregnancy and her child’s second birthday are critical to shaping the child’s future. Ensuring good nutrition during a child’s first 1,000 days can impact physical and mental growth—as well as the future of entire societies.

For children and infants under age 2, the consequences of malnutrition can be severe and irreversible. Unfortunately, malnutrition is still a leading cause of death throughout the world.

Despite government efforts, the rate of stunted growth in Rwanda remains high. In 2010 it was 44%—today the latest Rwanda Demographic Health Survey for 2015 still shows a stunting rate of 38% and in certain districts, like Nyabihu, as high as 52%.

Babies who are malnourished in the womb have a higher risk of dying in infancy. Children whose growth is stunted can have weakened immune systems and be more susceptible to dying from common illnesses like diarrhea or malaria. In addition, they’re less able to perform well in school later in life and are less likely to find job opportunities as adults. 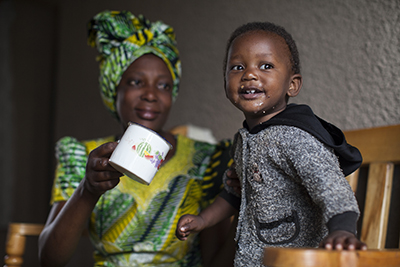 Odette Mukamurenzi, with daughter Olga, participates in a CRS program that teaches families how to grow and prepare nutritious food, and save money. Photo by Laura Elizabeth Pohl for CRS

“You ask the age of child in the community thinking she is around 6 years old, but she tells you she is 10 years old” says Cecile Teteli, CRS Rwanda Gikuriro program nutrition advisor.  “The issue of stunting is very much apparent.”

With funding from the U.S. Agency for International Development, through a program that integrates health and nutrition with water and sanitation interventions, CRS and our local partners are targeting pregnant women, nursing mothers and children under age 5—with a special focus on children under age 2.

By focusing on early interventions, we hope to contribute to the government of Rwanda’s effort to reduce stunting rates among children under age 5 to 29.9% by 2020, in alignment with Rwanda’s Fourth Health Sector Strategic Plan targets.

A balanced diet and approach

Keza Evelyne is a healthy child. Looking at her it is hard to guess that she was once struggling with severe malnutrition. Her mother, Nyiracumi, has high expectations for Keza. She wants her to be healthy, complete school, help her family and contribute to the country’s development.

When CRS began working with Keza, her little sister and her mother at the Village Nutrition School, Keza was alternating between severe and moderate malnutrition. Nyiracumi attended the classes focused on growth monitoring, rehabilitation of malnourished children, nutrition education, and other group member activities that include training in social and life skills. In the classes, parents bring their children who have signs of moderate malnutrition. Each parent commits to bringing ingredients: Vegetables, like fruits, beans, potatoes and bananas from home, and animal proteins, like fish and eggs, purchased using social funds from their saving groups, or eggs from small livestock provided by the program. This way mothers learn how to cook a balanced meal using what is available in their homes. 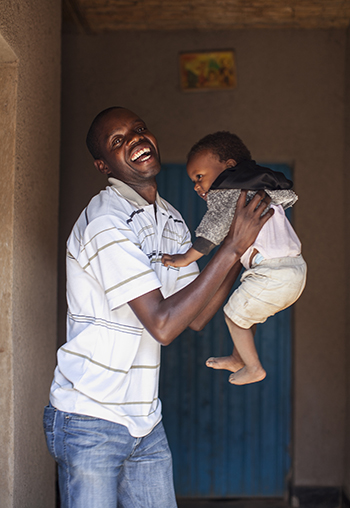 Deodate Nsengimana plays with daughter Olga at their home in Rwanda. Photo by Laura Elizabeth Pohl for CRS

“At the beginning, I did not believe food would cure Keza because I fed her regularly,” says Nyiracumi. “But because I wanted my child to be healthy, I followed the school’s instructions. After the 12 days, Keza’s malnutrition rating improved from severe to moderate. After a second round of classes, Keza’s nutrition status was rated good. I continued feeding her and her sister well, as I now know how to prepare a balanced diet,” she says. “I realized that being poor does not make malnutrition inevitable.”

“Keza was one of the most critical cases of malnutrition we had at the health center,” says Aimable Nkurunziza, the nutritionist who performed Keza’s follow-ups. “We are very happy to see how quickly this program has improved her health.”

Balance is important to this program. Fighting malnutrition in children means more than eating good food. That’s why families like Nyiracumi’s are being taught how to improve their crops.

“I learned that you can have a small farm, but from that small farm you can produce many things,” says Uwamwezi Epiphanie. “I learned how to build a compost site at home and fertilize my garden. I adopted most of the techniques and now I grow so many vegetables and we can use them when we cook. I have something to eat at my house and I can sell some at the market.”

“The first thing that is very visible is the size of the vegetables that are grown. Cabbages are two and three times bigger, spinach and kale leaves are much bigger and healthier,” says Zacharie Manirarora, CRS Gikuriro agriculture advisor. “Every crop is a locally available crop. There is nothing that we introduce that is not already available in their communities. They won’t forget these things because they can see the transformation in their lives.” 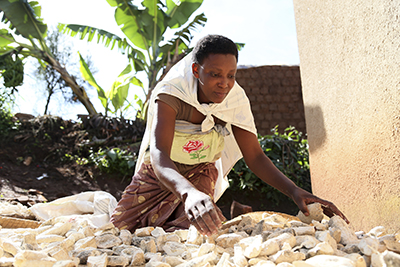 Odette Mukamurenzi is drying cassava, so it can either be sold as cassava chips for animal feed or processed and sold as a flour in the local market. Photo by Michael Stulman/CRS

The program also focuses on building incomes. As part of CRS’ integrated approach, Elina Mukazikeye is a member of a  CRS Savings and Internal Lending Community, or SILC, as well as a member of other Gikuriro groups.

The savings groups bring people together and help them to save money. Elina participates in weekly meetings and has recently taken out a business loan to increase her chicken rearing and build the sales side of her business.

“My son was never breastfed because he was born when I was sick, but thanks to the support I received from Gikuriro, I can feed him well. In addition to rearing the three chickens I got with Gikuriro support, I borrowed money from my saving group. I used some to buy five more chickens and some to start a shop that sells basic household stuff. Now my son eats three eggs every week. I am able to buy milk, sugar, flour and fruits for my family,” says Elina.

“In the beginning, people don’t even think they are able to start income-generating activities. They start with as low as a $5 loan, and then they see they are able to produce more and reimburse on time with interest and most of them increase the loan to expand their activities,” says Anathalie Mukankusi, CRS Gikuriro economic strengthening advisor.

“After paying back the loan, I plan to borrow more money from my SILC group and expand my chicken business. By August 2019, I will be rearing at least 100 chickens,” says Elina.

CRS’ work to end stunting in Rwanda is highly dependent on the commitment of local communities. Fortunately, many communities share the government of Rwanda’s commitment to address stunting through a focus on early childhood development as an entry point in delivering health programs and activities. The program works hand in hand with the local government and local authorities.

“We are happy to work with CRS and the Village Nutrition School as Gikuriro activities support our district development plans to eliminate malnutrition,” said Alphonse Ngarambe, health director of Kayonza district, during the annual planning workshop. “You are supporting us in our own priorities, therefore we are committed to collaborate with you.”