Growing a Business Farmer to Farmer

Photo by Georgina Goodwin for CRS

Founders Mercy Mwende and her husband Mageria and the team of women workers outside the Sweet n Dried factory in rural Chuka Town in eastern Kenya. Photo by Georgina Goodwin for CRS

This is a love story.

In fact, this is a business love story. It includes a cowboy.

A cowboy with a master’s degree in agricultural economics.

And if you happen to like dried fruit, the story is that much better.

It begins with a shy woman named Mercy who approached a neighbor and asked him if she could help him sell fruit. They sold from a truck and it didn’t take the man, Magerie, long to recognize his new employee’s gift for sales.

Well, they fell in love. They married. They continued to run their fruit business from the back of a truck. And they approached their problems as if they were opportunities — for instance, rotting fruit.

They were appalled at the amount of fruit that spoiled between harvest and sales. So they looked at the problem until it became an idea. Dried fruit keeps. So rather than wait for customers to buy their fruit, they dried their fruit so it could wait for the customers.

They named their company Sweet N’ Dried and it wasn’t long before they had another thing that looked like a problem but was really an opportunity. Their business was growing and they weren’t sure how to handle that.

This time the solution showed up in the form of a Farmer to Farmer volunteer who happened to possess the skills needed to help Mercy and Magerie take their next big step. It worked so well, they hosted other volunteers. Each took them another step. And then last year, 2016, with Mercy and Magerie no longer working out of a truck, the cowboy showed up. They showed him their new factory. They asked him to show them how to plan its growth over the next five years. They didn’t want to make any mistakes.

The cowboy knew a little bit about making mistakes.

Farming is a business 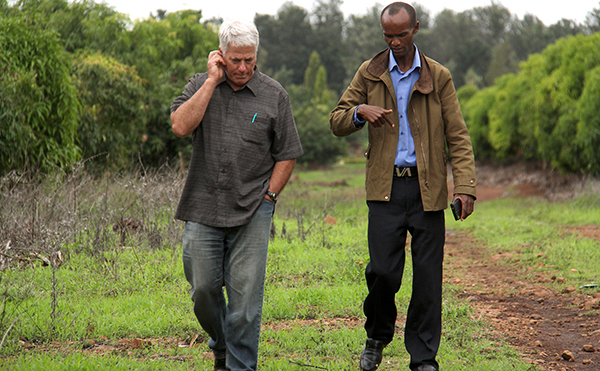 In the mango orchard, CRS Farmer-to-Farmer volunteer Scott Stovall (left) walks with his host Margeria Mwende of Sweet N’ Dried as he explains how the mangos are harvested and processed for drying by his enterprise. Photo by Susan Walters/CRS

Scott Stoval is a self-described “cowboy with a master’s degree.” He feels at home in East Africa.  The climate and landscape have a lot in common with the part of New Mexico where he makes his living. He also understands what it’s like to lack important information.

As a young man, he dreamed of owning and operating a cattle ranch. When the dream came true, he learned just how much he didn’t know. Early on a buyer offered him five cents a pound more for his beef than the previous year.

“I jumped all over it,” he admits. “But what I didn’t know is that the market price was actually $2 a pound more.”

After that hard-knocks lesson he returned to school to get the master’s degree and he started to run his ranch as a business.

Today, that’s where he starts when he sits down with African farmers who request his help.

Fifteen years ago a field extension worker approached him about going overseas to volunteer with Farmer-to-Farmer.  His first assignment took him to Ukraine, the next to East Africa where he found the most “basic agriculture market on earth.

“Back then there were no cell phones, no motorcycles. Farmers in the bush had no idea what the market was doing.”

In Zambia, he helped a group of farmers break down the cost of growing their crops. Most in the group considered only the cost of seeds.  When he asked them about labor, fuel and tools, they began to understand how to tally their true costs.

“I admire how people have adapted the concepts they’ve been taught and how quickly new solutions to old problems like irrigation, soil management, crop rotation or composting, are adopted. I learn more from these assignments than I give,” says Stovall.

Our vision is bigger than what you see today.

He recalls a woman who created a fool proof system to track her profits and losses, even though she could not read or write. Each time money left her pocket for her crop, she would put a stone in a can for each five kwacha (Zambian currency). When she sold her product, she would remove a rock for each five kwachas received. At the end of the day, if there were no rocks left, she knew she made a profit.

“It’s not the F2F program by itself, it’s the entrepreneurial farmers who are working and have a vision.  When a F2F [volunteer] comes in and gives pointed expertise it’s like a boost up the ladder they’re already climbing,” he says.

“What I have learned is that if you give people the concepts, they can figure out how to make it work for their situation.” 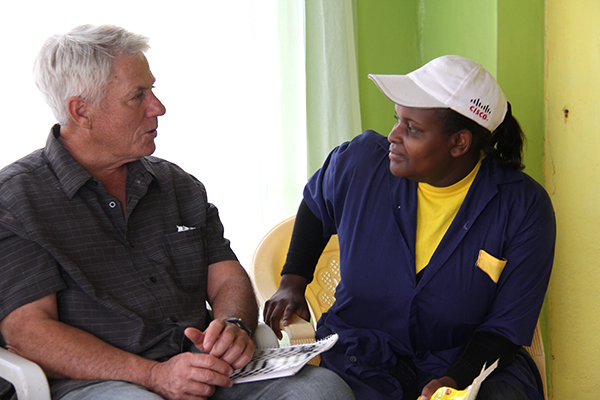 Mercy Mwende (right) welcomes CRS Farmer-to-Farmer volunteer, Scott Stovall to assist Mercy and her husband with writing a business plan, business strategy and production from the company. Photo by Susan Walters/CRS
In November 2016, Scott returned to Kenya for his 14th F2F assignment. He met with the young, energetic Mercy Mwennda and her husband Magerie. They were running their small business drying fruit, mostly mangos and bananas.  They also process flours into fortified porridges for the retail and wholesale markets.

Their factory is six rooms in a small building in the desert northeast of Mt. Kenya in the county of Meru. They picked this location because the arid climate lets them harness the power of the sun to dry the fruit, land was affordable and the local residents needed work.

The business has grown steadily since its start in 2009, a tribute to their tenacity and ingenuity. They are on their fourth design of solar dryers. Magerie, an engineer by trade, is always tinkering and modifying the drying tents to keep them fully functioning.

They are also veteran hosts of F2F volunteers.  Scott was their fifth volunteer — but their very first cowboy. His assignment was to help Mercy and Magerie write their business plan. In it they would describe every aspect of their current and future operation. They had two weeks together.

“We are so looking forward to these two weeks because we know we need this. We want to put all our thoughts, ideas and plans down in one place. Anyone we talk to asks us for these two plans – a business plan and a business strategy plan,” says Mercy.

Scott knows what’s at stake. This business could be the economic engine driving the community to a new place – a buyer for farmers, an employer for local residents, a reason to have hope.

“We’ve never failed in our business together,” Mercy says, “but our vision is bigger than what you see today.”

A woman lays out the mango pieces on racks to drying in the Sweet n Dried factory's homemade solar driers. Photo by Georgina Goodwin for CRS
Entering the factory, visitors are greeted by a reception area painted in the lime green and mango yellow colors that bespeaks the Sweet N’ Dried brand.  The facility is clean and orderly.  Each room has a function and a sign hangs over the door labeling the activity for each – storage, processing, finished product.

Their employees have royal blue uniforms and receive a hot meal each day.  Part of the business strategy involves creating employee policies and incentives.

“It’s important your employees know your business goals so they can see how they can contribute,” Scott tells the couple.

Mercy’s thirst for knowledge is obvious by the way she has prepared for Scott’s arrival.

“Mentorship is hard to come by in Kenya,” she says. Past F2F volunteers helped set up an electronic accounting system; a food marketer helped them understand branding and their competition in the market; and a food scientist looked at their manufacturing processes and food safety. 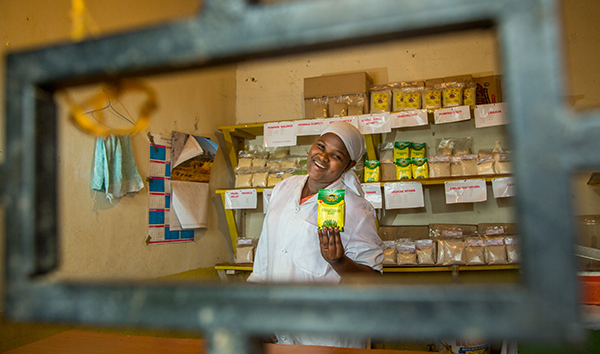 Flora Kathure sells dried mango and other fruits, and ground vegetable flours in Sweet n Dried’s shop in Ndagani Market in Chuka Town, Kenya. Photo by Georgina Goodwin for CRS
“Pedro from Perdue University helped us with our factory safety and plan for expansion.  We sat under the tree next to this building,” Mercy says pointing out the door.  “That was our office before we had an office. Pedro drew the plan for the factory you see today right under that tree,” she says.

“We have worked with other agencies but they had a different style of partnership. Usually there is a project and you have to fit into it. Not so with CRS’ F2F program.

“This partnership fits our needs at every critical stage. The first people who came to help me from CRS F2F sat under a tree here,” she says.  “The next volunteer walked through my factory here showing me how to organize my assembly line. The next came with a computer and showed me how to organize my records and understand my costs.”

Scott knows what banks and investors are looking for and what information they need. “The life blood of farmers is money,” he says.  “They need a line of credit from which to pull when they need it.”

Building a business is tough work, but Mercy and Magerie have an advantage.  Besides being a good team they started out wanting to solve two problems they saw firsthand -- massive amounts of fruits rotting between the time a farmer harvests and consumers buy; and depressed prices when all the fruit in one region ripens and hits the market at the same time. Dried fruit solved the rot problem and allowed them to hold their produce for optimal market conditions.  In seven years they’ve gone from truck to factory.

As they get down to work, the first question Scott asked Mercy is, “What will your company look like if I came back in five years?”

Mercy beams because she sees the long road she’s already traveled to be in this place at this time.

“The next time we get together I hope you’ll meet my employees, my partners and the next generation of enterprise leaders. Together we’ll learn from them.”

After two weeks, Scott reported that they tackled the business plan, the business strategy plan, the production plan, and completed the projections and targets for 2017.

“I can say unequivocally that this project has moved into one of my top five assignments with the F2F program.  It was truly a pleasure working with Mercy and Magerie. The more we visited, the more my respect grew for them.  We had a great time and covered a lot of material. We achieved all of our goals and more.”

And there you have it, a love story with a happy ... beginning and middle. That’s right, the end’s a long way off. But it’s looking better and better every year.

A prayer that God may fill our hearts and our communites with song as we set to doing His work in... END_OF_DOCUMENT_TOKEN_TO_BE_REPLACED