Getting Smarter About Water

For almost all of our 75 years, Catholic Relief Services has been involved in agriculture. We realized early on that the best way to combat hunger is by ensuring local farmers can produce quality food. Our agriculture work has become more sophisticated in the 21st century as more and more people contend with a changing climate. 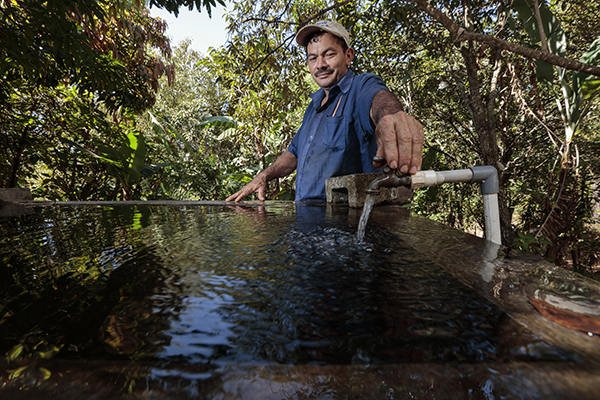 Farmers can’t grow food without good soil and water—that’s why our work is increasingly focused on improving these basic elements.

In Central America, water-smart agriculture protects and restores soil and water resources. We’ve learned that planting the right cover crops replenishes the soil’s nutrients and protects it from damaging runoff. Thanks to the Howard G. Buffett Foundation, farmers now enjoy improved crop yields, increased income and richer soil fertility, all while capturing more rainwater for crop production and the environment.

Relatively easy to implement, water-smart agriculture is cost-effective, and delivers fast results and long-term benefits like sustainability and resilience.  This helps farmers, crops and communities thrive. And that leads to more secure and prosperous farms in areas where farmers now face extreme poverty because of an increasingly erratic and extreme climate.

CRS has similar programs around the world. In the mountains of the southern African country of Lesotho, erosion control has led to the return of fertile soil from what was, just a few years ago, bare rocky ground. Similar results are seen from Ethiopia to Niger as CRS works with local communities to combat the loss of topsoil. Throughout Africa, climate-smart agriculture is helping farmers deal with rising temperatures and erratic rainfall using a variety of techniques that conserve soil and water.

Pray and reflect with your community on our call to respond to the needs of our sisters and... END_OF_DOCUMENT_TOKEN_TO_BE_REPLACED

Reflect on the impact climate change has had on our planet and pray for the Holy Spirit to change... END_OF_DOCUMENT_TOKEN_TO_BE_REPLACED

August recess is a key moment to meet with your members of Congress while they are out of session... END_OF_DOCUMENT_TOKEN_TO_BE_REPLACED