At first, Joyce Nagit didn’t quite know what to make of her husband John’s newfound interest in housework.

But John’s willingness to cook and clean was in response to a three-day training he’d recently completed.  To Joyce, though, John’s actions seemed rather out of character.

“Immediately after the training, I saw him sweeping the compound,” she says. “Then suddenly he was in the kitchen—cooking! I thought to myself, ‘What, what is this?’ It was actually a shock for me,” Joyce says, laughing a little. 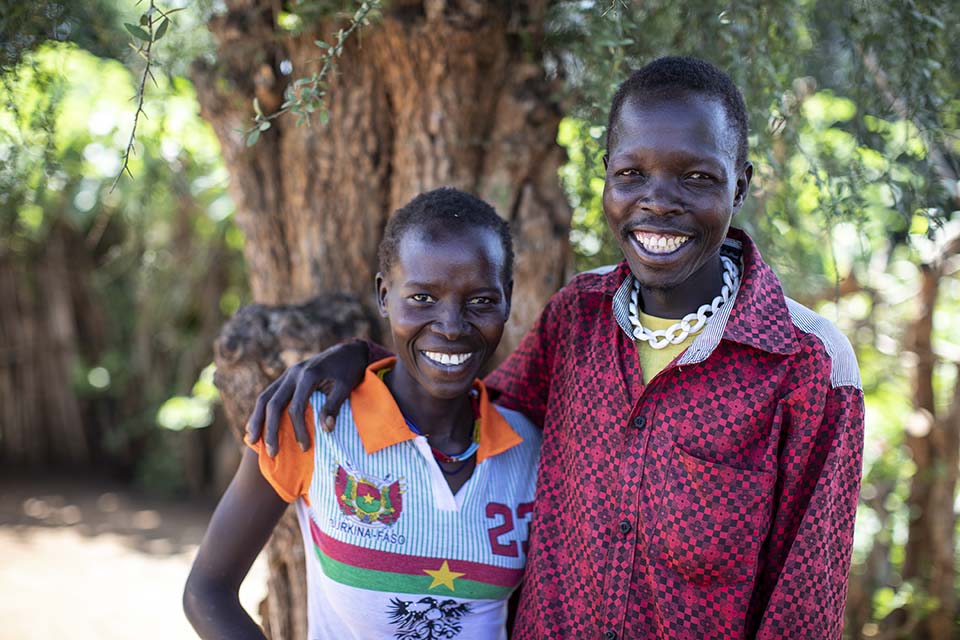 Change Agent John Bosco Lokour and his wife, Joyce Nagit, stand outside their home in Natirea. A father of three, John is taking part in gender trainings through Nuyok.

A 25-year-old mother of three, Joyce asked John, “What did they tell you in this training?” He told her that they taught him how to share responsibilities in the home and how to support women. “Things like that,” she says.

Where Joyce and John live in rural Uganda, women and girls are traditionally responsible for handling all the household chores. They cook, clean, take care of the children, fetch water and are typically burdened with most farming activities as well. That’s why she was so surprised.

John, who is 33, says the trainings really opened his eyes. “The most inspiring thing I learned was about sharing responsibilities and roles in the household. I recognized that there are so many things I had left for the women to do alone. But after the training, I learned that I should support my wife,” John says.

John explains how his entire view of gender roles has been altered. “It has made me realize that we are all equals. The woman does not need to be overworked. We are both human beings. When I do work and she does work, there is time for both of us to rest. There is balance,” he says.

Joyce, who leaves early in the morning for her job as a cleaner at a local health clinic, says the additional help has made life much easier for her.

“I am not as tired as I used to be. The workload at home, which used to be entirely on my shoulders, has been reduced a lot. When I come back now, everything is done already. He has swept the compound. He has washed the children’s faces. He has started cooking. The fire is going, and the water is boiling,” Joyce says. “I am still surprised about all this. This program has really helped us in terms of our relationship.”

Funded by the United States Agency for International Development’s Office of Food for Peace and led by Catholic Relief Services, Nuyok—a Karamojong word that translates to “it is ours”—focuses on helping rural families in three districts of Karamoja—Abim, Nakapiripirit and Napak—build resilience to shocks, enhance livelihoods, and improve food and nutrition security.

In 2019, 914 men took part in gender equity training through Nuyok. They were encouraged to become more involved in activities related to their family’s health, nutrition and hygiene, which would traditionally fall on the shoulders of women in the household. Participants also learned the importance of consulting their wives on household decisions.

“Now we share ideas,” says John. “There is joint decision making. My wife can suggest something, and I receive it positively.”

John uses the example of paying off a debt—something he and Joyce had to discuss recently.

Mark Lokiru, also from Lolachat subcounty, says the training transformed the dynamic of his marriage as well.

Mark Lokiru, right, sits with his wife, Maria Loduk, at their home in Nakurobuin. A father of five with another child on the way, Mark is taking part in gender trainings through Nuyok.

“We try to be faithful to each other, to respect each other’s views,” Mark says. “In case somebody wants something, we have to come together and discuss that thing together before implementing.”

“We needed a new jerry can,” says Maria. She goes on to explain that when she first mentioned the problem to her husband, he did not have any money to spare.

“But,” she continues, “When he got some money, he called me over and said let us go together and buy a jerry can. So, I thought then that this training has really done something to this man’s mindset.”

For Mark, the biggest take away from the training was about how hygiene, cleanliness and sanitation improve health. Afterward, he set about transforming their home into a cleaner, healthier space.

“I have really changed health related things here. This place used to be covered in bush, but I tried to clear it away. I sweep the compound in the mornings. I have excavated a latrine which we are using. We have a bathing shelter now,” Mark says.

“The reason it is good to remove the bush is to avoid the spread of diseases,” Mark explains. “It helps with disease prevention and control. If you leave the place dirty there will be so many insects and mosquitos and flies, and the flies can jump from the dung to the food. This can cause sickness.” Mark learned all of this from his Nuyok training.

Following the training, John constructed a pit latrine, a drying rack for the dishes, and he dug a rubbish pit. Now he is sharing these best practices with other men in his village.

“As a role model, after the training I have started to inspire other men. Some of them have learned how to make those things like drying racks. They have made some behavioral changes too. It is not immediate, but they are trying. I have been engaging with them in discussions during evening visits, trying to pass on the messages,” says John.

Most men are receptive to these new ideas. “They try to get inspired. They will even come and consult me here at my home. They come and say, ‘We really like the way you are doing things,’” says John. “Then they ask me to assist them.”

So far, he has helped five other men in his village to implement many of the ideas he has passed onto them.

For his part, Mark has convinced 10 couples to dig their own pit latrines, and improve their joint decision making. As he sees it, “there are successful and unsuccessful households”.

“I have influenced many of my peers to be successful households. In a successful household, the man and the women are together as one and they share everything, including resources. We are seeing so many changes in terms of sharing responsibilities,” Mark says, beaming.

A prayer asking God to help us recognize family in each of His children, to know them as brothers... END_OF_DOCUMENT_TOKEN_TO_BE_REPLACED