Ibrahim Abu Amsha remembers what it was like to be a child in the walls of the kindergarten in Beit Hanoun, Gaza, that he now runs. He knows the space well because he grew up here. It's the home where his parents raised him. 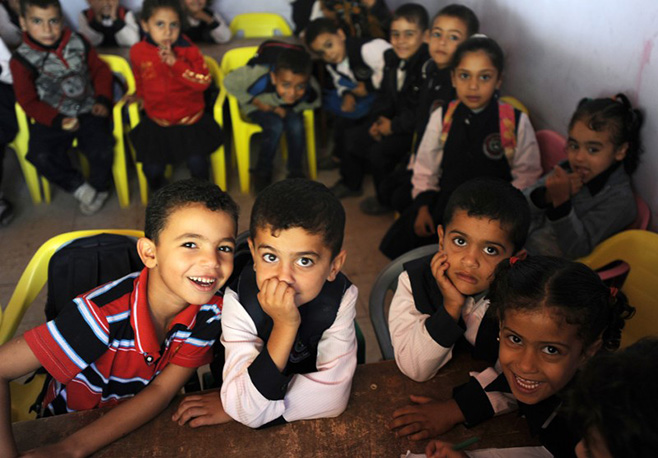 Children have a classroom again, thanks to community partnerships that are rebuilding neighborhoods and lives. Photo by Shareef Sarhan for CRS

Ibrahim transformed his family's home into a kindergarten in 2011 after working as a clinical psychologist in other schools. "I love children and I decided to open my own kindergarten," he says. He named the kindergarten "Al Najah," or "Success," a hope he has for all of the students.

With a master's degree in psychology, Ibrahim was prepared to undertake the work of providing a safe and nurturing space for children to play, explore, learn and grow. But he was not prepared for what happened during the summer of 2014.

For seven weeks, the Gaza Strip was the epicenter of intense fighting between Israel and militants in Gaza. Airstrikes, naval bombardment and a ground invasion reduced large swaths of the Gaza Strip to rubble. Homes, factories, mosques and farms were all affected—and the schools were no exception. Approximately 40% of Gaza's kindergartens, elementary and secondary schools were damaged in the conflict. Thirty-seven were destroyed.

The war caused massive damage to the infrastructure of Ibrahim's kindergarten—so much that it was almost unrecognizable. "I was in shock when I saw the damage," says Ibrahim. The exterior wall around the playground was smashed, the roof was damaged and—even more chilling—bullet and shrapnel holes covered the walls. 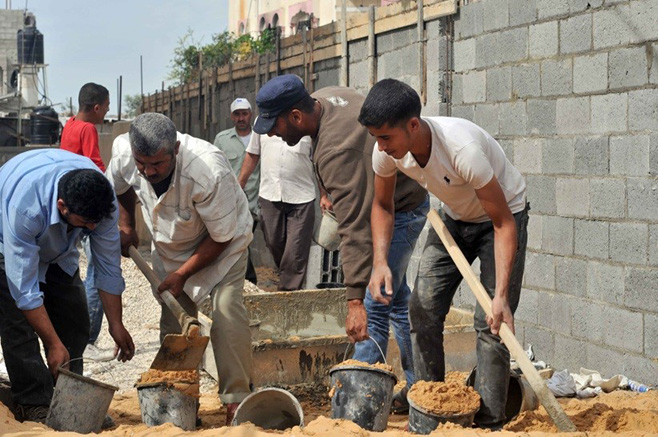 Laborers repair shrapnel and bullet damage to the kindergarten through a CRS cash-for-work program. Photo by Shareef Sarhan for CRS
Although the most obvious damage was physical, Ibrahim knew the building wasn't the only thing affected. "Many of the children here lost one or both parents," he says. "Before the war, there were singular cases of children who needed specialized support. Now, in our free-drawing class, the children are drawing tanks and violence. Everyone needs some kind of psychological support—adults and children alike. We have to reintroduce images of hope," he says.

CRS cash-for-work repaired Ibrahim's kindergarten while providing jobs. Unemployed laborers from the community—all of whom had lost a home during the war—spent their days rehabilitating the school. CRS also employed engineers, carpenters, electricians, plumbers and painters to oversee the work. Improvements included a renovated playground, new roof and exterior wall, plaster and murals to cover the bullet-ridden walls, and a new sanitation system.

Ibrahim is thankful for the assistance. "The children, parents, teachers and I are all grateful that this is a place of education again." But more than anything, he hopes the emotional toll of the conflict doesn't become lasting a scar for the children. "It's extremely important to provide a healthy place for the children, and to not have the daily reminders of war," he says.

Indeed, it is a new start for the 300 children who call this their home away from home. "Seeing children happy is the greatest joy in my work," he says.

Read the latest update from CRS country programs and partners around the world as they respond to... END_OF_DOCUMENT_TOKEN_TO_BE_REPLACED

Read the latest two-page summary from CRS country programs and partners around the world as they... END_OF_DOCUMENT_TOKEN_TO_BE_REPLACED