There is rarely a dull moment at Intisar Atallah's house, nestled in the sun-soaked hills of Halhoul in the West Bank. Especially on a day like today, when the 57-year-old mother of seven is entertaining a few of her grandchildren. There's not much to occupy the younger ones inside her small three-room home, but Intisar does her best. She takes the boys outside to her garden, about the size of a small parking space, where she proudly shows off her homegrown fruits and vegetables. 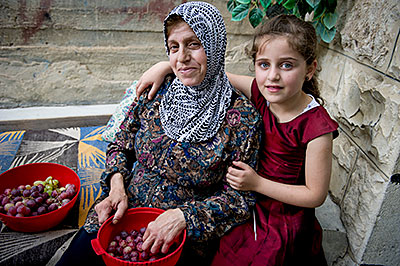 Intisar Atallah enjoys time with her granddaughter in the backyard of her West Bank home. Intisar receives a food voucher through a CRS program. Photo by Karen Kasmauski for CRS
"My grandsons really like the garden," she says. "I'm sure it has something to do with playing in dirt."

Her granddaughter prefers helping Intisar sort grapes harvested from the vines spilling through the backyard trellis. There are very few bad ones, though, as Halhoul is known for having the most scrumptious grapes in the West Bank.

Located about 10 miles north of Hebron, Halhoul's hillsides are dotted with olive, almond and fig trees—but grapes reign supreme. Each September, this small village, which occupies the highest point in Palestine, hosts an annual grape festival.

But for all its agricultural riches, the economy has been devastated by the Israeli-Palestinian conflict. Frequent road closures make the movement of people and commerce extremely challenging and expensive. One in three families struggle to feed their children, and the unemployment rate is about 25%.

Intisar's husband used to work as a stonemason, but an illness sidelined him. And their daughter Nida had to drop out of college because the family couldn't afford tuition.

"I only had another year left at Hebron University," says Nida, 25. "I was sad to drop out, but I hope to go back. Maybe next year."

To help feed her family, Intisar enrolled in a project jointly managed by CRS, the World Food Program and the Palestinian Ministry of Agriculture.

Twenty-five hours each month, Intisar attends training classes in harvesting techniques, greenhouse management, food processing, pruning techniques and the benefits of composting. In exchange, she receives a food voucher worth about $90.

"It's a huge benefit for my family, especially since my husband's out of work. It helps me buy nutritious foods I couldn't afford otherwise," says Intisar. "Plus, I'm learning so much about how to get more food from my backyard garden. I may even be able to sell some of my grape jam at the local market."

With her food voucher, she buys protein-rich foods like fish, eggs and dairy products.

"The voucher also enables my family to save money for other things, like the children's education," Intisar says. 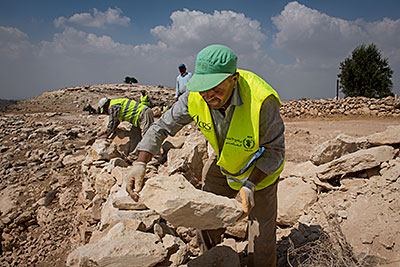 In the West Bank, Palestinian men involved in a CRS food voucher program clear roads for farmers, and in exchange, receive a voucher that helps them feed their families. Photo by Karen Kasmauski for CRS
While women in the project attend training classes, men in the project work 25 hours a month in exchange for their food vouchers. Their jobs also help nearby farmers.

Ahmed Mohamed Abdergades Atash, a father of 10, is part of a labor crew clearing rocks and other debris from a local road.

"Once they're finished, farmers will be able to access their olive and almond trees more easily," says Rana Tubaileh, CRS project manager. "They'll be able to get to their animals without traveling so long. They'll have more time to plant more trees and make more money for their families."

Mohamed Atash adds, "Sure, it's hard work. But going without food is harder."

This year, the project will help about 12,000 Palestinians in the West Bank, providing a major boost to the local economy. All the products purchased by vouchers are locally sourced, produced and sold. Adnan Mujahed, who owns a nearby dairy manufacturing plant that makes some of the yogurts and cheeses in the voucher package, says production is way up since he signed on. Business is up at participating grocery stores, too.

Shop owner Isma'il Qarajah, a father of six, says he's doubled his profits in the 6 months he's been part of the program. "Not only have my sales increased, but I've been able to hire another employee," he says. "Being part of this program has helped me support my family and educate my children. I thank you from the bottom of my heart."

Read the latest update from CRS country programs and partners around the world as they respond to... END_OF_DOCUMENT_TOKEN_TO_BE_REPLACED

Read the latest two-page summary from CRS country programs and partners around the world as they... END_OF_DOCUMENT_TOKEN_TO_BE_REPLACED