It was November 2014,  market day in Damasak, a trading town in the northeastern Nigerian state of Borno, and Moustapha Korimi was selling rice he had harvested from his farm. 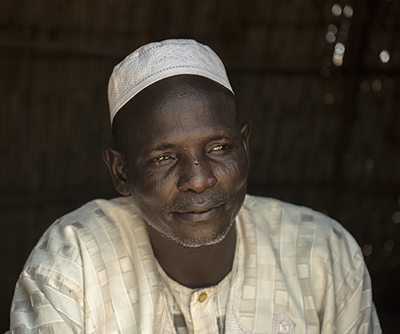 Suddenly, thousands of people were running by him, fleeing for their lives.

There was one way Moustapha and his family could escape the violence that ended up killing hundreds of people, including women and children.

“There is a river in Damasak,” he begins, pausing as if his next words were going to be painful. “Most people don’t swim, but we could survive crossing it.”

Moustapha’s family of 23 swam to the other shore.

“We left not knowing where to go,” says Moustapha.

Moustapha began traveling with his family, stopping at various places in search of a safer home. They would often sleep under a tree. Moustapha foraged for food in the bush, and what little he could find—usually leaves or plant roots, which he mixed with water, stretching it to fill the bellies of his entire family.

More than a year—and 350 miles—later, they arrived in the Diffa region of Niger.

After all his suffering, Moustapha decided to settle in one of the poorest places on Earth. It also happens to be where Catholic Relief Services is scaling up aid for some of the most vulnerable people: those fleeing Boko Haram.

CRS is providing shelter, drinking water, sanitation, seeds and tools, temporary work, and other relief to thousands of displaced people, as well as the communities that shelter them.

A tarp provided by CRS offers shelter and shields Moustapha’s family from the searing sun. And it also conveys an important message to Moustapha and his fellow refugees: the world has not entirely forgotten them.

At least 2.4 million people have been forced from their homes. 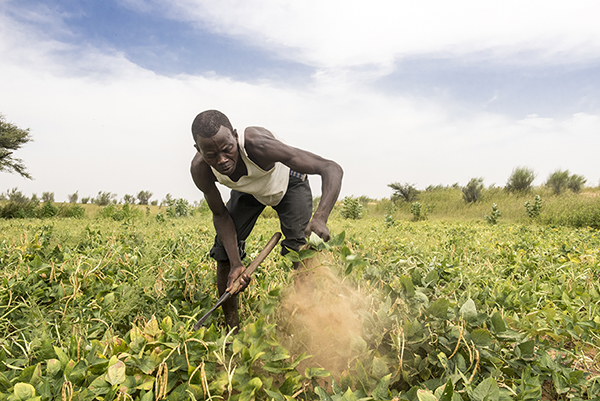 Adam Bassai works in his garden in Djetkoram village in the Diffa region of Niger. Photo by Michael Stulman/CRS

In the Diffa region of Niger, nearly half of the population—about 250,000 people—is displaced. Thousands live along Diffa’s only paved road, seeking safety from the convoys of military patrols.

Boko Haram’s presence has changed Diffa. In the last several years grain has not been grown widely for fear that the tall stalks of millet would hide Boko Haram militants. Motorcycles—the main mode of transportation—are forbidden because Boko Haram has used them to attack communities. And there is a strict curfew that prohibits all vehicles from circulating after sunset.

Most significantly, the massive influx of displaced people in Diffa has strained already scarce local resources.

“If you told 20 people to bring their food together, you wouldn’t even have [20 pounds],” says Masarma Brem, who arrived in the region 3 months ago. “When I came here, I had less than [7 pounds] of grains,” Masarma says, hardly enough to feed just one family for 2 days.

Like Moustapha, he slept under a tree until receiving shelter materials from CRS.

“I never imaged one day I would be in this situation, suffering like this,” says Masarma.

Informal settlements have formed and expanded rapidly, though they lack basic services such as clean water and sanitation.

To prevent outbreaks of waterborne diseases, CRS is constructing latrines and washrooms. With funding from Global Affairs Canada, in partnership with Caritas Canada, CRS has constructed more than 60 latrines and 60 showers.

Drinking water was a rare commodity in this region, which gets only 10 to 12 inches of rain a year, until CRS and other humanitarian organizations began building new wells, drilling boreholes and rehabilitating broken water points.

In June 2016, the numbers of displaced people grew too large for those water points, and it became necessary to truck in water. Every day for 2 months, CRS delivered almost 16,000 gallons of potable water in the Diffa region with support from the United Nations.

“We used to walk 3 hours to reach another village that has well water, but many people and animals contaminated it,” says Zeinaba Cherif, who arrived in the Diffa region 6 months ago.

“Now we always have water. We could even skip a day, and it wouldn’t be critical,” she says. “I used it to cook, drink, wash clothes and bathe my children.”

CRS is helping people not just survive the emergency, but also to grow and develop through it. With support from the U.S. Agency for International Development’s Office of Foreign Disaster Assistance, CRS is distributing seeds and tools for agricultural production, and cash in exchange for work on community projects.

“Last year we didn’t have any harvest,” explains Adam Bassai, who lives in Djetkoram village in the Diffa region. “The sand would come and cover our plants.”

Adam’s community is constructing barriers of dried plants along sand dunes to help prevent fertile land from turning into desert.

“We chose this work because with the plants, wind cannot enter our gardens. Even grass can grow and our animals can graze,” says Adam.

The cash they receive provides an injection of resources that allows recipients the freedom to decide how to meet their most pressing needs.

But even with this struggle, generosity is evident. People in Djetkoram village are sharing their harvests with displaced people.

“We divide the farming land with them,” says Adam. “People come with nothing. We are together like brothers.”

Much has been done to help those impacted by Boko Haram’s violence, but much more is needed. According to the United Nations, the regional response in 2016 remains significantly underfunded, less than one-third of the $739 million required.

“I wish the world knew it’s not easy to live like this,” Zeinaba says.

“Really," she adds quietly, “we have suffered.”

August recess is a key moment to meet with your members of Congress while they are out of session... END_OF_DOCUMENT_TOKEN_TO_BE_REPLACED

Use this calendar for key dates to reflect and take action with your community to address climate... END_OF_DOCUMENT_TOKEN_TO_BE_REPLACED