In central India, wild elephants come to isolated tribal villages in the early hours of the night. Tearing down the mud walls and thatched roofs, they eat the villagers' grain—and sometimes kill them.

Something else comes at night, too. Human traffickers—criminals who buy and sell human beings—drive to the villages. They quietly persuade residents, often teenage girls, to come with them. They promise good jobs in the big city, nice clothes and great salaries. 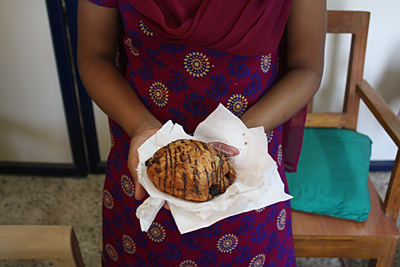 Nilofar (name changed), age 19, was sold by her cousin into a brothel. After escaping, she received catering training from a CRS partner and now works in a bakery. Photo by Laura Sheahen/CRS

Often the teenagers have already had to drop out of school. Unless there's work in the fields, there are no jobs and no future for them in their tiny villages.

So they go to the city. And sometimes they are never heard from again.

For years, the area of Chhattisgarh in India was the perfect target for human traffickers. Its rural, remote villages had little contact with the outside world. If a 16-year-old girl left to work as a maid in Delhi, India's capital, her parents could only assume she was okay. In villages where there is little electricity, low literacy and no computers, there was no way to check.

"We didn't know what was happening in the places they went," says a mother in the small village of Dhekhitoli. "We thought everything was going well."

But what seemed like a glamorous move to the big city often became a nightmare of abuse for the young people. Girls were sold into unpaid prostitution; teenage boys were brought to factories where they worked long hours for no money at all, only food.

"I went to Goa to find work," says 23-year-old Pramod. He eventually got work at a rice mill. "For the first few months, the mill owner didn't give me a penny." He stayed because he needed the food the mill provided. Eventually, he says, the owner paid him 800 rupees—$18—a month.

Younger children often receive offers to work in bead or embroidery factories. "Traffickers go to the parents and convince them to send their children to Delhi, telling them they'll get an education and a job that pays well," says Sangita Bhatia, a program manager for Catholic Relief Services in India. "They'll give a few hundred rupees to the parents to convince them that more is coming soon." But after the children are put to work in sweatshops, they and their families rarely receive any payment.

For teenage girls, the situation is even worse. Father William Urray, a priest in Chhattisgarh whose organization works to fight the buying and selling of people, talked with one trafficker who urged many girls to travel to Delhi. Father Urray says the trafficker, or agent, took 12 girls in one day, including one who was deaf and mute. According to Father Urray, the trafficker was paid 2,000 rupees ($45) for each girl he convinced to board the train to Delhi. Once the girls arrive in the city, they are sold into brothels and then must "work off" the money paid for them.

Father Urray and the staff of his organization, the Aasha Association for Human Advancement, began visiting the same villages traffickers targeted. With support from CRS and the U.S. Department of State, they started community vigilance groups that help track who is leaving the village and where they are going. Village leaders have a register—a book with names and whatever contact information is available. At least one village leader keeps a cheap cell phone that people can call if they're in a city and get in trouble. 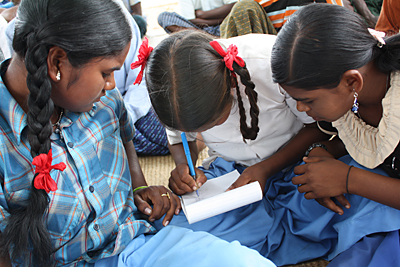 These 13-year-old girls were once dropouts. A CRS partner persuaded their parents to let them attend a bridge school to catch up on classes. They are now back in public school. Photo by Laura Sheahen/CRS

It's working. "The registers, to a great extent, check this evil practice," says Father Urray. Villagers also ask more questions about whether potential jobs are safe, and don't let underage children migrate. "Now we know," says an elderly farmer who is part of a vigilance group.

CRS' partner organizations also rescue children and young adults who have been tricked into slavery. The partners find out where children are being exploited, and then contact trustworthy police to organize raids. In Delhi, one CRS partner rescued more than 200 children who had been forced into work at a sari sweatshop; the youngest one was 7 years old. The children are returned to their parents, or are taken to shelters where they can get their lives back. In the cities of Mumbai and Hyderabad, other partners care for rescued women who had been sold into sex work and suffered enormous abuse.

For survivors starting over, or for young people who haven't been trafficked, education and job skills are crucial. CRS partners have set up schools and vocational training centers for those at greatest risk.

The schools provide flexible hours so children can help their families with farmwork during the day. "We were very poor and couldn't afford not to have someone look after the family," says Torson, the father of 13-year-old Jiwanti; she dropped out of school around age 10. "But the center was convenient—the schedule was a great help to us." So Jiwanti went to school in the mornings and evenings, and now wants to be a teacher. "In the minds of parents, something changed," says Father Gabriel Lakra, who oversees some of the school programs in Chhattisgarh.

"Keeping children from dropping out is so important," says Sachin Kumar, program support officer with CRS. "Trafficking, sweatshop victimization, bonded labor—it all starts with dropping out." 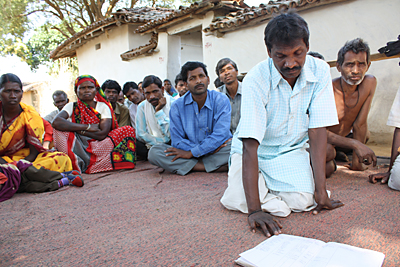 To curb human trafficking, residents of an isolated community in India keep a register of people who are leaving for big cities. Photo by Laura Sheahen/CRS

Teenagers who have finished school learn tailoring, auto repair and more. Pramod is learning to be a driver, along with many other village boys; dozens of girls attend sewing classes held behind Father Lakra's village church.

"My son is enrolled in the driving school," says a man from Dhekhitoli. "He can migrate because he'll know a skill."

Just as their children are more prepared for life, village parents are more prepared to act if trouble does threaten. "If an agent tries to come to our village, we will not let him," says a father in the village of Chhipnia.

In the tribal villages of Chhattisgarh, farmers band together and build fires at the corners of the villages to keep wild elephants away. In the same way, communities are banding together to keep away a predator that ruins far more lives—human traffickers. Now they know.

We seek daily renewal from the source of all life, and so we pray ... END_OF_DOCUMENT_TOKEN_TO_BE_REPLACED

Our walk with God is reflected in our walk with others, and so we pray ... END_OF_DOCUMENT_TOKEN_TO_BE_REPLACED