Farmer to Farmer: 'The Changes Were Momentous'

Editor’s Note: This article is a contribution to a week-long blog carnival on USAID’s John Ogonowski and Doug Bereuter Farmer-to-Farmer (F2F) Program. From July 14-18, F2F program partners and American volunteers are sharing their knowledge and experience of providing technical assistance to farmers, farm groups, agribusinesses, service providers, and other agriculture sector institutions in developing and transitional countries. This blog carnival aims to capture and share this program experience. You can find all contributions on Agrilinks. 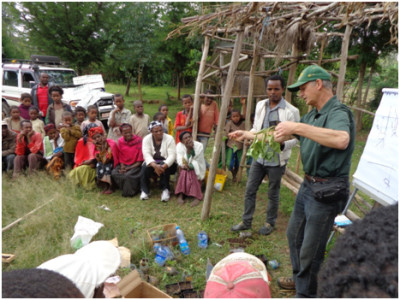 Dr. Hans Kandel trains villagers about dry bean nodulation. Copyright Hans Kandel, 2014. Used with permission.
The gains crops sector is the most important component of agriculture and food security in Ethiopia. Maize, teff, sorghum and wheat are the most widely cultivated grains—but lack of knowledge related to various farming techniques has seriously hurt the farmers’ ability to produce high yields of crops and sustain their livelihoods.

Indeed, population pressure and low levels of agricultural productivity are critical problems in Ethiopia and are among the major causes of food insecurity. Though Ethiopia is one of the largest grain producers in Africa, there are still pockets of food insecurity that threaten the livelihoods of smallholding farmers.

Dr. Hans, as the farmers called him, was able to step in and train farmers on how to increase the productivity of the grains, consequently augmenting farmers’ incomes and improving food security in the districts. The “farmers are hardworking but sometimes lack the knowledge to make appropriate changes,” said Kandel. In order to teach farmers how to make these changes, Kandel developed and led comprehensive training sessions, with an emphasis on hands-on learning and field demonstrations. The benefits of Kandel’s practical training cannot be overstated. Theoretical training often leads to doubts and confusions among farmers, said Tesfaye Tadesse, of the host organization SCS. “But Dr. Hans’ practical training was easy to understand and allowed the farmers to practice new farming techniques immediately.” One farmer shared a story with Tadesse that underscored how significant Kandel’s work was. “A farmer told me this was only the second time they had received practical training of this type in the last thirty to forty years,” said Tadesse. 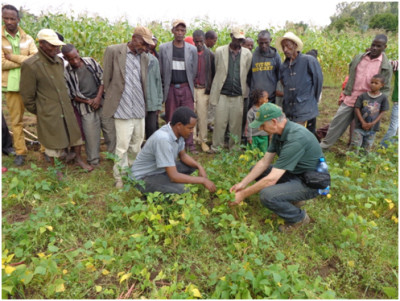 Kandel shows farmers the differences in the color of the dry bean plants. “Inoculation of the beans would be a simple solution to increase the productivity of the beans.” Copyright Hans Kandel, 2014. Used with permission.
Kandel taught trainings to over 275 participants, and also trained development workers so they could, in turn, use their newly acquired skills to train others. Tadesse spoke highly of the changes Kandel had already brought to the region, saying many of his initiatives had already been implemented to attain positive results. For example, Kandel brought a design for an improvement to a tool that significantly altered the way farmers were able to work. “What is special about Dr. Hans is that he brought a design for a row planter,” Tadesse commented. “The tool we had been using before had a very short handle. The farmers were expected to bend down while farming, which led to a lot of pain and farmers could not work as long because of fatigue. The design of Dr. Hans allowed farmers to work without bending and has decreased the tiredness of the farmers.”

When asked to sum up the results of Kandel’s trip, Tadesse concluded that “the changes were momentous.” The assignment was a learning experience for both the farmers and Kandel. Kandel noted that he “gained valuable knowledge” too. He added, “Ethiopia is a densely populated country with a number of under-utilized resources. I was impressed with the eagerness of the farmers to learn more and debate new options for their farming systems…[They] were very hospitable and it was a privilege to teach eager learners.” As aligned with Feed the Future, the U.S. Government’s global hunger and food security initiative, F2F works to support inclusive agriculture sector growth, facilitate private sector engagement in the agriculture sector, enhance development of local capacity and promote climate-smart development. Volunteer assignments address host-led priorities to expand economic growth that increases incomes and improves access to nutritious food. Read more articles on this topic on Agrilinks. Also, make sure to subscribe to receive a daily digest in your inbox, for one week only!

Also from This Series

“A Day in the Life of a Farmer-to-Farmer Volunteer“

“A Glimpse at a Typical First Week in the Life of a Farmer-to-Farmer Volunteer: A Personal Diary“