It’s early morning along the banks of the White Nile. Monica Akom Marol and the other women in her vegetable producer group are hard at work on their farm—watering, weeding and picking produce to sell at the market.

The farm is situated on fertile river land accessible only during South Sudan’s dry season and is divided into neat patches, with different vegetables planted on each parcel of land. 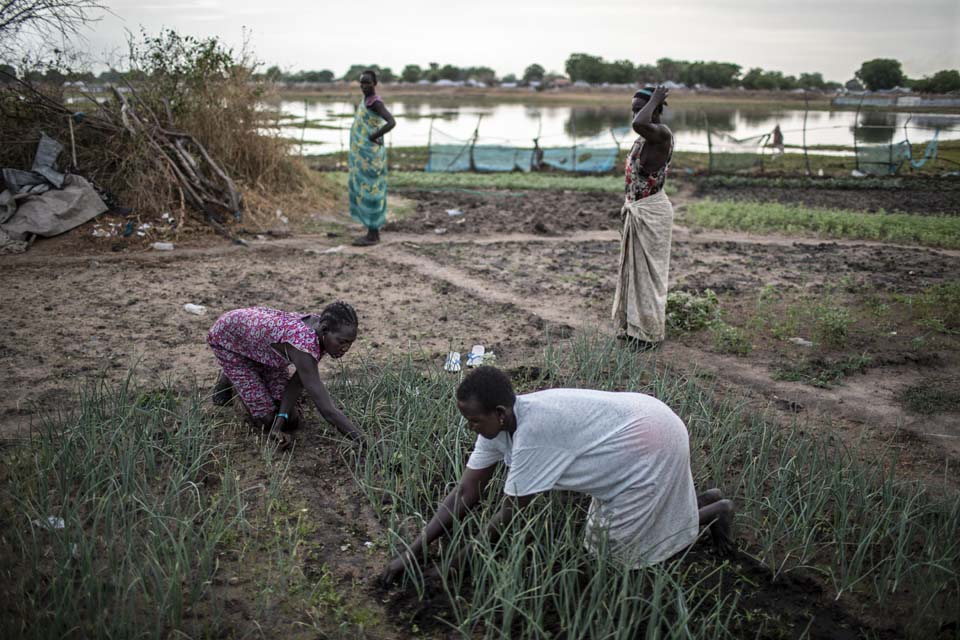 Monica Akom Marol, foreground, tends to vegetables on the farm of a vegetable producer group in Malou village, South Sudan. The group is receiving support and training through a CRS food security and livelihoods program that provides access to seeds, tools, agricultural extension services, and irrigation and planting techniques.

The group receives seeds, tools, and equipment, as well as training and technical assistance from Catholic Relief Services through the Resilience and Food Security Program, which covers six counties in Jonglei State and is funded by the U.S. Agency for International Development Office of Food for Peace. The program improves food security and helps conflict-affected communities build up resilience to shocks such as drought, flooding and conflict-driven crises. By promoting self-reliance within households and communities, the program also helps to reduce the expectation of, and dependence on, relief assistance.

Monica, a widow and mother of four, struggled before joining the group in 2012. But since then she says her economic situation has greatly improved. 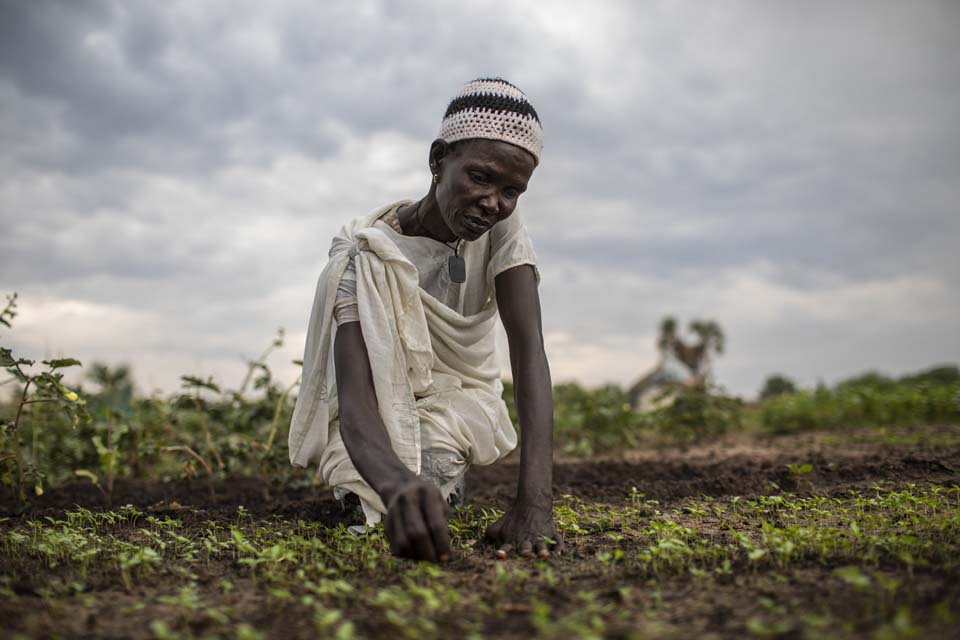 A woman tends to vegetables on the farm of a vegetable producer group that is part of a program helping communities reduce their expectation of, and dependence on, relief assistance by promoting community and household self-reliance.

“Life was miserable before. There was no money, no food. Even the food we had was not enough. I was not doing any kind of business then,” Monica says, adding that two of her other children died from lack of proper nutrition and access to health care.

Adding insult to injury, Monica’s houses were torched, and her cattle and goats taken when the civil war reached Bor, the state’s capital, in 2013. To escape, she crossed the Nile river and headed to Mingkaman, unable to return home until 2015.

Now, with the money she earns from growing vegetables, she has been able to rebuild her homestead, recover the livelihood assets lost during the 2013 civil war and put her children and grandchildren through school.

“The nutritional value of what we eat has also improved because we are getting vegetables to eat and to sell,” Monica says.

Monica’s group also has a rotational savings and loan system, an excellent example of a community-led system that amplifies people’s ability to invest or cope with shocks. The way it works is each of the group’s 20 members kicks in 2,000 South Sudanese pounds, just under $8, for the week and then the combined sum, totaling more than $145, is given to a single member to help them make key purchases, or pay expenses in an emergency. The next week the lump sum is given to a different person.

In a country where people in rural areas have little to no access to financial or savings institutions, chickens and goats serve as valuable assets and investments that can easily be cashed in as needed.

“We can eat the eggs, and I can sell a chicken to help pay school fees. I could also sell a goat to pay school fees if the money I make from selling a chicken is not enough,” Monica says. In December 2018, she sold 8 chickens for about $3 each.

Atoch Mawut Lat is a member of the same vegetable producer group.  She says being in the collective has bolstered her financial security and has helped keep her four young children in school. 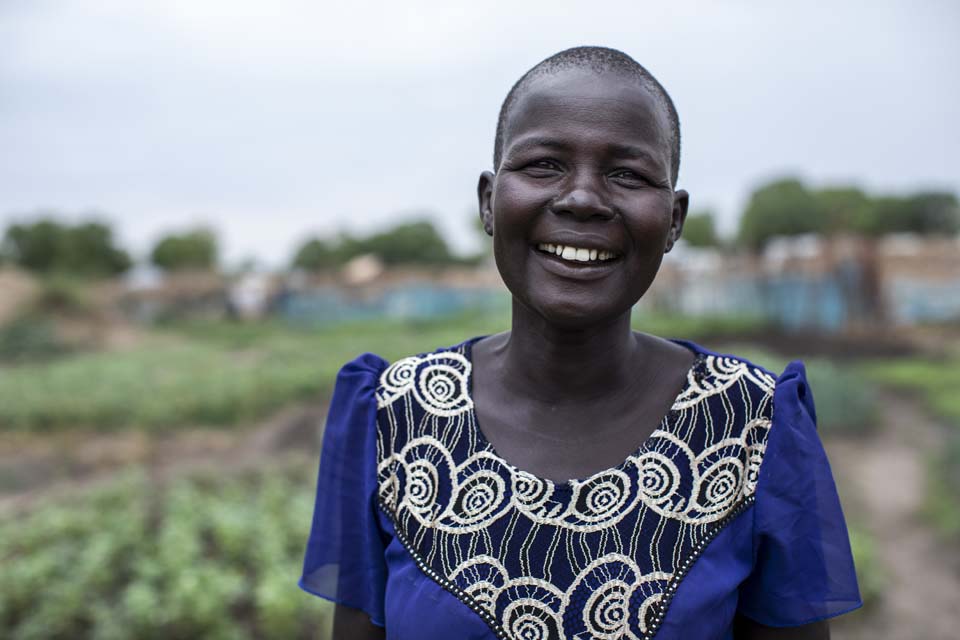 Atoch Mawut Lat on the farm of a vegetable producer group in Malou village, South Sudan. The group is part of a program that improves food security and builds resilience to drought, flooding and conflict-driven crises.

“Even though I cannot say that I am very strong economically, I am able to pay school fees and have food for my children, so there is improvement,” Atoch says. “I can also take children to the hospital when they are sick.”

“My small infant has to be taken to the hospital sometimes because the child gets sick easily,” Atoch says. “But now I can use the money from the rotational savings group to pay for health services and medication.”

There are currently 50 CRS-supported vegetable producer groups in Jonglei State, with 20 members per group. Members receive advice and mentoring from agriculture experts who teach them how to use irrigation and improved planting techniques to increase vegetable production. 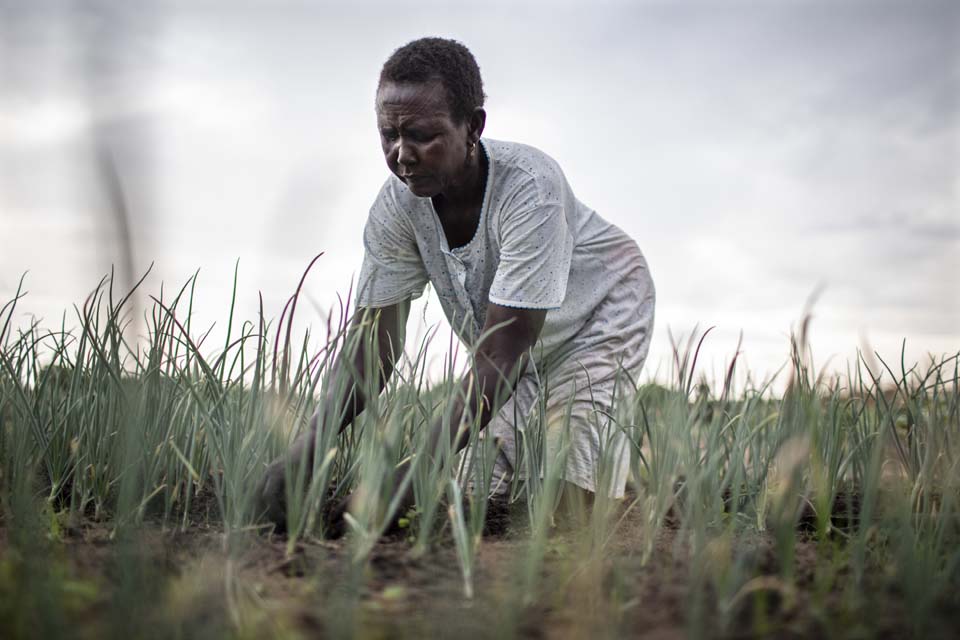 A woman tends to vegetables on the farm of a producer group in Malou village South Sudan. The group is receiving support and training through a CRS food security program that promotes self-reliance.

“The market is evergreen during the dry season. They grow cash crops like Jew’s mallow and okra, which fetch premium prices,” she says.

“We are building their capacity by providing advice, and we are training them on agronomy practices. For example, how to plant different types of vegetables, how to lay out the farm, weeding and the correct times for planting,” she says.

The groups are also supplied with small-scale irrigation systems, hoses, watering cans, digging tools, and assorted vegetable seeds for onions, tomatoes, okra, green peppers, eggplant, pumpkin and watermelon among others. The program also facilitates market linkages between buyers and the producer groups through open market days and other activities. 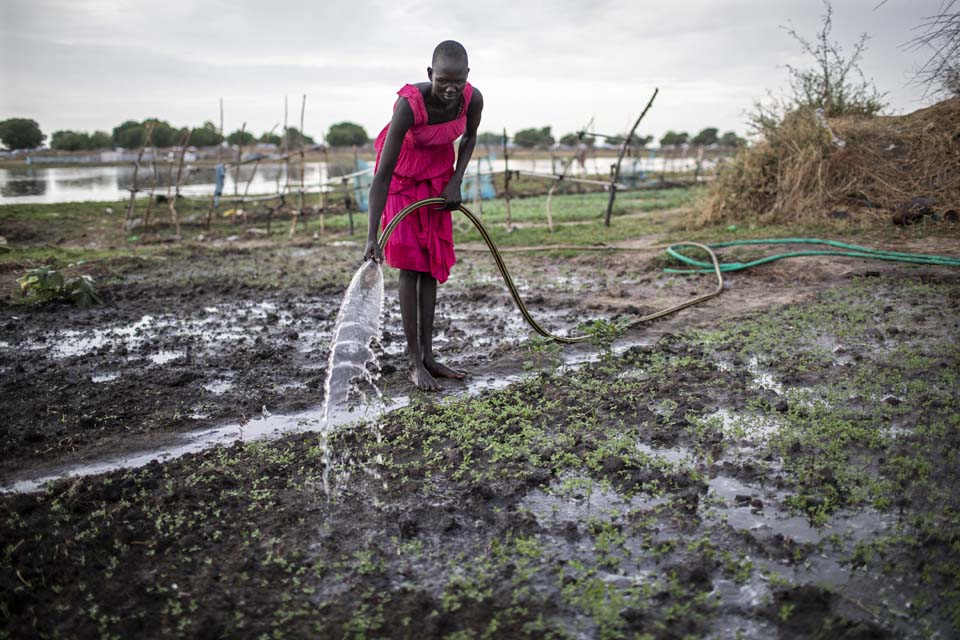 Deborah Ayak Maluk waters vegetables on the farm of a vegetable producer group in Malou village, South Sudan. The water is pumped from a nearby river using a treadle pump.

“You see their lives have changed compared to some years back,” Ayor says. “When they have more income, they have the power to set up their own small businesses such as small shops where they can sell goods. And they can even invest in goats and cattle.”

Investing in animals, having a steady income, and the ability to save and borrow have made a world of difference, according to Monica.

“My life has changed in terms of money. I have access to money. I am also saving specifically for emergencies. As I am saving, there is no problem in case anything happens,” she says.

August recess is a key moment to meet with your members of Congress while they are out of session... END_OF_DOCUMENT_TOKEN_TO_BE_REPLACED

Use this calendar for key dates to reflect and take action with your community to address climate... END_OF_DOCUMENT_TOKEN_TO_BE_REPLACED