Faith in God and Humanity

“All around the world, people are trying to live their lives in love, peace—and unite our families, separate, lost and buried on foreign soil.” 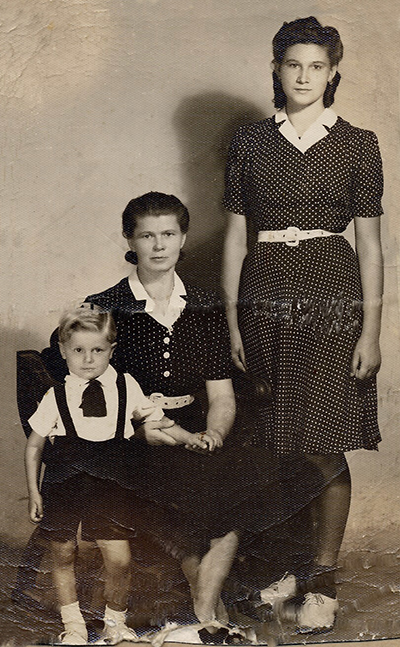 Julek Plowy, 77, is a storyteller. He speaks of a painful past, the character of a nation affected by war, and the quest for knowledge about life.

In 1940, Soviet troops expelled Julek’s family from Poland, sending them to the infamous Gulag camps in Siberia, where they lived for 2.5 years. His mother was 7 months pregnant with him when they arrived. He was born in confinement, in squalid conditions. His father later died of typhoid.

In January 1943, the Bishops of the United States established War Relief Services, now known as Catholic Relief Services. CRS’ first project helped Polish refugees who were resettled in Santa Rosa, Mexico. Julek was one of those 1,500 refugees. With his mother and sister, he arrived on November 3, 1943.

“Catholic Relief Services provided aid to us in many forms, such as clothing, food, education, toys, medical aid and also finances,” Julek says. “Beautiful dresses and other clothing collected in the United States were distributed to us. In many cases, it was too large for our emaciated bodies, but it was received with great appreciation. The refugees went to work remaking these precious pieces, donated with love.”

At times, the hatred, death and destruction families faced could test their faith in God and mankind. But Julek says this was ultimately met by love and generosity.

“Our hope and faith in God’s goodness was manifested by the effort on so many different fronts in our walk back to humanity, guided by Catholic Relief Services and their prayers,” Julek says. “The most important contribution to our family during our time in Santa Rosa was the full restoration of our faith in the goodness and love of God and humanity.”

Julek settled in the United States in 1947. He served in the Marine Corps and today lives in California. He has spent his life doing his part to preserve history.

“Many of us have never been embraced in the arms of our extended families. Many have never known our parents. So, some just live, and some write and some save what shreds of information we can find.”

Hear more from Julek on our podcast

We seek daily renewal from the source of all life, and so we pray ... END_OF_DOCUMENT_TOKEN_TO_BE_REPLACED

Our walk with God is reflected in our walk with others, and so we pray ... END_OF_DOCUMENT_TOKEN_TO_BE_REPLACED