In Ethiopia, Helping Mothers Feed Their Children During a Food Crisis

As the sun bears down on a small clinic in a remote area in Ethiopia, about a half dozen mothers—most carrying their infants strapped to their backs with colorful shawls—gather on the porch of one of the health center’s three rundown concrete buildings. Goats and sheep are milling about, kicking up the red dust.

The mothers and their babies settle down on two rows of wooden benches, and a young woman in her 20s walks up and greets them. Her name is Samia Abrahim, and she’s a health extension worker who also serves as a lactation consultant in this rural, remote district of Ethiopia’s eastern Oromia state.

Samia starts talking to the women, who listen intently, their eyes fixed on her. As word spreads about the training, more women walk up to the small porch and Samia waves them closer, gesturing for them to join the demonstration. 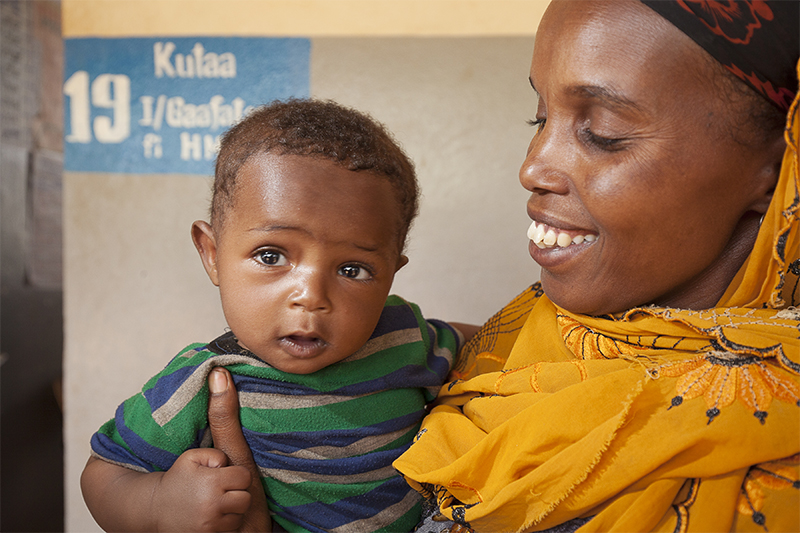 Kadija Abdelahi with her son, Amar Yusuf, 6 months. During worst drought in 50 years, Kadija has learned from a trained health worker the benefits of breastfeeding. Photo by Petterik Wiggers for CRS

She is talking about exclusive breastfeeding—giving infants only breast milk for the first 6 months—and sharing other lessons from a Catholic Relief Services program that trains community leaders on proper health practices and nutrition.

The art of breastfeeding

Samia approaches a woman in the first row, Kadija Abdelahi, who’s holding her 6-month-old son, Amar Yusuf. Samia bends down and shows Kadija how to position the baby for breastfeeding, making sure he latches on without causing the mother pain. When he does, Kadija smiles broadly as the baby begins to nurse. After Samia repositions Amar’s head, mother and baby are well on their way.

“This is quite different,” Kadija says. “I gave birth to my first four children not knowing anything. What I learned today is totally different from my experience.” As Amar, her fifth child, nurses quietly, she says, “I heard about exclusive breastfeeding but I didn’t know the technique or how often to nurse.”

Convening small groups like this is part of a CRS project called REAAP, which stands for Resilience through Enhanced Adaptation, Action Learning and Partnership. Funded by the U.S. government through the U.S. Agency for International Development, REAAP’s 3-year goal is to help half a million people most affected by Ethiopia’s recurring droughts learn new and better ways to cope with the devastating effects of climate change.

A big part of the effort is providing health and nutrition education. Health extension workers like Samia received training in exclusive breastfeeding, nutrition for children under age 5 and food preparation. They share their knowledge and promote healthy practices in their communities. 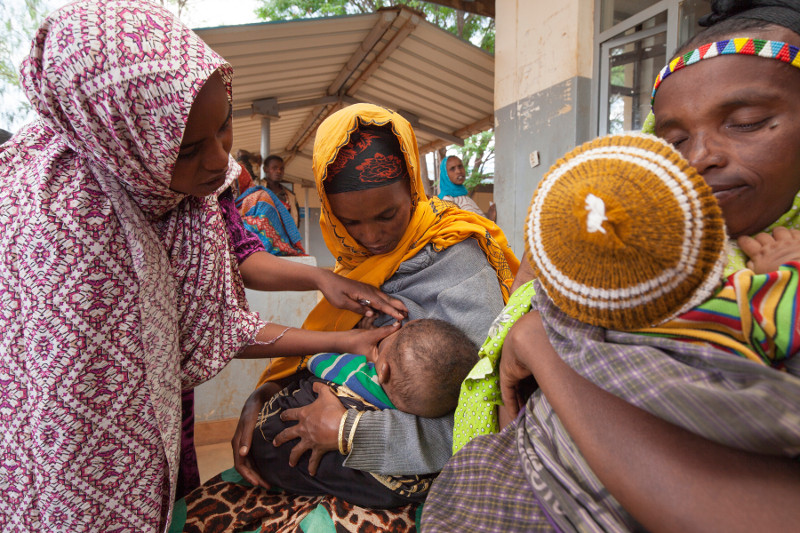 Samia Abrahim, standing, helps Kadija Abdelahi, her baby Amar Yusuf, and other mothers learn about nutrition and the benefits of breastfeeding. Photo by Petterik Wiggers for CRS

Ethiopia has made strides in child health. Child mortality rates declined from 71 per 1,000 live births in 2011 to 59 in 2015. Stunting—the failure of children to develop properly because of poor nutrition in their early years—has also been reduced. But 6% of children still die before they reach their fifth birthday. Teaching mothers and fathers how to provide the best nutrition for their children—even in the midst of drought—is an effort to reduce child mortality and malnutrition even more.

“We’re getting a lot of information,” Samia says about the training. “For example, how to feed a baby after birth, how to keep the breast clean, about the ‘first fluid’ coming from a mother’s breast and when to breastfeed.”

Samia knows that mothers here want to give their children the best care, but they don’t understand proper nutrition, which only begins with exclusive breastfeeding.

“Another challenge for mothers in our community is not knowing what to feed their babies after 6 months,” she says. “So here we’re learning about vegetables and carbohydrates, and how to prepare a nutritious porridge. There’s a drought, and a scarcity of wheat and corn, but some families’ goats still produce a little milk, and we use that milk to feed children.”

Many families can no longer use cow or goat milk to feed their older children as the animals, withering away or dying in Ethiopia’s worst drought in 50 years, no longer produce it. The lack of rain—for more than 2 years in some areas—has resulted in failed harvests and dangerous food shortages. More than 10 million Ethiopians don’t have enough to eat, so they depend on emergency food assistance. As another typically rainy season has been dry, that number could rise. The next rainy season is still months away.

“Sorghum should be growing right now, and corn should have two heads by now but doesn’t,” Samia says. 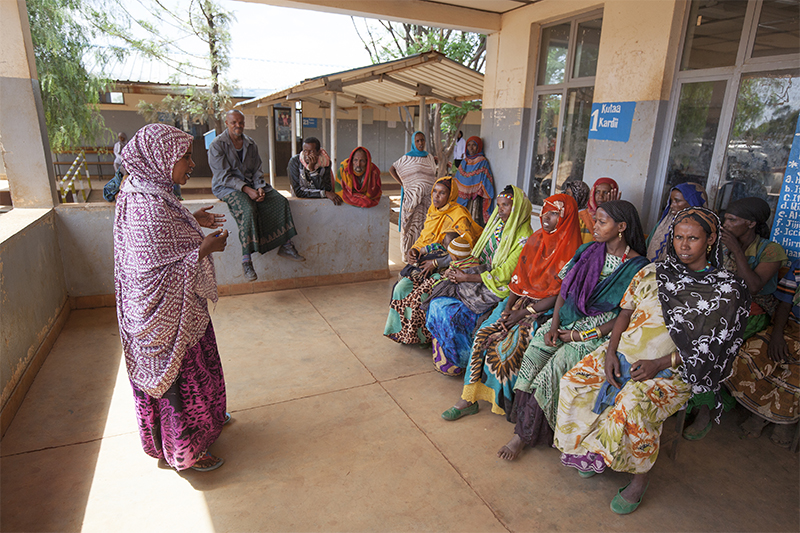 Samia Abrahim, a CRS-trained health worker, teaches a group of new mothers about the importance of exclusive breastfeeding and child nutrition. Photo by Petterik Wiggers for CRS

“The rain is unpredictable now but it will come later, and then we’ll intensify the promotion of what we’ve learned,” she says. “This knowledge is very important. We pass it on to the community and it will keep their children healthy, even if there’s no rain right now.

“This training has the potential to bring change to our community,” she adds. “We thank CRS for the training and promise to share our knowledge.”

“The breastfeeding demonstration was very helpful,” she says. “I will teach it to other mothers in my community.”

Read the latest update from CRS country programs and partners around the world as they respond to... END_OF_DOCUMENT_TOKEN_TO_BE_REPLACED

Read the latest two-page summary from CRS country programs and partners around the world as they... END_OF_DOCUMENT_TOKEN_TO_BE_REPLACED