“We’re trying our best to survive.”

“We eat only twice a day and it’s not enough. We always feel hungry,” he says.

A baby’s cry cuts through the heavy air in the room. Toshome’s wife rests behind a curtain that separates the sleeping area from the rest of the dark room. She gave birth to a boy just a day earlier.

Asrat Megste (right) receives monthly emergency food rations that she shares with her daughter, son-in-law and their newborn baby. CRS helps make monthly food rations available to 2.8 million people. Photo by Petterik Wiggers for CRS
“My wife has very little breast milk,” Toshome says. “I’m worried about the future of my family and my life.”

Toshome, whose stark features belie that he is only 32, is not alone.

Ethiopia is in the grip of its worst drought in 50 years. Some regions haven’t had rain in over 2 years. More than 10 million people are facing hunger and malnutrition, and depend on emergency food aid. That number is expected to grow following scant March rains. Most of the eastern half of the country is affected by the lack of rain.

Rivers and streams that once irrigated fields are now empty, and the rocky river beds blend into a bleak landscape of dusty red soil and rocks. The only green vegetation is invasive shrubs and cactuses. Vultures are common, as animal carcasses increasingly dot the landscape.

Women walk with yellow containers, and then kneel to collect what they can from small pools of brownish water.

Sitting opposite him on the bare concrete floor of his house, she explains that her life now depends entirely on food assistance. Her pronounced cheek and jaw bones show that she has lost a lot of weight. 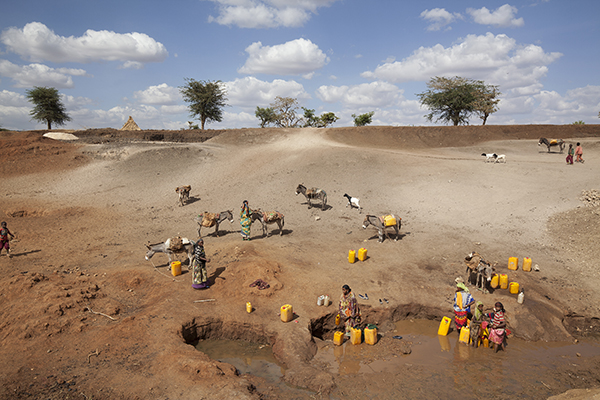 Women in Ethiopia’s Oromia state, where the worst drought in 50 years has left rivers and lakes completely dried out, are collecting what little water they can find. Photo by Petterik Wiggers for CRS
Working with local and international partners, CRS currently provides monthly food rations to more than 2.8 million people across Ethiopia. These cereals, beans, peas, lentils, oil and other rations help families survive amid the barren fields and withering livestock.

Many have opted to sell valuable livestock for low prices or have migrated to bigger cities in hopes of finding day labor. They have run out of other options for earning a living and have no money for food.

“It’s been a difficult year,” says Matt Davis, CRS Ethiopia country representative, who oversees the emergency response and a number of large-scale, long-term development programs there. “Because of Ethiopia’s location and elevation, climate change and a prolonged El Nino have caused widespread drought that dramatically impacts agricultural areas. Eighty-five percent of Ethiopia’s population depends on rain-fed agriculture, and many farmers haven’t had a harvest in almost 2 years.”

Ethiopia’s short rainy season has been disappointing. Some areas haven’t seen a drop of rain.

Families who have benefited from the CRS Development Food Assistance program offer a glimmer of hope. The 5-year project, generously funded by the American people through the U.S. Agency for International Development, offers food and cash payments in exchange for work on public infrastructure improvements. Participants receive training in entrepreneurship and personal financial management through Savings and Internal Lending Communities.

“Eight years ago, we couldn’t send our kids to school,” Isha says. “They used to walk barefoot. They ate breakfast but couldn’t eat lunch. We couldn’t buy them clothes, and we always had to wash the few clothes they had. Now I have a box of clothes and they can change whenever they want.”

She sits in a circle with the other women of her SILC group on dry, brown grass. “If there was rain, this area would be all green. You could even sleep on this grass,” Isha says with a laugh, eliciting a chuckle from the other women. But the mood quickly turns serious again, as the women talk about the challenges of this epic drought.

“If it wasn’t for this program, I’d be on the streets,” Isha says. “But instead, I’m sending my kids to school.”

“Just the fact that Ethiopia has developed, and communities have moved along with their own resilience in small business and livestock, they can manage to weather through,” Davis says. “But it’s still a big test for any community. We hope for better rain this year. The jury is still out, but we hope to have enough rain and a strong harvest, and that Ethiopia gets back on track again.”

The many fallow plots of land indicate that hope for rain is universal.

“We haven’t had rain for a year,” Isha says. “All we want is rain. Just pray for us that it will rain.”

Pray and reflect with your community on our call to respond to the needs of our sisters and... END_OF_DOCUMENT_TOKEN_TO_BE_REPLACED

Reflect on the impact climate change has had on our planet and pray for the Holy Spirit to change... END_OF_DOCUMENT_TOKEN_TO_BE_REPLACED

August recess is a key moment to meet with your members of Congress while they are out of session... END_OF_DOCUMENT_TOKEN_TO_BE_REPLACED