In Ethiopia, where millions depend on rain to grow crops to feed their families, even small variations in the climate can have devastating consequences. But work by Catholic Relief Services and our partners means that climate change does not have to lead to disaster. With the right programs and policies, even the most vulnerable Ethiopians can learn to adapt in ways that will ensure that they don't just survive, but thrive. 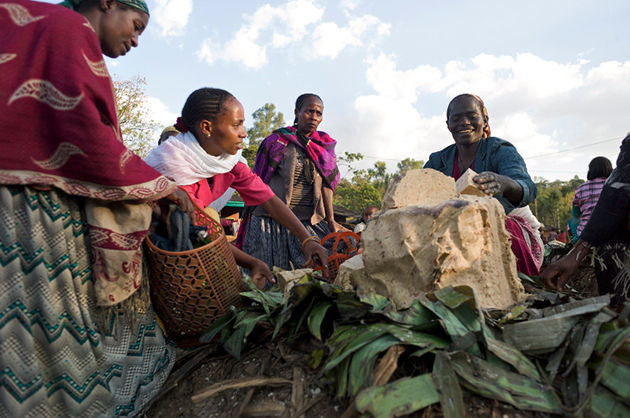 Using the profits from her business, SILC member Ms. Gocha she has been able to purchase sheep and clothing for her family, build a house and pay her daily expenses, including schools fees. Photo by Ric Francis for CRS
Water is, of course, fundamental to any climate change initiative in Ethiopia-it is a constant need and worry for many regions of the country. A small blip in rainfall patterns can mean thousands of hungry people. So CRS works to ensure that people have access to a clean, consistent water supply.

That is certainly the case in Alelugessela, a small village south of Addis Ababa reached by taking a very bumpy path from the paved road. There, working with the local Catholic diocese of Meki, CRS organized a water committee that built a pipeline connecting a well a few miles away to a water facility in the village.

Father Temesgen Kebede runs the Catholic Secretariat, the social outreach arm of the Church, in the Diocese of Meki. He has seen firsthand what happens when these wells provide water to a community that used to walk miles to haul water from sources that were often unreliable during dry seasons.

"For some, this water was a miracle," says Father Temesgen. "You see a 75-year-old person and show him how to open the tap. He has never gotten water that way."

At the opening of one such well, a woman delighted to see the water flow was asked about the people who had drilled the well.

"They call themselves Catholics," she said. It was obvious that this was a strange word to her."I'm not sure exactly what that means, but we give thanks to God for their work." 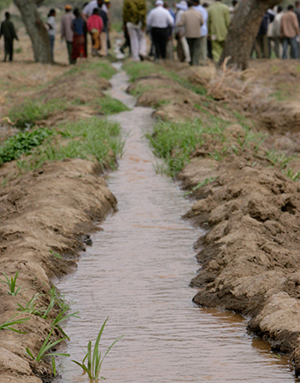 In the community of Dire Kiltu, in the Meki diocese, residents dug terraces that hold in the rain when it does come, raising the water table. Photo by Jim Stipe/CRS
In addition to working with the community to establish a local well and water committee, CRS and the local Church also established savings clubs and innovative outhouses. At first glance, setting up savings clubs and building outhouses may not seem connected to climate change-but they are. A savings club-Savings and Internal Lending Committee, or SILC-is a hedge against droughts, storms and other severe weather patterns. If people have money, either from savings or from starting a small business with loans from the SILC, they can buy food when harvests fail because of erratic rainfall. Outhouses known as "Arborloos" are small privies equipped with a hand-washing station. When they are full, a fruit tree is planted on the fertile compost and a new Arborloo is dug. The tree's produce adds nutritional value to a family's diet and can be sold for income. Other programs fight erosion and capture water to make arid land fertile once again.

You can find such work all over Ethiopia. Some involves the basic, lifesaving act of getting food to people when they don't have enough. The work of the Church in Ethiopia combines innovative programming that helps communities recover from drought, create new income, build up savings and plan for the future. 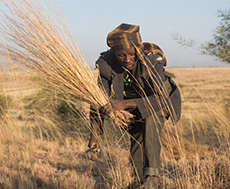 A Dire Kiltu community member cuts grass to sell for roofing and livestock feed in one of the areas protected from livestock feeding and crop harvesting. Photo by Sara A. Fajardo/CRS

With the help of CRS and the Ethiopia Catholic Church-Social and Development Coordinating Office of Meki, the community has protected large swaths of grassland to offset deforestation and land degradation. Trenches were dug to slow soil erosion, trees were planted to provide shade, block winds and filter rain into the ground, and the enclosure was made off limits to livestock grazing. The land now provides jobs cutting and selling grass for roofing to around 100 people. Soil erosion has diminished and wildlife has begun to return to the area. The livestock is fed with the grasses when the dry seasons hit.

Watch the Video:
"Ethiopia Improving the Land to End Hunger"

The Water for Life video illustrates the work of Catholic Relief Services in partnership with the... END_OF_DOCUMENT_TOKEN_TO_BE_REPLACED

An activity that requires participants to carry water, joining them in solidarity with people who... END_OF_DOCUMENT_TOKEN_TO_BE_REPLACED