Ethiopia Drought Crisis by the Numbers

As many as 15 million people may need food aid by the end of this year. Of those, 400,000 children will need food rations to prevent stunting, developmental damage and death from hunger. Projected livestock losses number in the hundreds of thousands. Their herds and flocks represent many Ethiopians’ last resources for food and income. 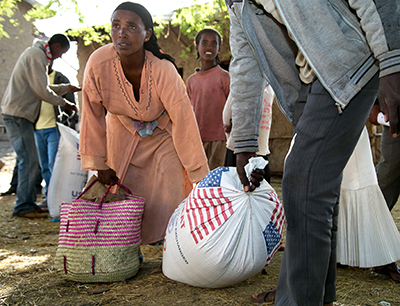 CRS is providing emergency food assistance to some of the most vulnerable Ethiopians. In Aje, families gather to take home rations of wheat and split yellow peas. Photo by Nancy McNally/CRS

At least 1.8 million Ethiopians will be without potable water for extended periods of time.

International aid agencies and the Ethiopian government need another $500 million to ensure that supply lines keep flowing after July, when current resources are expected to be exhausted. The U.S. government, through USAID’s offices for Food for Peace and Foreign Disaster Assistance, has been a generous partner, offering funding meant to be used later in the year to fill current gaps. It’s working closely with the government of Ethiopia, the U.N. World Food Program and a consortium of development agencies led by Catholic Relief Services.

Since 2015, the U.S. government has contributed more than $200 million to supply water and food to Ethiopia’s most vulnerable people. In all, U.S. assistance for this crisis tops $500 million.

Yet funding for the emergency response is less than half, or 46%, of what’s needed, while the number of people who rely on emergency food aid grows. About $1.4 billion is needed for the humanitarian response in 2016.

CRS is calling upon the international donor community—beyond the steady and generous support of the U.S. government—to rally to provide more emergency assistance in Ethiopia. While it’s a disaster of potentially tsunami-like proportions, there has been ample warning of the crisis. Disaster can be averted.

How you can help

CRS is currently supporting more than 2.6 million people by supplying regular rations such as split yellow peas, sorghum or wheat flour, and vegetable oil to those most in need. With the El Nino expected to last for months, CRS may need to expand assistance to 3 million people. 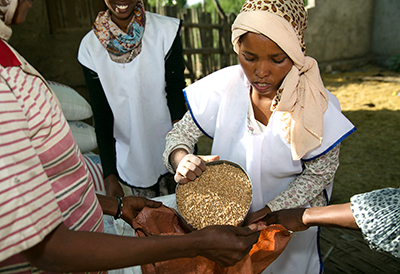 Ethiopia is facing its worst drought in 50 years. The devastating lack of water could last for much of 2016. Photo by Nancy McNally/CRS

Here's how your donation can make a difference*:

$5: a month’s supply of protein and nutritious corn-soy supplements for pregnant and nursing mothers, and children under 5

$10: monthly ration of wheat or sorghum, beans, and cooking oil for one person

Your Help is Urgently Needed

August recess is a key moment to meet with your members of Congress while they are out of session... END_OF_DOCUMENT_TOKEN_TO_BE_REPLACED

Use this calendar for key dates to reflect and take action with your community to address climate... END_OF_DOCUMENT_TOKEN_TO_BE_REPLACED