Shettima Babaari knew what the sounds of motorcycle engines roaring in the distance meant. Boko Haram was about to attack his village. He had just enough time to escape with his family of nine.

“They burned our community into ashes,” he says. “My family survived by hiding in tall grass during the day and moving by foot at night.” 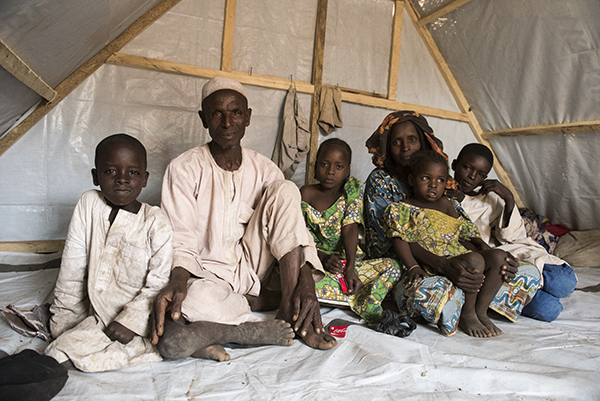 Shettima Babaari and his family live in a transitional shelter provided by CRS after they escaped Boko Haram’s violence in Nigeria. Photo by Michael Stulman/CRS

Shettima’s family fled to Maiduguri, the capital of Borno state that was the commercial hub of northeast Nigeria until 2009, when Boko Haram escalated attacks on police stations and other government buildings.

Today, as better security means Boko Haram is mostly banished, the population of Maiduguri has doubled from 1 million to 2 million. Like Shettima and his family, as much as half the population has fled violence in other areas.

Catholic Relief Services has established an office in the city to expand our humanitarian response. We’re helping meet the basic needs of those forced to flee and supporting people so they can rebuild their lives and livelihoods.

Running from terror, arriving in poverty

Shettima and his family have lived in Maiduguri for 2 years and, like so many others there, they still bear the heavy weight of poverty and hunger.

“What are we going to do?” he asks, remembering his previous wealth. “We had over 100 cows at home.”

But Shettima isn’t completely devoid of hope. He raises a red plastic card to his chest.

“This card is very important in my life,” he says.

It’s an electronic voucher distributed by CRS. With support from USAID's offices of U.S. Foreign Disaster Assistance and Food for Peace, Shettima can use the card to purchase locally available food, household supplies, firewood and other critical supplies.

To date, CRS has distributed more than 8,500 cards to those forced to flee by Boko Haram.

They arrive in Maiduguri with few possessions, but with very heavy invisible baggage—trauma from Boko Haram’s violence.

The help they get from CRS does not remove that burden, but makes it lighter, letting them know that people care; that hope is alive. 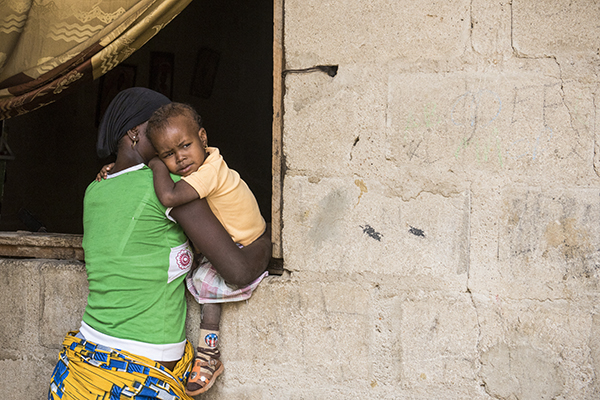 “They would have slaughtered all of us,” says Fatima Chari Mallam, who walked for 3 nights to reach Maiduguri. “On the way, Boko Haram shot at us, and my son was killed.”

She looks at her few possessions. “All these things were given to me: food, shelter, blankets.”

Modu Kyari’s home was burned down.

“You can't describe Boko Haram as human,” he says. “They only think of killing people—men, women and children.”

Now he too has a red card.

“It wouldn't be easy without the card. We would go all day hungry and go to sleep hungry. Now we eat three times a day.”

Local families do what they can. In Maiduguri, they are opening their doors and offering land for shelter and food, but the influx of displaced people has strained the community’s limited infrastructure, affecting access to water, hygiene and sanitation.

Boko Haram is not just a Nigerian problem

In Maiduguri, Nigeria, Fatima Chari Mallam uses a debit card distributed by CRS to purchase food and household supplies in local markets. Photo by Michael Stulman/CRS
Although Nigeria is bearing the brunt of the crisis, Boko Haram has been launching violent attacks in Niger, Chad and Cameroon too—planting bombs in public places, abducting women and girls, forcefully conscripting young men and boys, and destroying villages and towns.

CRS is working in all four countries, where attacks have displaced millions of people.

Poverty and inequality helped give rise to Boko Haram in Nigeria. Although its name roughly translates to “Western education is forbidden,” its objective has been to overthrow governments and create an Islamic state in Nigeria and beyond.

“The scale and urgency of these neglected needs demands a serious, engaged and holistic response,” says Scott Campbell, CRS regional director for Central Africa. “A longer term, comprehensive response is critical to meet people’s needs, from relief to recovery.”

CRS is addressing both the emergency and long-term needs of these vulnerable people.

Still, there are urgent unmet needs. While aid will help people survive, there’s much more to do if they are going to earn an income and become self-sufficient.

“In the village, we had no problems,” says Shettima. “Now, even with the card, a livelihood is still a very big challenge. We are just managing. But if not for CRS, I don't think we would be alive.”

HELP WHERE IT’S NEEDED MOST >

Read the latest update from CRS country programs and partners around the world as they respond to... END_OF_DOCUMENT_TOKEN_TO_BE_REPLACED

Read the latest two-page summary from CRS country programs and partners around the world as they... END_OF_DOCUMENT_TOKEN_TO_BE_REPLACED