Photo by Mohamed Reefi for CRS

“The e-voucher will help me meet the needs of my children and grandchildren.”

Nawal Abu Thaher, a widowed mother in South Gaza, was desperate. She didn’t have enough food to feed her children and grandchildren and she was running out of other basic household needs. With few resources, Nawal often had to buy groceries on credit. 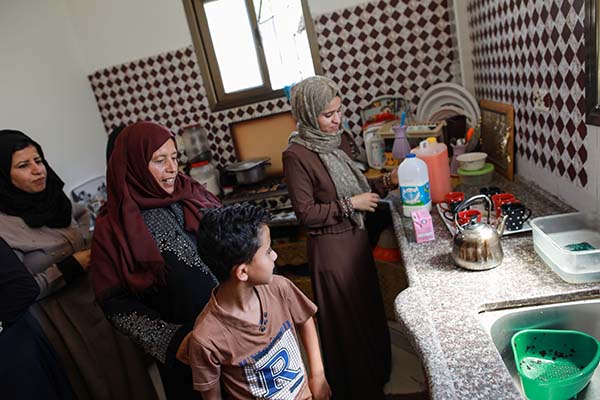 Nawal and her daughters show some of the food items they bought through the e-voucher program. Photo by Mohamed Reefi for CRS

“We used to ask the grocery store owner to give us food and promised to pay him back once we get money,” Nawal says.

Then, Nawal received a text message from Catholic Relief Services telling her she had been selected to benefit from their electronic voucher program. CRS’ e-voucher card allows people like Nawal to purchase food, hygiene and living supplies in times of crisis.

Like many people in Gaza, Nawal’s family has been significantly affected by the 2008 conflict. Her home  was destroyed, and her son was arrested by Israeli forces. When her husband died six years ago, Nawal became responsible for securing food and other basic needs for 14 members of her extended family. Medical issues compounded the family’s already precarious situation. As a result of these challenges, Nawal’s family survives on humanitarian assistance alone.  Nawal receives only three bags of flour every three months, which “is not enough to feed this big family,” she says.

As a part of the CRS e-voucher project, Nawal’s family will receive $120 on a monthly basis for at least three months to buy food and non-food items from any one of 15 local supermarkets contracted by CRS.

“I feel relaxed, we don’t have to borrow food from anyone for at least three months,” Nawal’s son Sabri says.

You can help families in Gaza

Read the latest update from CRS country programs and partners around the world as they respond to... END_OF_DOCUMENT_TOKEN_TO_BE_REPLACED

Read the latest two-page summary from CRS country programs and partners around the world as they... END_OF_DOCUMENT_TOKEN_TO_BE_REPLACED