Qula Massaquoi’s son, Bobor, was her sole provider. Bobor was a self-made businessman who traveled throughout the Eastern Province of Sierra Leone and bought cacao, palm oil, coffee and nuts from small farmers. The farmers loved him, saying Bobor was hardworking, intelligent and respectful. He sold the products to exporters in Kenema, where he lived with his wife and children. They were building a new house. 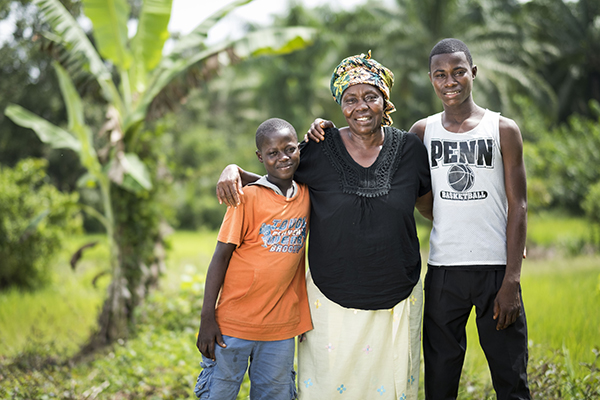 Qula Massaquoi lost her son, daughter-in-law and four grandchildren to Ebola. Her son's two surviving children are now living with her, in addition to five other grandchildren. Photo by Elie Gardner for CRS

In August 2014, just a few months before the Ebola virus epidemic spread to Sierra Leone, Bobor fell ill and was taken by ambulance to the hospital in Kenema. Not long after, he died.

Hundreds of people gathered outside Qula’s home in Boajibu to mourn with her. To stop the spread of the disease, however, restrictions were placed on crowd sizes and movement throughout the country. Police quickly came to disperse the people outside Qula’s home. She wasn’t able to travel the 2 hours to Kenema to see her son one last time.

“I never set eyes on my son’s body,” Qula said. “There was no funeral.”

Bobor’s wife and four of his children also contracted the disease and died. But, after a 3-month quarantine, Bobor’s 10- and 14-year-old sons were declared Ebola-free. Qula couldn’t believe they had survived. She took them in.

While the Ebola epidemic directly impacted Qula’s family, hundreds of others in her village were indirectly impacted. Agricultural production halted, and the economy suffered. The price of staple foods skyrocketed, and people throughout the country struggled to feed themselves.

In late 2015, the U.S. Agency for International Development’s Food for Peace program partnered with Catholic Relief Services and four other international aid organizations already working in Sierra Leone: Save the Children, World Vision, CARE International and ACDI/VOCA. The goal was to combat hunger. While USAID had distributed food during earlier stages of the Ebola emergency, cash was deemed the best option in this later recovery phase. Markets were slowly recovering, but people didn’t have money for food.

Together, the 5 agencies distributed $90 quarterly to 364,000 recipients, including Qula, says Lovetta Sannoh, a food security monitor for USAID. The program reached very remote areas, where no other help was reaching, to serve the most vulnerable communities. Without cash for food, Sannoh believes violence and migration would have increased, and ultimately lives would have been lost. 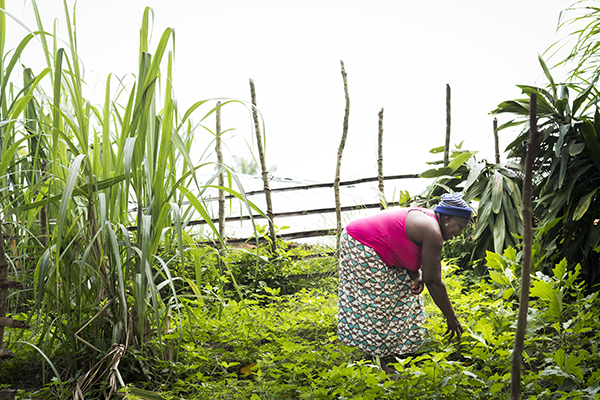 Marie Massaquoi works with her sister, Qula, in Qula’s backyard garden. After training from CRS, the garden is producing higher yields and diversifying the family’s diet. Photo by Elie Gardner for CRS

The 5 organizations met weekly in Freetown to exchange lessons learned. For example, World Vision made recommendations about how to manage the distributions peacefully by setting up barriers, promoting crowd control and involving community leaders. CRS implemented their advice from the start.

“We don’t see competition among our partners,” Sannoh says. “They just work as one. They have such unity, and this is something that others can follow.”

Ahmed Tejan Jalloh, a politician and leader in Boajibu, says the entire community has been impacted by the project, not just participants like Qula. Jalloh says he felt the weight of his hungry constituents upon him, but didn’t have the resources to solve the problem alone.

The day CRS issued the first cash payments in Boajibu, Jalloh says there was a shortage of rice in town because everyone stocked up. He estimates 70% of the cash was spent on food. This figure is consistent with estimates countrywide. Families then prioritized their individual needs with their remaining cash. Many used it for school fees, others for medication and seeds.

While all 5 organizations distributed the same amount of cash, each offered a distinct set of complimentary activities. CRS held local workshops teaching agriculture, financial management, and health and nutrition lessons to village leaders. These leaders—known as lead farmers and peer educators—then took the wisdom back to their communities. The result: hundreds of self-organized savings groups, lush backyard gardens, hand-washing stations in front of almost every home, more diverse diets and group farms. 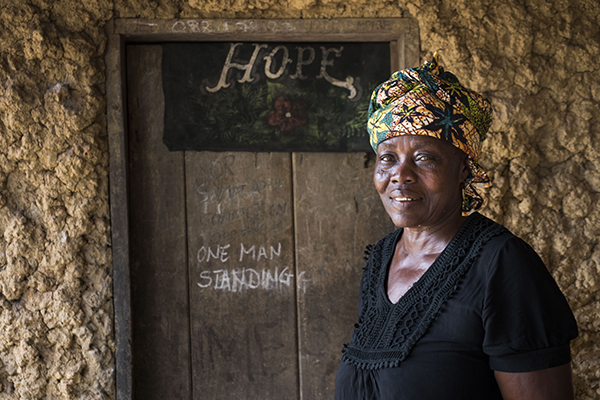 Qula has several robust gardens in her backyard and is cultivating oranges, papaya, sugar cane, coconut, potato leaf and more. She also has a farm nearby with banana and rice that she farms with other program participants. Photo by Elie Gardner for CRS

In the district of Kenema, moderate to severe hunger has been reduced by 40% in target households since the program began. Fresh snap peas grow in one of Qula’s backyard gardens. Trees loaded with oranges grow next to a tall papaya tree. She cultivates banana and rice on another, larger plot of land, just a 5-minute walk from her home.

“The program was designed to provide food, but it went beyond and is now leaving something with the government,” Sannoh says.

Together, USAID’s Food for Peace program and NaCSA have provided unconditional cash transfers to 491,301 households across Sierra Leone.

A worn piece of black fabric hangs from a doorframe in Qula’s home. It’s decorated with a painted red flower and the word “HOPE.”

“Hope is why I’m alive today,” Qula says. “Where there is life, there must be hope.”

We seek daily renewal from the source of all life, and so we pray ... END_OF_DOCUMENT_TOKEN_TO_BE_REPLACED

Our walk with God is reflected in our walk with others, and so we pray ... END_OF_DOCUMENT_TOKEN_TO_BE_REPLACED