Fatmata Amara rolls balls of sticky dough in her hands and drops them one-by-one into bubbling, hot oil in Kokoru, Sierra Leone. Children gather around to watch, but the frying dough seems to draw their attention more than Fatmata. As she works, her father comes around the corner. “This is our Iron Woman!” he says. “She does everything for herself.” 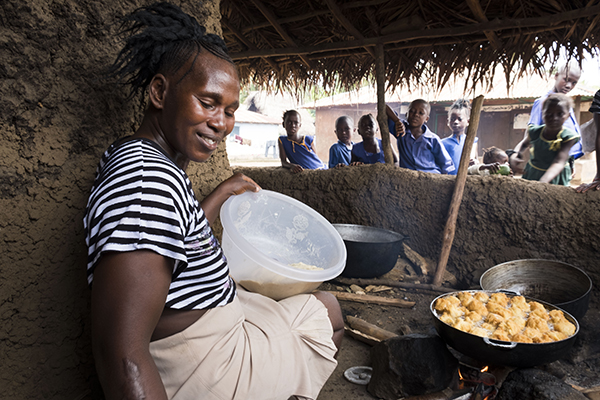 Fatmata Amara fries small cakes to sell in her shop in Kokoru, Sierra Leone. Photo by Elie Gardner for CRS

But during the peak of the Ebola outbreak in the country, Fatmata felt powerless. More than 17,500 people were infected. Fatmata and her four kids were quarantined in their home for a month. Their routine consisted of sleeping and eating rice and cassava—when they were fortunate enough to have it.

Located in the district of Kenema, Kokoru is in an area known for its rice and cash crops. Before the epidemic, Fatmata supported her family as a day laborer, showing up at farms to weed or harvest crops and earning a bit less than $1 a day.

Then the district’s economy was crippled during the Ebola outbreak. Many markets were suspended or made inaccessible by restrictions on travel and group labor. Food prices increased substantially—in some cases, by as much as 50 to 100%. This, paired with rapid inflation, left many families at great risk of hunger.

After the virus was contained, Fatmata imagined owning her own business rather than returning to the fields, but without capital to invest, her idea remained a dream.

In late 2015, the U.S. Agency for International Development’s Food for Peace program partnered with Catholic Relief Services and four additional humanitarian organizations to reduce hunger in the aftermath of the Ebola outbreak. Fatmata was one of the program’s participants. 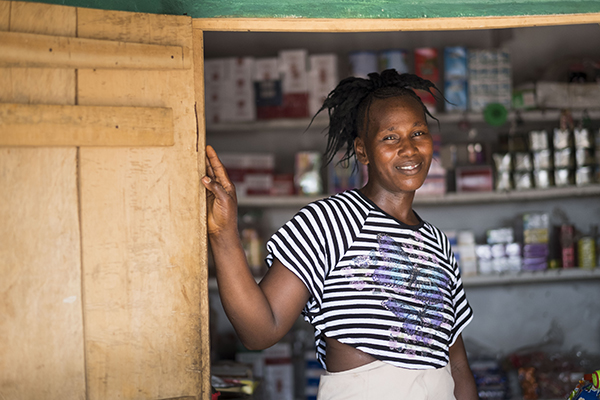 Through an Ebola recovery project, Fatmata received 3 payments of about $90 each from CRS in 2016. Photo by Elie Gardner for CRS

Every 3 months, the program puts cash directly into the hands of those most affected by Ebola, distributing $90 to each program participant. Francis Kyobe, CRS’ food security program manager, says that in situations like the crisis brought on by Ebola, cash is the best, fastest solution to kickstart the economy and reach people in need. Since its inception, CRS has distributed cash to 9,689 households in 9 chiefdoms of Kenema.

In early 2016, Fatmata received her first $90 payment and started selling salt, bouillon cubes and pepper from a small wooden table in the center of her village. Receiving cash gave Fatmata the freedom to spend it according to her needs. Kyobe says program participants typically spend 70% of their cash on food.

Three months later, when the second cash payment came from CRS, Fatmata traveled 2 hours to Kenema on the back of a motorcycle to meet with a business owner about increasing and diversifying her inventory.

Then, with the help of her family, she constructed a brick and mortar shop. It’s painted yellow and green with double wooden doors. It is the only shop in the village selling staples such as rice, flour, sweets, drinks and even gasoline. Fatmata is earning more income while at the same time giving her fellow villagers easier access to products they need.

In addition to cash payments, CRS helped train hundreds of village leaders in financial management, agriculture, nutrition and hygiene. The leaders—known as peer educators and lead farmers—then took the knowledge back to their communities. After speaking with one of these leaders in Kokoru, Fatmata decided to join a community-based savings group with about 10 others villagers. Her savings group meets monthly. Districtwide, 5,250 people belong to similar savings groups, including people who are not participants of the Food for Peace program. 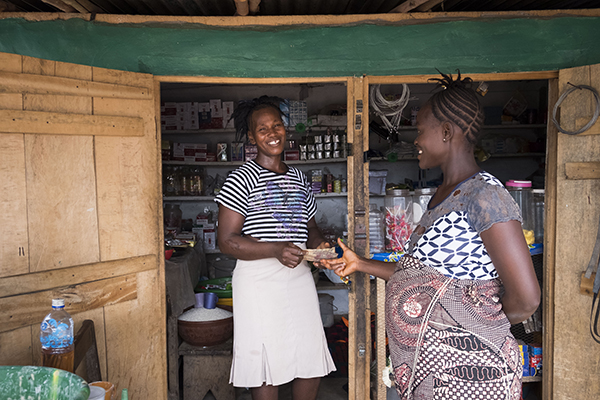 Fatmata’s shop is the only one in Kokoru that sells staples like rice, flour and gasoline. Photo by Elie Gardner for CRS

As her business grows, Fatmata says she and her family are also eating better. She recalls that less than a year ago, when she cooked, the food would have to last the family 2 or 3 days. Now she’s cooking daily and has access to more than rice and cassava. Fatmata, like many people in her village, now harvests taro, yam, papaya and potato leaf right from her backyard garden. Moderate to severe hunger in the district has decreased 40%, and more than half of the households are now eating 3 meals a day.

Fatmata has also used the cash to send three of her four children to high school in Kenema. The fourth is still studying in Kokoru and helping her at the shop.

Kyobe says a key success of the program is the way its complementary activities have built on existing knowledge and practices. For example, savings and lending groups have been around for a long time, known throughout Africa as “susu.” Culturally, group work is accepted, and farming is second nature for most people living in rural Sierra Leone.

“In the wake of the tragedies Ebola has caused,” Kyobe says, “the resiliency of the community has meant people are working harder than ever to improve their lives.”

He believes that after the program ends, communities will continue the practices put in place by the project. He says people are driven to protect themselves from future shocks and become more self-sustained because they have seen the benefits.

Fatmata received her last CRS payment in late 2016, and a year later, the shop is still going strong. Many were skeptical that her business would last for more than a few months. And her dad isn’t her only admirer; Fatmata says that through her business, she has earned respect from others in the community.

Fatmata’s dough cakes start to turn golden brown, and she spoons them out of the skillet, wrapping them in clean sheets of paper. A customer holds a worn bill—worth about six and a half cents. She presses it into Fatmata’s hand, as Fatmata passes her the hot cakes. Fatmata slides the cash into her pocket. She beams.

August recess is a key moment to meet with your members of Congress while they are out of session... END_OF_DOCUMENT_TOKEN_TO_BE_REPLACED

Use this calendar for key dates to reflect and take action with your community to address climate... END_OF_DOCUMENT_TOKEN_TO_BE_REPLACED