Catholic Relief Services is continuing our ramped-up response to the deadly Ebola outbreak in West Africa by capitalizing on our long history in the region, and our broad community and Church networks.

The Ebola outbreak, which began last March, has killed more than 6,000 people. The World Health Organization predicts that transmission of the Ebola virus will continue for at least 9 more months, making a continued and robust emergency response critical to containing the outbreak. The crisis has already done wide-ranging damage, setting the affected countries' development progress back by at least a decade.

While reports indicate that the outbreak may be slowing in two of the three affected countries—Guinea and Liberia—Sierra Leone is experiencing an increase in the number of new infections. 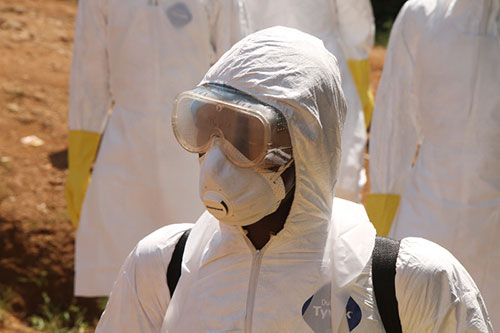 A burial team member in Kabala, Sierra Leone, where CRS is supporting the safe and dignified burials of Ebola victims. Photo by Donal Reilly/CRS
CRS has committed more than $9 million to respond to Ebola. Our plan meets immediate needs in West Africa and will help families, communities and systems recover and rebuild over the long term. In addition to committing more than $1.5 million in private resources, CRS has leveraged our health, food security and education programs to respond to the outbreak. 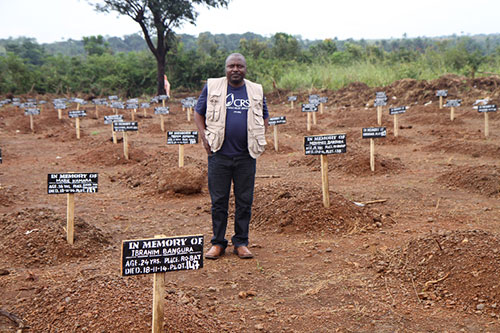 In the district of Port Loko, cemetery teams bury between 20 to 30 people per day. Photo by Donal Reilly/CRS
CRS is currently working in the following areas to help curb the spread of the virus:

"We've seen the positive impact U.S. aid can have on the ground," says Bill O'Keefe, CRS' vice president for Advocacy. "But without sustained support from the U.S. Government, we could see a reversal in this trend."

Read the latest update from CRS country programs and partners around the world as they respond to... END_OF_DOCUMENT_TOKEN_TO_BE_REPLACED

Read the latest two-page summary from CRS country programs and partners around the world as they... END_OF_DOCUMENT_TOKEN_TO_BE_REPLACED