Catholic Relief Services is continuing our response to the Ebola outbreak in West Africa by capitalizing on our long history in the region, and our broad community and Church networks. The Ebola outbreak that began last March has killed more than 8,800 people. While we have seen a turning point in the fight against Ebola—the number of cases continues to decline in Guinea, Liberia and Sierra Leone—the outbreak has significantly impacted the affected countries' economy, health and education sectors. 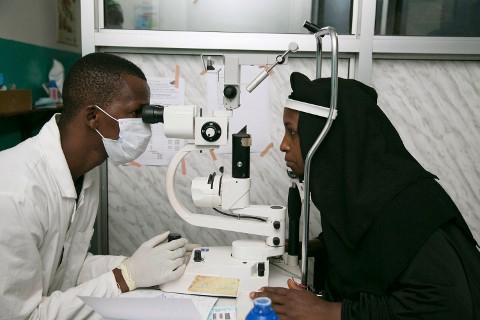 In Guinea, hundreds of healthcare workers like Dr. Ibrahim Bary, have recently participated in training that aims to reduce the risk of Ebola transmission at health facilities. Photo by Michael Stulman/CRS

"Despite declining cases in West Africa, we are not at zero yet," says John Service, CRS' Ebola response coordinator. "Until communities are Ebola free, we cannot altogether move on to recovery and rebuilding. Even one case can lead to another epidemic."

"What is needed now is vigilance," he says. "We need to continue to invest in public education on Ebola prevention, infection control trainings for health care workers, and safe and dignified burials."

CRS has committed more than $9 million to our emergency response, focusing on breaking the cycle of Ebola transmission:

CRS also supports families that have been affected and whole communities that have been quarantined, and has started to plan for the long recovery process. In the near term, our main priorities include the following:

Ebola has strained already weak health systems in the region. To date, CRS has trained 3,000 health workers, provided personal protection equipment to health workers in Guinea and Liberia, and helped provide routine health care to an estimated 3 million people. We also supported the reopening of St. Joseph's Catholic hospital in Monrovia, Liberia's capital. The hospital treats Ebola patients and offers routine health care, which has largely become unavailable due to stress on the health system.

Since the onset of the outbreak, we have worked to curb transmission of Ebola through programs that aim to educate people and change their behavior. CRS has used mass media, including radio and text messages, and trained religious leaders and volunteers to raise awareness and promote behavior change.

Agricultural activities, including this year's harvest, will be heavily impacted. Many farm families have lost productive members and some have been unable to access their farms because of travel restrictions and quarantines. CRS is building on our expertise to help families cope with and recover from loss of income and the impact of increased food prices. We are distributing food to affected families, orphans, widows, discharged patients and other vulnerable communities, and have reached more than 120,000 people to date. 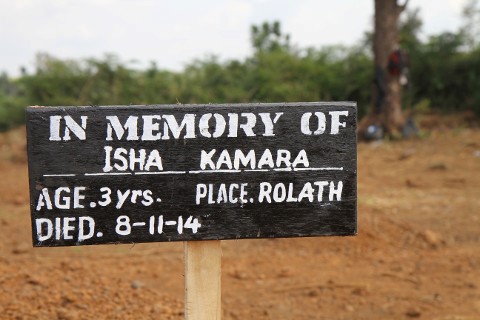 CRS is supporting the District Medical Office with the safe and dignified burials of Ebola victims in 3 districts in Sierra Leone. Photo by Donal Reilly/CRS

Traditional burial practices have been a huge challenge to containing the Ebola outbreak. While washing deceased bodies is an important part of West African cultures, it exposes family members to infectious bodily fluids. In Sierra Leone, CRS is helping manage thousands of safe and dignified burials in three districts to prevent further infections and respect families' religious practices. CRS is now expanding the program to Kenema, Sierra Leone's third-largest city. The agency is also collaborating with religious and traditional leaders to ensure access to, and acceptance of, safe and dignified burials.

Guinea, Liberia and Sierra Leone are among 83 countries that do not meet the World Health Organization's minimum recommended number of health care providers. Building strong health systems will require expert technical assistance to key stakeholders, including ministries of health, local technical organizations, civil society organizations and faith-based health networks. Faith-based institutions play a vital role in the health systems located in poor countries, and CRS has years of experience in strengthening these systems. To help fight the HIV pandemic, CRS provided lifesaving HIV care and treatment services to more than 700,000 people through 276 health facilities in 10 countries by working largely through rural and faith-based facilities.

We urge Congress to support emergency funding that commits $2.9 billion to fight Ebola in West Africa. We urge the U.S. government to lead the development and funding of a coordinated, long-term humanitarian and development strategy that rivals that of its HIV and AIDS response in scale and scope.

Encounter our migrant and refugee sisters and brothers through Scripture, photos and video in this... END_OF_DOCUMENT_TOKEN_TO_BE_REPLACED

Read the latest update from CRS country programs and partners around the world as they respond to... END_OF_DOCUMENT_TOKEN_TO_BE_REPLACED

Each year, Congress negotiates how to spend U.S. taxpayer dollars through a process called... END_OF_DOCUMENT_TOKEN_TO_BE_REPLACED