Climate change affects lives each day around the globe. From summer heat waves to drastic floods, it touches the wealthiest individuals living in modern cities and the poorest in developing countries. The effects of climate change can reach far beyond the expected ecosystems, economic sectors and populations. 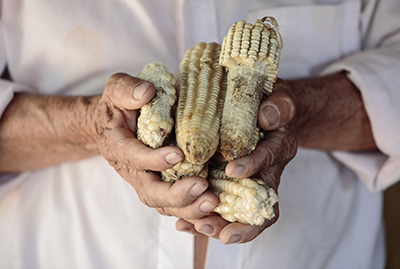 CRS and our partner in El Salvador are helping farmers like Candido Hernandez Orellana build back harvests ruined by drought. Photo by Oscar Leiva/Silverlight for CRS
On March 19, from 8:30 to 9:30 p.m. local time, cities, landmarks and businesses around the world will turn off their lights for one hour. The goal of this Earth Hour is to highlight climate change dangers.

Climate change is happening now, and predictions for the future are grim.

Below are five of the most shocking climate statistics that you may have been in the dark about:

This startlingly high number, provided by the International Disaster Database at the Center for Research on the Epidemiology of Disasters, is up from 8,056 in 2014, showing just how dangerous climate change is becoming. There is a pressing need to adapt to climate change in order to protect lives threatened by droughts, fires, heat waves, storms, floods and landslides.

This data from the International Disaster Database highlights the huge economic impact. Besides the social, physical, and environmental needs, among many others, to mitigate and adapt to minimize future damage, there is an increasing economic need as well.

According to the U.N. Office for Disaster Risk Reduction, the United States had the highest number of disasters, followed by China, India, the Philippines and Indonesia. Resilience and disaster planning are needed to reduce risks and mitigate impacts of floods, heat waves, droughts and other potentially catastrophic climate-related events.

This estimate from the World Health Organization accounts for the detrimental effects of climate change on vital basic resources, such as clean air, safe water, adequate nutrition and protective shelter. WHO also estimates 250,000 more deaths will occur annually between 2030 and 2050 because of climate change.

These numbers underscore the great sense of urgency to act against climate change to protect innocent lives.

Patricia Holly, a University of Notre Dame student, contributed to this article.

Learn More About Our Common Home and Climate Change

Pray and reflect with your community on our call to respond to the needs of our sisters and... END_OF_DOCUMENT_TOKEN_TO_BE_REPLACED

Reflect on the impact climate change has had on our planet and pray for the Holy Spirit to change... END_OF_DOCUMENT_TOKEN_TO_BE_REPLACED