Earth Day and the Sabbath Commandment

When we speak of the “environment”, what we really mean is a relationship existing between nature and the society which lives in it. Nature cannot be regarded as something separate from ourselves or as a mere setting in which we live. We are part of nature, included in it and thus in constant interaction with it… 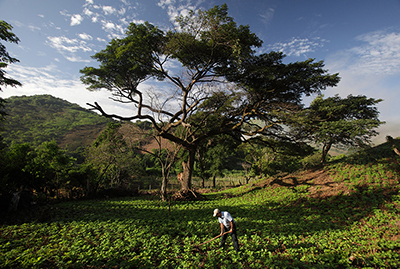 Isabel Gutierrez weeds his bean field in Matagalpa, Nicaragua, caring for God’s creation. Using new technology from CRS, his co-op quadrupled its average bean yield. Photo by Oscar Leiva/Silverlight for CRS
The Third Commandment given to Moses allowed the Israelites a day off from work. It reflected God’s rest during creation and offered a benefit few laborers received in those days.

God also extended the Commandment beyond just labor: he designated every seventh year as a time of rest for the land. This could have worried an agrarian community. How would they eat if they did not tend the land?

But God promised that if his people honored the Commandment, he would provide for them. And although manna would normally rot if it was not eaten the same day it was collected, on the day before the Sabbath, the Israelites could collect enough manna to carry them through.

To this day, some farmers still practice good stewardship of the land. They know that letting land go fallow restores and replenishes soil. So each year, they plant on selected acres and let another part of the farmland rest.

Earth Day was first observed in 1970, but from this perspective, we are simply catching up with an ancient truth: there is more value in the earth than is gained by wringing every last grain from overtaxed soil.

Only trust in God’s providence allows us to fearlessly let land go fallow for a time. When we and our land take rest, we are gradually restored. Paradoxically, we become more productive.

And for those places where the land must be fed, CRS serves farmers in restoring fertility and productivity. Following organic practices used in the United States and Europe, we help farm families see rapid soil improvement thanks to cover crops, green manure and companion planting. Many of these practices also mitigate the effects of climate change.

Pray and reflect with your community on our call to respond to the needs of our sisters and... END_OF_DOCUMENT_TOKEN_TO_BE_REPLACED

Reflect on the impact climate change has had on our planet and pray for the Holy Spirit to change... END_OF_DOCUMENT_TOKEN_TO_BE_REPLACED