When fighting erupted in mid-December, Ayen Garang, a single mother of four, fled her village in Jonglei State, South Sudan, not far from one of the army barracks. Like the majority of the displaced, Ayen and her family fled with only the clothes on their backs and one or two items. In her case, she carried a baby carrier and one blanket. Ten days later, she crossed the Nile River in a small boat provided by a "good-hearted Christian" and landed in the relative safety of neighboring Lake State. 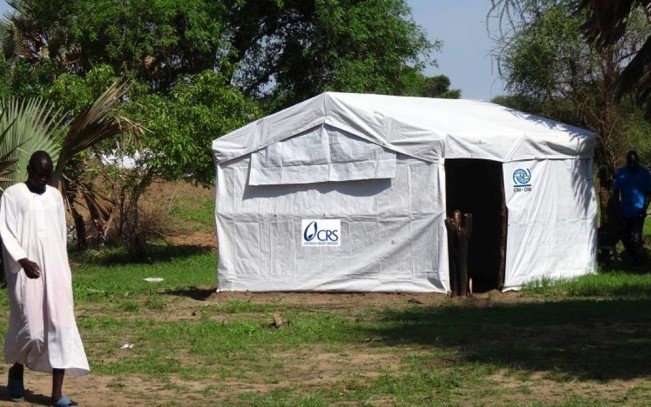 Ayen and her children, along with other people displaced from Jonglei, sought protection from the conflict in the towns of Kalthok and Yolakot. There she found people living in shelters made from blankets and sleeping under the open sky. The onslaught of heavy rains and blazing heat were major problems for families like Ayen's. Lack of clean water and hygiene facilities caused communicable diseases to spread—especially among children.

Under the Strengthening Resilience project, funded by the Office of U.S. Foreign Disaster Assistance, Catholic Relief Services supported families with hygiene, household and shelter kits so they could build temporary homes. Ayen made a tent with the two tarps and poles CRS provided. It protected her family from the harsh sun and winds during the dry season, but once the rainy season hit, Ayen's shelter quickly filled with water. She needed better shelter, but it was difficult to find the proper materials.

Since May, through the Internally Displaced People Shelter Response project funded by the Crisis Humanitarian Fund, CRS has been helping families build sturdier housing. The robust shelters use locally available materials and the design preferences of the displaced communities. Local construction teams trained by CRS build homes with tarps, wood and bamboo poles using cross-bracing techniques that withstand high winds and rain. With CRS' support, displaced communities in Kalthok and Yolakot have constructed homes for 2,500 displaced families.

After moving in to her new shelter, Ayen quickly arranged her things. At one corner she keeps her family's utensils: a CRS-branded jerry can, buckets and a basin. In another, she stores blankets. The family cooks outside.

"I am happy to have received this great help from CRS," says Ayen. "My house is good, and the space is relatively enough for us."

"I had difficulties in the recent past when I was living in the bush. Snakes and other dangerous animals disturbed me with my children," Ayen says. "I suffered from cold at night and the hot sun between December and May. Heavy rains with a lot of storm hit us hard in this place. Today, I feel relaxed—no rain to fear."

Read the latest update from CRS country programs and partners around the world as they respond to... END_OF_DOCUMENT_TOKEN_TO_BE_REPLACED

Read the latest two-page summary from CRS country programs and partners around the world as they... END_OF_DOCUMENT_TOKEN_TO_BE_REPLACED