Le Van Thuong is a messenger of change. 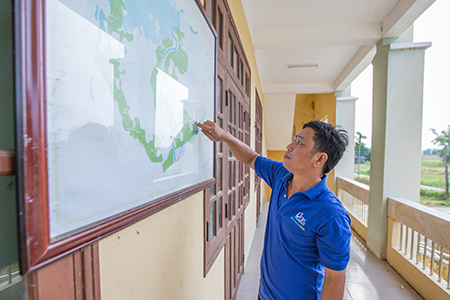 As a result of community engagement, Thuong and his TSG have produced a local hazard map to keep villagers safe from climate threats. Photo by Lisa Murray for CRS

Every few days Thuong rides his motorbike around his home district of Tien Phuoc, a typical agriculture-reliant coastal community in Vietnam’s Quang Nam province, surveying the community, safe in the knowledge it is now better prepared to withstand the increasingly intense natural hazards that have threatened lives and property in recent years.

“I have a lot of interaction with the community. I’m from here. I like that I can contribute meaningfully to it,” says Thuong, who happily interrupts his rounds to check on households and reinforce the importance of disaster preparedness in this natural disaster-prone province.

The 41-year-old father of two, though, is more than a good Samaritan.

As one of seven members of his district’s all-volunteer technical support group, Thuong has invested the past 18 months in building his community’s resilience to climate-related risks as part of a sustainable partnership with Catholic Relief Services. 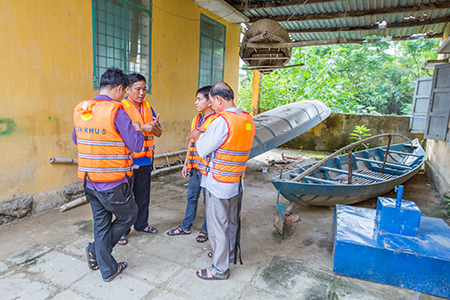 “When there were disasters before, people suffered because there weren’t good plans. To see people well prepared now, with more disaster resilient houses, makes me feel very happy,” syas Thuong.

With its long coastline and agricultural economy, Vietnam is one of the world’s most vulnerable countries to climate change. And yet, historically, risk reduction plans were developed with limited consultation of local people. Disaster responses were often on an ad hoc basis.

To reverse this top-down planning and give communities a voice in building their resilience to natural hazards, CRS worked with vulnerable populations and local governments across seven natural disaster-prone districts. The effort helped raise awareness and initiate a participatory approach to disaster risk management.

This community-based model helps people identify, assess and reduce the risks of disasters and find solutions to challenges, such as how to protect rural livelihoods and houses. 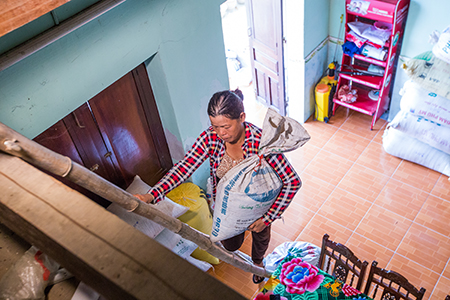 To achieve this, CRS recruited leaders such as Thuong, head of the local farmers’ union for 23 years, to form support groups and spearhead change within communities.

After a series of CRS trainings—on topics like livelihood protection and shelter strengthening—the support groups visited each community to evaluate and develop a risk reduction plan tailored to needs expressed by villagers. The plans themselves were funded by local governments.

The support groups later returned to the communities for quarterly follow-up meetings and to share new preparedness and adaptation techniques.

With support group members also embedded within communities, Thuong and his colleagues are on-hand to provide advice and support on an informal basis. 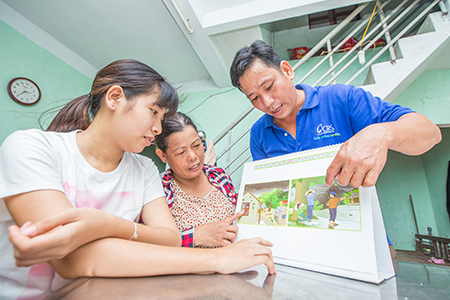 Thuong explains flood evacuation procedures to Dinh Thi Xuan and daughter Thao, who have stopped by the local community center to seek the support group’s advice. Photo by Lisa Murray for CRS

“Now communities act based on their own action plans and their voices are heard. The plans incorporate people’s needs, they are more realistic. It makes me proud [to help villagers],” says Thuong.

Dinh Thi Xuan is a beneficiary of Thuong’s support.

She now knows how to protect her prized pigs, a valuable source of income, from floodwaters with a newly constructed elevated cage. Xuan, her  mother and 20-year-old daughter Thao, also have an early warning system and evacuation plan in place.

“The project helped us identify risks and who is most vulnerable. Now, we have a specific list of things to do and know when to take action. Before, we were just told very general things to prepare for a disaster,” says Xuan, who also grows rice and corn.

The community’s evacuation plan includes two new CRS-funded boats to take villagers to safety during peak flooding. One recently helped a woman reach the hospital to give birth. 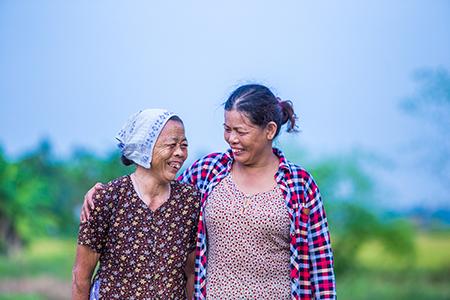 Xuan and her mother now have peace of mind with an early warning system and evacuation plan that will help protect them during destructive storms. Photo by Lisa Murray for CRS

“We also now have life jackets to wear on the boat and headlights for navigation. Things are now better for us with the support groups,” says Nguyen Thi Thanh Xuan, a 30-year-old mother of one. The new aluminum boats carry up to nine people, in contrast to just three on the old bamboo rafts.

With 47 tailored disaster plans implemented across communities, these women are just two of the 3,511 direct and 54,464 indirect beneficiaries reached by this CRS project, which also has great potential to be scaled-up to other provinces across Vietnam.

“This community-based disaster management model introduced by CRS has proven so successful that district-level governments … [have replicated] the model in 107 communities outside the project area. Given the emerging needs of urban areas, CRS has entered into partnership with the Vietnam Disaster Management Authority at the national level,” says Jules Keane, CRS Vietnam country manager.