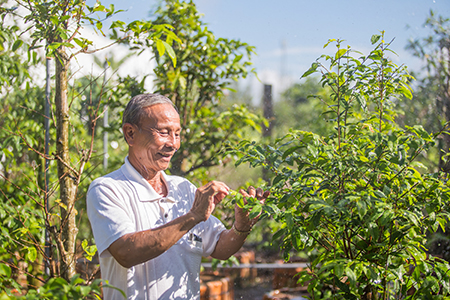 Nguyen Van Ba’s income is secure since strengthening his plant business by participating in a CRS severe weather project. Photo by Lisa Murray for CRS

With over 2,000 miles of coastline, Vietnam’s highly-populated and fast-growing urban areas are also struggling to adapt to the intense natural hazards that have increasingly damaged the country in the past decade.

Communities in the expanding low-lying urban areas of the Mekong Delta, in the far south of the country, are particularly vulnerable. In response, Catholic Relief Services is at the forefront of efforts to help urban Delta communities adapt—and survive.

Ba’s business continuity plan has allowed him to save income on ineffective climate mitigation responses in favor of effective action to safeguard his business. Photo by Lisa Murray for CRS

Says Jules Keane, CRS Vietnam country manager, “Given the emerging needs of urban areas, CRS has entered into [important] partnership with the Vietnam Disaster Management Authority at the national level to develop the guidelines expected to serve as a reference for national urban Community-Based Disaster Risk Reduction Management programs taking place throughout Vietnam.”

Tien Giang is a typical Delta province. There, in the Go Cong district, CRS embarked on a two-year project to engage individuals and the local government. The Community-Based Disaster Risk Reduction Management project used an innovative, community-based model that stimulates lasting change. With this approach, residents worked together to identify climate risks to urban livelihoods, assets and their well-being. 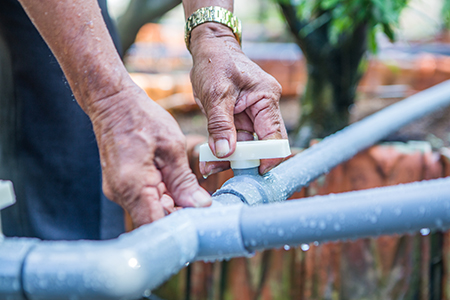 The project supported Ba to develop a water system to overcome dry spells that result in saltwater intrusion into the delta and salinity in the town’s water system that supplies his nursery. Photo by Lisa Murray for CRS

The project revealed that a critical feature of building a community’s resilience is strengthening its small businesses—the driving force of Vietnam’s economy—against disaster and climate risks.

Nguyen Van Ba and his bonsai plant business, a key source of income for a household of seven, are direct beneficiaries of this CRS project. In recent years, sustained dry spells—resulting in saltwater intrusion into the delta and salinity in the town’s water system that supplies the nursery—have killed off scores of his carefully nurtured plants and cost him up to 70% of his annual income.

“It makes me feel very sad as I spent a lot of time taking care and lost some very beautiful plants. One year I discovered they were dying and so did my neighbor. We thought to use more water, but the [highly saline] water made them die [even faster],” Ba says. 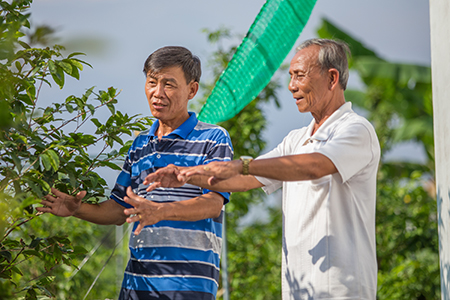 To address this and other climate-related stresses, the project engaged 60 small businesses to identify climate-related risks and develop business continuity plans to overcome severe weather through preparedness and response planning.

This resulted in Ba developing a low-cost and easy-to-apply business plan that not only helps him to avoid asset and income losses, it is forecast to boost profits by 10%.

“I now know how to identify risks, prepare and keep the business going [after a prolonged dry spell or storm],” said Ba, who also learned how to streamline production of the bonsai plants through a new watering technique. He is now looking to expand his business.

As part of the program strategy, Ba and other beneficiaries are encouraged to promote their experience within the community and business networks to broaden the project’s reach. 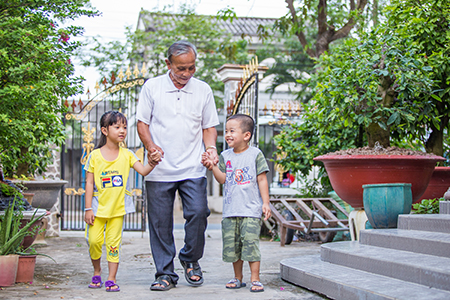 Ba is committed to handing down his valuable climate resilience knowledge to the next generation to run the family business as well as other small enterprises in Go Cong town. Photo by Lisa Murray for CRS

“I have shared the knowledge and skills [from the project] with my neighbors and other bonsai growers in my network—at least 30 to 40 people so far—and talked about the business continuity plan at cluster [community] meetings,” Ba says.

Having helped plant the seed for Community-Based Disaster Risk Reduction Management to grow within project sites, CRS further cultivated it with a range of activities. Technical support groups were established to engage communities, and trainings for local government staff on adaptive and protective measures against typical natural hazards were conducted. CRS also provided communications materials on community-based risk reduction and climate adaptation.

In total, these activities reached an estimated 6,900 urban community members and 120 members of local service organizations and government officials to strengthen their communities resilience to disaster and climate risks.