"Now the land is bare after the destruction by the locusts.”

In January, 56-year-old Roba Wako was at his farm in Northern Kenya when he heard a buzzing in the distance. Moments later a massive desert locust swarm descended on his crops, consuming everything its path.

“They were here for just one day, not more than 20 minutes. But they totally destroyed all the beans, all the maize and the teff,” says Roba, who lives just a short drive outside of Marsabit town. “It’s a very bad insect.” 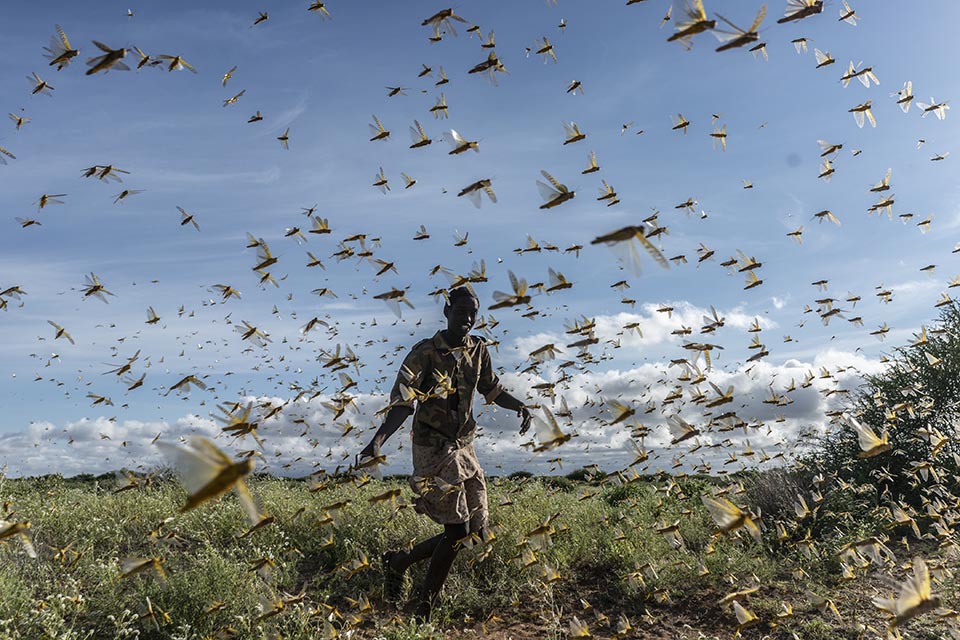 A young man chases away a swarm of desert locusts in Samburu County, Kenya.

Photo by Fredrik Lerneryd for CRS

Desert locusts are the most destructive migratory pest on the planet. A swarm covering less than half a square mile can include up to 80 million mature locusts with the capacity to consume the same amount of food as 35,000 people in a single day, according to the U.N. Food and Agriculture Organization.

This year East Africa has faced the worst invasion of locusts in a quarter century, as the largest swarms on record impacted millions of acres of farmland and pasture. Combined with significant economic downturn as a result of the COVID-19 pandemic, the locusts pose an unprecedented threat to food security in a region where more than 31 million people are already experiencing some degree of hunger due to factors such as drought, sporadic flooding and conflict.

With funding from a private donor, Catholic Relief Services is supporting county governments in Kenya on a number of recovery activities that include providing drought tolerant seeds to farmers, rehabilitating rangelands by managing invasive species of plants, reseeding grazing lands, cash-for-work activities to support livelihoods, and continued surveillance of desert and tree locusts. 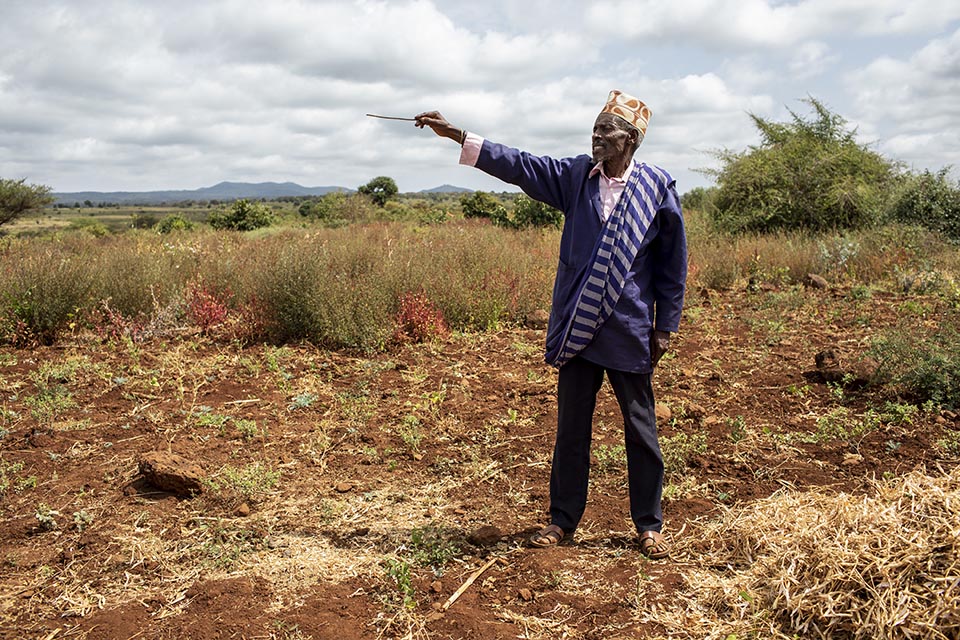 Roba Wako describes how desert locusts ravaged his crops outside Marsabit town, Kenya. East Africa has experienced the worst invasion of desert locusts in 25 years, as swarms have damaged crops and grazing lands.

This assistance is desperately needed. In Marsabit and Isiolo counties, where the vast majority of people depend on livestock and agriculture for their livelihoods, the loss of crops and grazing lands have placed many in peril.

“Before I didn’t have to buy food. I just used to depend on the beans and vegetables I grow here on the farm. But everything was affected by the locusts. Now I have to buy everything,” says Abdi Guyo, also a farmer. “Sometimes we don’t fill our stomachs as we had before.”

Like Roba, Abdi’s crops were picked bare by the locusts earlier this year. Since then both farmers have had to sell livestock in order to purchase food and other essentials.

“The main problem is not even now. What I anticipate ahead will be more difficult than the current situation,” says Roba, pointing out that because he was not able to harvest a crop this season, he will likely have to butcher or sell his animals to make ends meet. 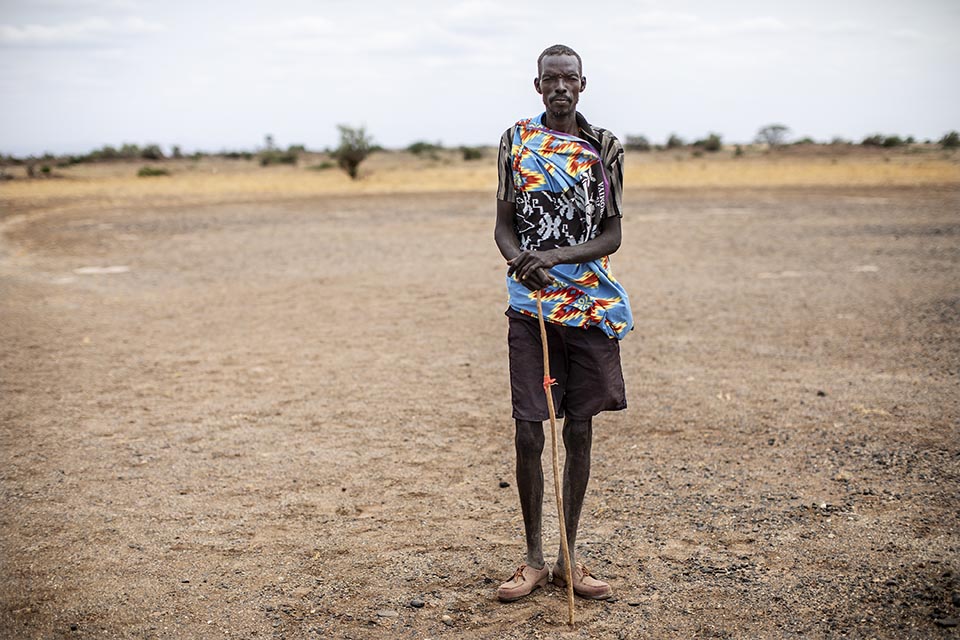 “Another problem is that I don’t even have any money to start preparing the land for planting. The rainy season is coming soon, and I have no money for seeds,” he says.

Hassan Charfi, deputy director of agriculture for the government of Marsabit County, says that pastoralists have been hurt as much as farmers because of the loss of grazing lands.

“The desert locust actually devastates within no time. It moves in millions and it feeds on all the palatable resources,” says Hassan. “The pasture was seriously affected. In turn, the livestock were also affected. The impact is so huge that the rangeland could not sustain the livestock.” 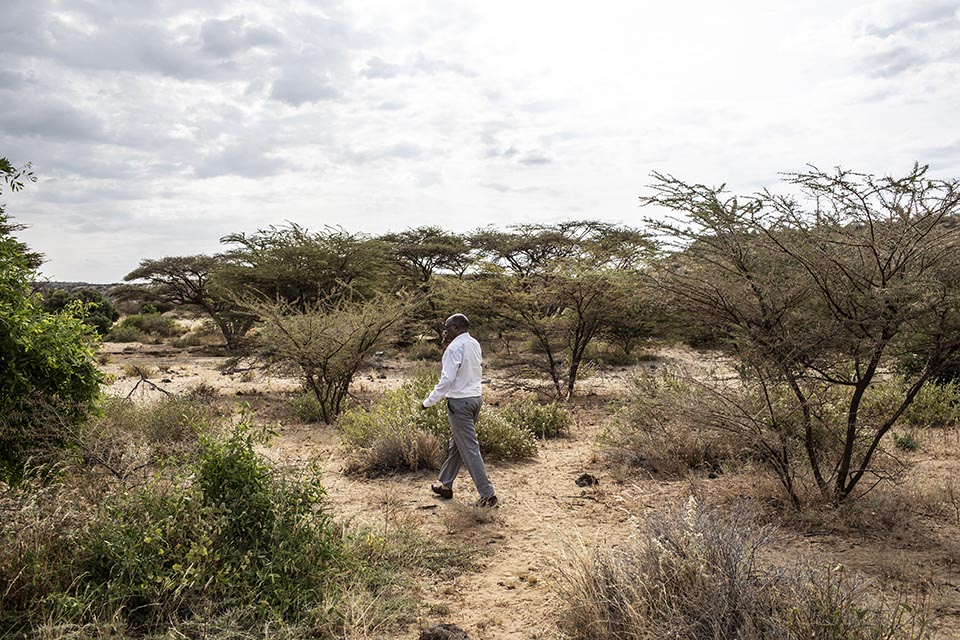 Hassan Charfi, deputy director of agriculture for the government of Marsabit County, checks over an area that was sprayed for desert locusts.

That means pastoralists like Molu Barille have had to travel further and further afield with their animals in search of adequate pasture.

“In normal days these grazing lands could have sustained us through the next rainy season,” says Molu. “The locusts eat everything and just leave the stems. They eat all the leaves; they eat all the soft parts of the plants. Now the land is bare after the destruction by the locusts.”

“Because of the locusts, I had to bring my animals here [to Bambal area]. It is 18.5 miles from where I come from. Locusts have devastated that area … the vegetation is gone. That is why I had to move to this place with my livestock.” 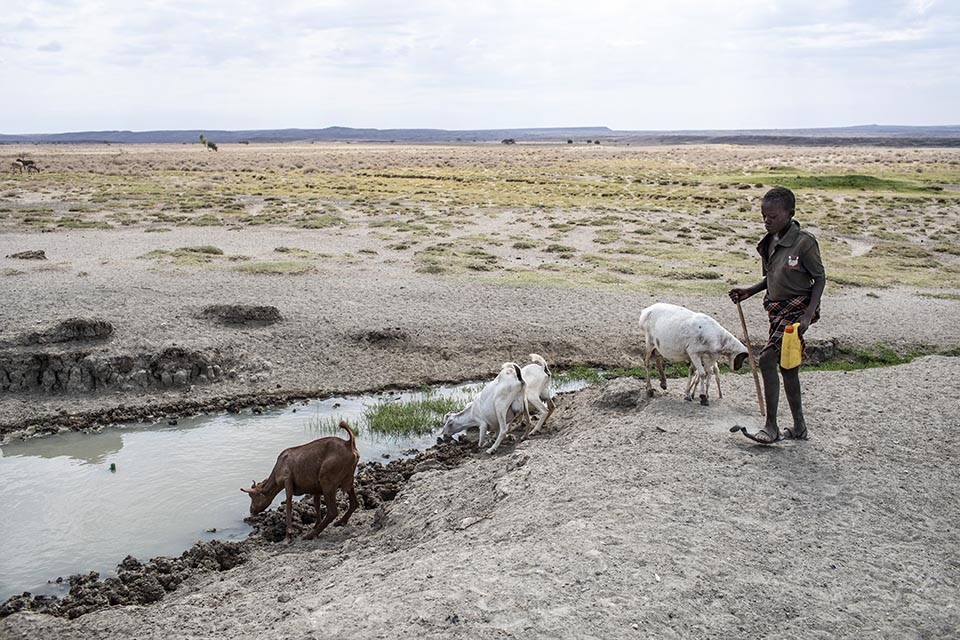 A young pastoralist brings his goats to drink at a spring in rural Marsabit County, Kenya. East Africa has experienced the worst invasion of desert locusts in 25 years, as swarms have damaged crops and grazing lands.

“Milk production is the thing that has been affected the most. I used to sell milk, but right now we do not get enough milk,” he says. In the relatively barren region of Northern Kenya where Molu lives, most pastoralists are entirely dependent on their livestock as a source of food, milk and income.

For now, the swarms have mostly moved on from Kenya, migrating on the winds to other countries in the region.

‘Need to look ahead’

That means the government can now focus on recovery efforts, which Hassan says will take time.

“The communities—the farmers and the pastoralists—need to be supported so that at least they can recover from the losses that they've experienced,” he says.

“We need to look ahead and see how best we can address this issue with the communities, and support them in their recovery, support them with trainings and prepare them for any eventuality.” 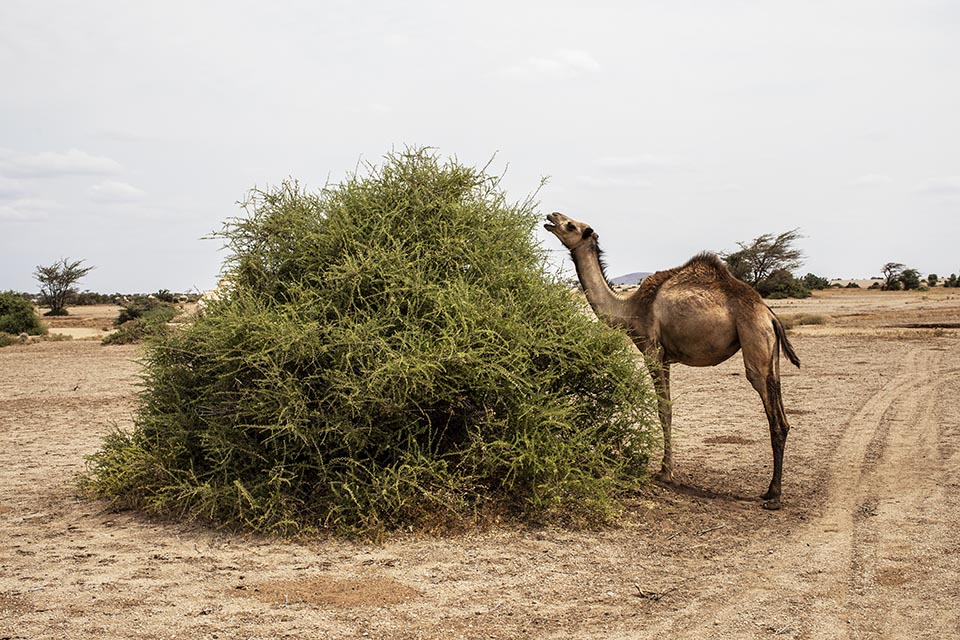 A camel feeds on an indigofera spinosa, a shrub that has been heavily impacted by desert locusts, in rural Marsabit County, Kenya. The soft leaves of the plant, which sustain camel herds across the region, are also a prime target for locusts.

Not far from where Molu grazed his sheep and goats, Hassan and the CRS team came upon an area still scattered with locusts.

“We are fearful that this can be a recession area. It’s going to be a very dangerous situation should that happen because we are going to have locusts invading from this county to nearby counties within Kenya and elsewhere in the region.”

Pray and reflect with your community on our call to respond to the needs of our sisters and... END_OF_DOCUMENT_TOKEN_TO_BE_REPLACED

Reflect on the impact climate change has had on our planet and pray for the Holy Spirit to change... END_OF_DOCUMENT_TOKEN_TO_BE_REPLACED