It was not enough that Bintu Abubacar had survived the unfathomable atrocities that Boko Haram brought to her village in northeast Nigeria—the explosions, the bodies slaughtered and burned. 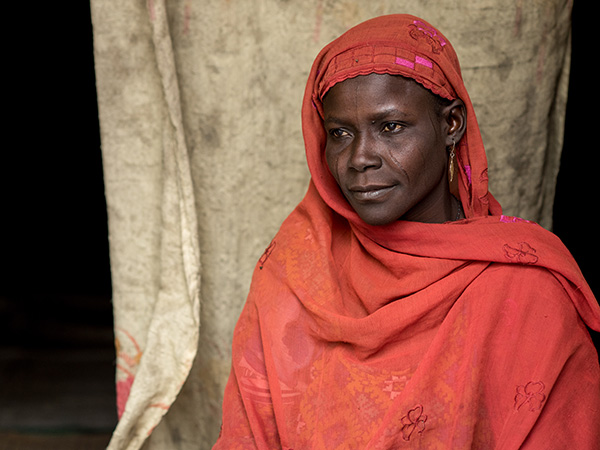 Bintu Abubacar traveled for 3 days and 40 miles to get away from Boko Haram in northeast Nigeria. Photo by Michael Stulman/CRS

It was not enough that she had managed to avoid the carnage Boko Haram had brought to her region for the past 15 years: torture, rape and pillage.

It was not enough that to escape Boko Haram she and her husband and their nine children had run for 3 days and 40 miles, without food and water, until it felt like they had reached the edge of the world.

It was not enough that in fleeing she had lost her unborn child. Or that once they had reached the region’s capital city, Maiduguri, another son died in an explosion.

On top of all that, after arriving in Maiduguri and feeling a fleeting moment of victory, Bintu quickly realized that her family had to survive with no income, no farm and no livestock.

“Before we had enough,” Bintu says in a soft voice, full of the pain and sorrow of her plight. “Our kids ate good food. We had a small shop, and our kids were in school.” 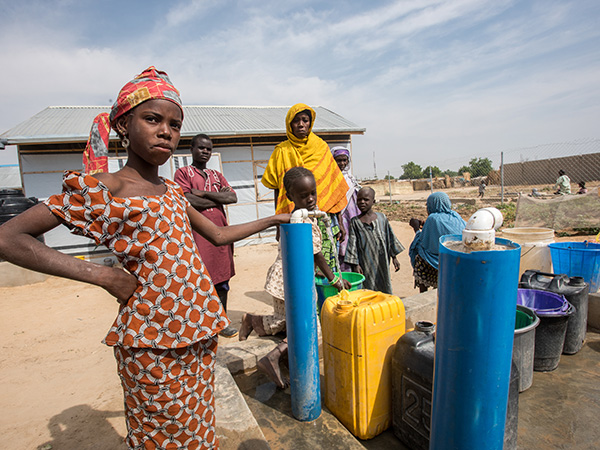 Now all of that is gone. Her husband, who was a driver in their village, cannot find work. Bintu sells firewood she collects in the bush to pay their $4-a-month rent. It buys basic shelter in a crowded and unsanitary building where she fears for her children’s health. There is no money for medication.

With support from USAID’s Office of Food for Peace, CRS gave Bintu a debit card that she can use like cash to purchase food.

“Now we can eat two to three times each day,” she says. “We can buy what will sustain us: milk, eggs and vegetables.”

A change comes over Bintu. She raises her head and speaks with a confidence that shows remarkable resilience.

“I couldn't have fed my children without assistance from CRS,” she says.

More than 163,000 people in northeast Nigeria have benefited from debit cards like the one Bintu received. The cards have two major benefits: access to food for displaced people and host communities; and support for the local economy through payments to local shops.

While security has improved in Maiduguri, suicide bombings are not uncommon.

A few days after Bintu was interviewed for this story, 18 people were killed in four simultaneous suicide attacks around her neighborhood.

Insecurity across the region—in Nigeria, Niger, Chad and Cameroon—has displaced more than 2 million people. According to the United Nations, half of the region’s population needs urgent humanitarian assistance.

CRS is responding in all four countries.

HELP WHERE IT’S NEEDED MOST >

Read the latest update from CRS country programs and partners around the world as they respond to... END_OF_DOCUMENT_TOKEN_TO_BE_REPLACED

Read the latest two-page summary from CRS country programs and partners around the world as they... END_OF_DOCUMENT_TOKEN_TO_BE_REPLACED