I help my community members understand the effect of the climate on their agriculture. I show them how to cultivate, how to adopt climate smart agriculture.

Like many Sudanese farmers in Central Darfur, Adam’s agriculture failed for three seasons, leaving the father of seven children helpless, without income, and with little hope on the horizon.

“When your agriculture fails, it means you have no money, nothing to do and you cannot feed your children,” Adam says.

In Darfur, a war-torn region notorious for its longstanding conflicts, about 90% of the population depends heavily on agriculture for personal consumption, livelihoods and income.

Conflicts over natural resources, farm land and inadequate governance have made life hard for the residents of Didima, Central Darfur, where Adam and his family live. In 2003, a conflict between herders and farmers reached its peak, resulting in mass displacement, forced migration, tremendous movement across borders, social tension, massive loss of livelihoods and a large-scale loss of life. When these extremely vulnerable villagers returned, they carried with them deep psychological scars. 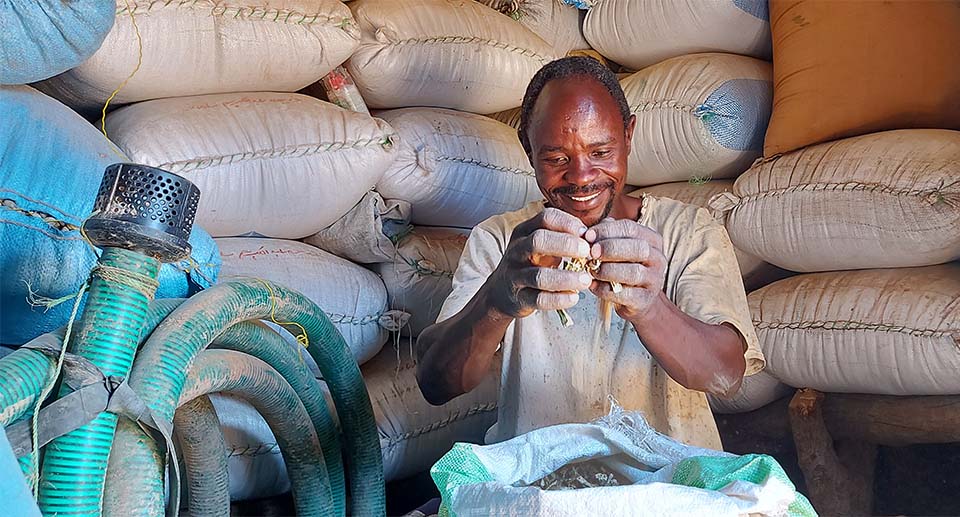 Adam stores crops that include okra and sorghum for his family’s consumption.

In Central Darfur man-made disaster is not the only enemy that residents face. Unpredictable climate in the region menaces farmers and their soil, which loses fertility from excessive use, floods and lack of replenishment. In recent years, rainy seasons have been unpredictable and ranged from acute shortages to deadly torrential rains.

“For the last three years, we simply lost our passion, and our patience has almost run out. My agriculture failed due to heavy rains, and poor fertility of the soil. Many farmers reaped nothing, and many others were forced to leave their homes and look for alternative livelihoods. I even decided to leave to go somewhere else. It was not working and I had no strength to look at the eyes of my crying children,” Adam says.

With funding from the Foreign, Commonwealth & Development Office, Catholic Relief Services worked with five international partners, including Tufts University, to launch the second phase of the Taadoud project in 2017. Taadoud translates as solidarity in Arabic. The project focuses on improving natural resource management and governance, reducing chronic malnutrition and increasing the resilience of livelihoods of returnees and conflict-affected vulnerable populations in all five Darfur states. The project directly supports 177,583 returnees and conflict-affected vulnerable households.

Adam was among the most vulnerable people identified by the project team. Through the project, participants increased their knowledge and improved skills necessary to survive a fluctuating and unpredictable climate. 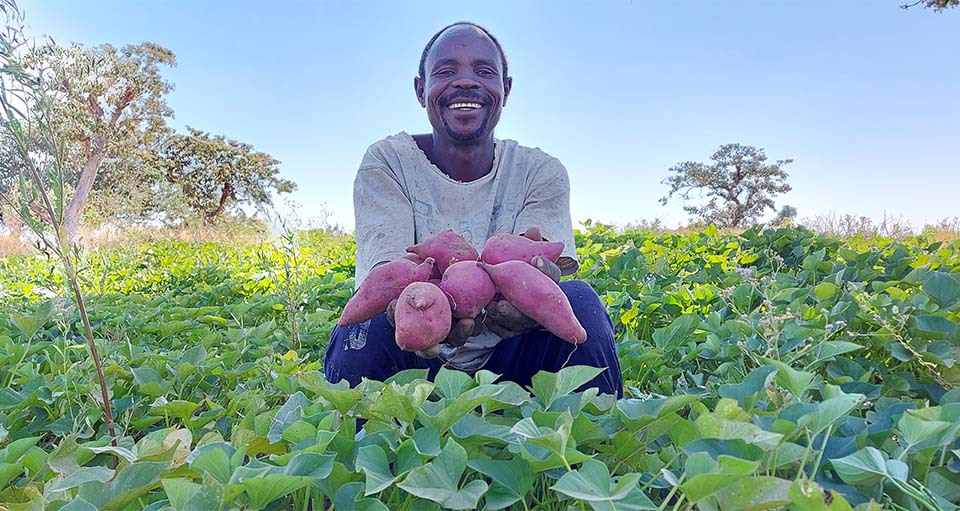 Adam holds a healthy sample of improved crops that he grew despite erratic weather patterns that had contributed to three failed growing seasons.

“In the past, we used to follow very primitive ways to farm our land. We followed techniques that we inherited from our forefathers. After participating in the trainings, we realized that we were following very unproductive ways, we even discovered our previous farming practices were killing the soil,” Adam says.

“After participating in the training, I knew that climate change was the problem but also I knew that we were not doing it right! And I decided not to leave, I decided to have a try with the new techniques. Although I received seeds, the only issue I still had to face was money, I did not have money to start farming. I tried to borrow money from friends, but it was all in vain,” Adam says.

Among other components of the project, a CRS Savings and Internal Lending Communities program was organized in Dedima. The savings group aims to increase financial services and help farmers and pastoral groups save money and create a social fund for emergency needs. Members pool their money, save over time, and borrow to meet pressing needs and develop business opportunities.

Adam heard about the savings group and joined one with 25 members. He took part in the group activities and soon after, borrowed a sum of money to cultivate his land.

“I cultivated over two and a half acres following the techniques I learned. The result was incredible, I grew okra, sorghum, groundnuts and sweet potatoes,” Adam says.

During this season, Adam managed to harvest 15 sacks of sorghum, 10 sacks of groundnuts and 100 sacks of sweet potatoes.

“The training pays off! I even did not expect this result. I sold 100 sacks of sweet potatoes, and I stored enough sorghum and okra for self-consumption. I also made oil from the groundnuts for my family. I am planning to expand my agriculture next season, because now I know how to overcome heavy rains, soil [issues] and other climate change issues,” Adam says. 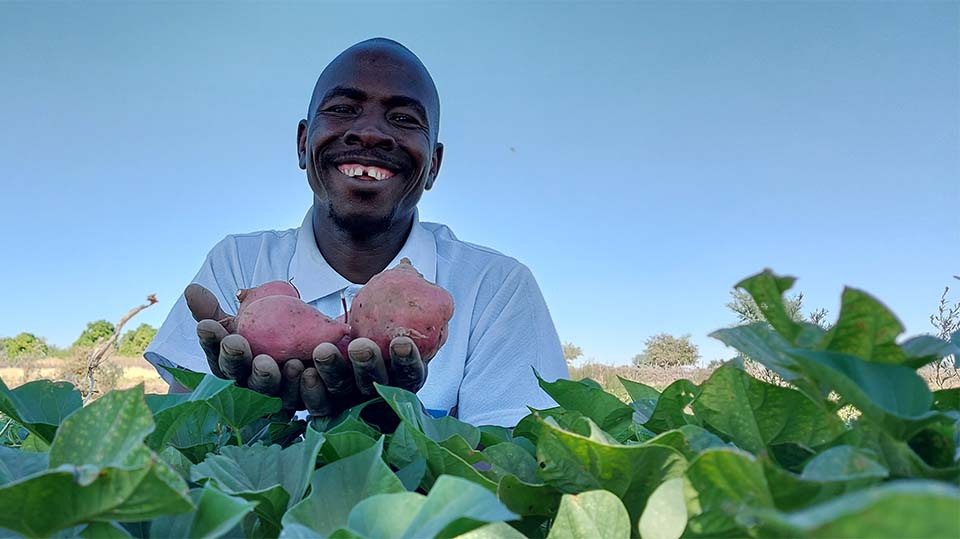 As a community extension worker, Bakeet supports  Adam from the very beginning of the farming process until the harvest. Here on Adam’s farm, Bakheet holds a sample of the success Adam achieved.

Along with its other components, the project promotes a transition from dependence on humanitarian inputs and service delivery toward continued self-reliance. To achieve this goal, a select group of individuals were trained as community extension workers to continue to deliver training to their communities and improve their knowledge and skills to increase resilience.

Bakheet Mohammed is a community extension worker in Dedima, where he raises awareness of climate change impacts on agriculture and promotes climate smart agriculture.

“I help my community members understand the effect of the climate on their agriculture. I show them how to cultivate, how to adopt climate smart agriculture. And I constantly provide consultation, and guidance to them. I already see the change now. In the past, farmers grew only one or two crops. When heavy rains or insects came, they lost everything. But now they have learned techniques such as crop diversification which mitigates the potential damage of heavy rain or anything else. Because if you simply lose one crop the others would survive, which is what is happening now,” Bakeet says.